Use a riding sail to steady your boat at anchor 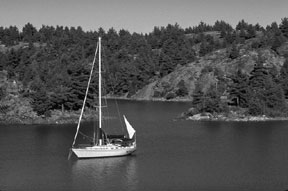 You’re all settled
in for the night in that well-protected cove, when the wind picks up.
What had been a nice quiet anchorage is now alive with motion as the wind
causes the boats to weave back and forth on their anchor rodes. Your boat
rolls and jerks from one “tack” to another, and you begin to
worry about what all this motion is doing to the set of your anchor. Your
nice quiet evening is now anything but restful.

Most
people call this weaving back and forth “sailing at anchor.”
But my favorite nickname for the activity is “horsing around”
because the image it creates is so descriptive of the motion. And while
the name may sound like fun, the motion it describes can lead to real
problems.

What
causes this phenomenon? For most boats, the center of effort (or windage)
of the topsides and rigging is well forward of the underwater center of
lateral resistance. This means the boat is out of balance while on the
hook, and doesn’t really want to weathercock. Whenever the boat drifts
backward during a gust (or there is a slight change in the wind
direction) the bow will fall off faster than the stern, putting the boat
broadside to the wind. Once that happens, the bow continues to fall off,
and the boat will “sail” away in the new direction, up to as
much as 30 to 40 degrees off the wind, until brought up short by the rode. 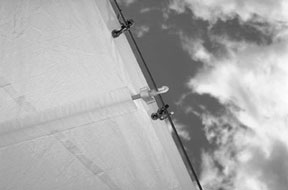 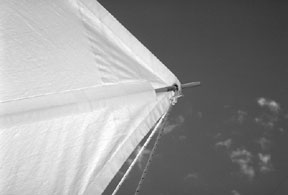 Detail of riding sail above.

It
seems as if the boat should eventually settle down, given a steady wind.
But in reality, the wind is never steady in either direction or strength
for very long. During the lulls, the boat is drawn forward by the weight
of the rode (creating slack), only to fall back and turn broadside during
the gusts.

Why all the concern?
Well, at the very least, all this weaving back and forth can make things
uncomfortable down below. More importantly, it is quite possible for two
boats anchored side by side to get “out of phase” while sailing
at anchor and actually collide. We witnessed this a few seasons ago while
anchored in Bear Drop Harbor in the North Channel on a day with gusty
25-to-30-knot winds. Two nearby anchored boats began to sheer, on opposite
tacks, and exactly out of phase. The boats kept getting closer and closer
with each tack as the skippers looked on helplessly. A collision was avoided
only when one skipper broke the cycle by letting out more rode.

By far the biggest
concern of “horsing around” is the effect it has on the set
of your anchor. The shock loads on the rode from coming up short on opposite
tacks are practically at right angles to each other, and all this stress
can eventually break the anchor free. Even if the anchor holds, the sideways
motion at the bow can chafe right through a nylon rode in a few hours.

So, if you want to
sleep better at anchor, you need to do all you can to reduce this sailing
at anchor.

But what can you do?
While we’ve never tried it, a couple of skippers we have met swear
by anchoring stern-to. This places the center of effort behind the center
of resistance, and keeps the boat steady. (It also looks really weird.)
The downside is that some boats are not very seaworthy stern-to, and most
companionways are not designed to be very weatherproof from the stern.
So I would worry about being caught in a storm anchored backward, but
in fair weather it seems to work quite well. 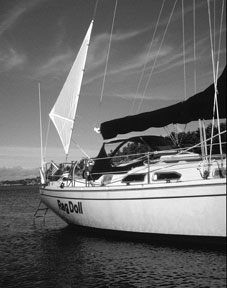 The
best thing you can do to reduce “horsing around” while at anchor
is to use a riding (or anchor) sail. We first learned about riding sails
by reading Steve and Linda Dashew’s The Bluewater Handbook. It seemed
like a good idea, so we had a local sail loft make one for us, and have
used it every night at anchor since. The ability of a riding sail to reduce
horsing around is just amazing and has to be seen to be appreciated. On
that day in Bear Drop Harbor when many of the other boats were sailing
up to 40 degrees off the wind, our riding sail kept the bow of our Ericson
38 to within five degrees of the wind direction. Considering how well
they work, it is surprising that you don’t see more of them being used.
(We’ve only seen one other riding sail in 10 seasons of cruising the Great
Lakes.)

Just what is a riding
sail? It’s essentially a small and heavily built mizzen, rigged on the
backstay, and sheeted forward. The added windage of the sail brings the
overall center of effort well aft of the center of lateral resistance.
Now when the boat drifts backward during a gust and the bow begins to
fall off to one side, the effort of the wind on the riding sail quickly
pushes the stern in and brings the boat back head to wind.

A riding sail should
be constructed board-flat, of heavy (4- to 8-ounce) cloth, with a hollow
foot and leech to reduce flutter, and a straight luff with hanks for attaching
to the backstay. Adding full-length battens to the sail is also a good
idea to reduce slatting in high winds. As for size, a good rule of thumb
is to have the sail made about the same size as a storm jib, or from 5
percent to 10 percent of the total sail area. In fact, you can use a storm
jib on the backstay as your riding sail. And for that matter, ketches
and yawls can achieve the same effect by just leaving their mizzen up
(perhaps with a reef or two). But since whatever you use will be left
up constantly while at anchor and exposed to a lot of ultraviolet radiation,
it’s a good idea to have a dedicated riding sail, and not subject your
storm jib or mizzen sail to all that abuse.

How
do you rig a riding sail? First, attach a pendant between the stern of
the boat (the top stern rail works well) and the tack of the sail, long
enough to keep the sail well clear over the cockpit. Then attach a halyard
to the head and hoist the sail aloft. Finally, rig a sheet from the clew
to a place on deck amidships, or – better, but more work – run a sheet
to each side of the deck or cabin house. You can leave the sail flying
free like this, but it will tend to slat a bit in high winds. So it’s
best to attach the luff of the sail to the backstay with a number of hanks.

Riding sails may not
be common, but any sail loft can make one up for you. Or you can contact
Sailrite, which markets a basic anchor riding sail kit with a 75-inch
leech, a 58-inch luff, and a 72-inch foot (15 square feet) designed for
boats over 20 feet. It costs between $68 and $73, depending upon the size
of the snaps needed to fit your backstay. This kit was just upgraded to
use Top Gun sailcloth, rather than Dacron. This makes the sail hold up
much longer.

Kent Sails designed
our current riding sail with a fiberglass rod running between the backstay
at the luff and the grommet at the clew. This rod does a nice job of stiffening
the sail, and keeps it quiet in high winds. But more than that, this unusual
design has the interesting feature of holding the clew out away from the
backstay, in much the same way a wishbone boom on a sailboard holds the
clew of the sail out from the mast. With the clew held out taut, you can
swing the sail around on the backstay to point aft, which not only gets
it out of the way of the cockpit, but has the advantage of putting the
sail’s center of effort even farther from the bow, making it even
more effective at keeping the boat steady.

If
you already have a riding sail with hanks on the luff and would like to
try this arrangement, it’s a simple matter to modify the sail to be able
to point aft. All it takes is a few feet of hollow aluminum rod, a short
piece of webbing, and a couple of sheet metal screws.

First lay out a line
between the luff and the clew, perpendicular to the luff, and mark where
the line meets the luff. Then buy a length of hollow aluminum rod that
is at least 6 inches longer than this line, and slightly smaller in outside
diameter than the clew grommet (so the rod will slide through the grommet).
Using your sail repair kit (you do have one aboard, don’t you?)
sew about 4 inches of 1-inch webbing to the side of the luff at the position
you marked, with enough slack to hold the rod. (The purpose of the webbing
is to keep the rod in position on the backstay.) Then cut about a half-inch-deep
slot into one end of the rod so the end fits over the backstay.

The final step needs
to be done with the sail hanked onto the backstay and hoisted taut. Slide
the slotted end of the rod through the clew grommet, through the luff
web loop, and over the backstay. Then pull the clew out taut, and mark
the point on the rod where it enters the clew grommet. Remove the rod
and mount a couple of sheet metal screws at that point on the rod, which
will keep the clew from sliding down the rod toward the backstay. Next,
cut the excess rod off about 4 inches beyond the screws.

When
you now place the slotted end of the rod through the web strap, then the
other end through the grommet up to the screws, and finally slide
the slot over the backstay, the clew should be held out nice and taut.
Finally, just rotate the whole sail aft, and add a sheet from the end
of the    rod to each corner of the stern rail. Using rolling
hitches for each sheet makes it easy to adjust the centering of the sail.
And that’s it – you’re done.

A
nice side effect of any riding sail is that it makes your boat easier
to find in a crowded anchorage, as there aren’t too many boats out there
with big white triangles at their sterns. (This has come in very handy
when returning by dinghy from a late evening ashore and trying to find
our boat by flashlight.) Our unusual aft-pointing rig is also very sociable,
in that we usually have at least one sailor in each anchorage stop by
to ask about it. Last summer we even had the skipper of a nearby Alberg
30 so intrigued that he spent an hour trying to construct a similar rig
using his storm jib and a telescoping awning pole. At one point when things
weren’t going too well and the pole fell to deck for the second or third
time (there was no webbing at the luff to hold the pole in place) he good-naturedly
called over, “Look what you started!”

Whether you choose
the traditional forward-sheeted arrangement, or the unusual aft-pointing
rig, I highly recommend you consider using a riding sail to steady your
boat at anchor. Leave the “horsing around” for on shore.

Steve Christensen
and his wife, Beth, sail their Ericson 38, Rag Doll, out of Saginaw Bay
on Lake Huron and spend each August cruising the North Channel . . . with
their riding sail.