Trekka Round the World: Book Review 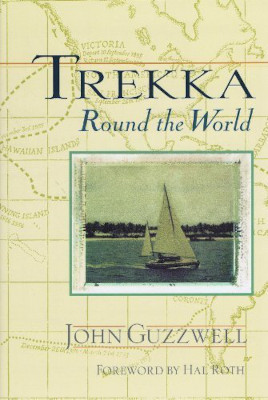 This audiobook should come with a warning: may be life altering! It is inspiring to “look over the shoulder” of a recent immigrant lad as he proceeds quietly and surely to make his dreams a reality. The adventures he relates and the word pictures he paints of places and people encountered during his voyages may awaken an urge in the readers to pursue their own dreams.

I was immediately engrossed in this tale. However, being constitutionally unable to sit for 9+ hours by the computer, and being among the last of my generation to navigate life without an iPod/MP3 player, I burned a set of the expanded files to CDs (nine of them) that I could listen to while driving. I soon found myself driving to distant chandleries, and making frequent trips to the marina for small boat projects (“life altering” comes in many forms).

John Guzzwell arrived in Victoria, Calif., a young man in his early 20s, with a small satchel of clothes and a box of woodworking tools, a love of the sea inherited from his father, and a dream to make a long voyage in a boat of his own. He quickly found work using his skills as a ‘joiner.’ With a profound but quiet sense of self-confidence, he set about his dream of a small voyaging boat. John corresponded with J. Laurent Giles, who agreed to design a suitable vessel. Next, John found a space for rent where he could begin construction of Trekka — a storeroom behind a fish and chips shop. He purchased wood with savings from his various day jobs and made surprisingly quick work of Trekka’s construction, completing her hull and deck in nine months.

John launched Trekka into the inner harbor of Victoria in August 1954. Her masts and rigging were in place the next spring so that John and Trekka could learn one another’s ways. On September 10, 1955, well down on her lines from the stores aboard, they headed out the Strait of Juan de Fuca en route to Hawaii. A diversion to San Francisco for minor repairs proved fortuitous. There, he met Miles and Beryl Smeeton and their daughter Clio, who were cruising aboard their wooden ketch, Tzu Hang. A strong friendship quickly developed. They agreed to sail in company to Hawaii, and then on to New Zealand, arriving in May 1956.

In New Zealand, a new plan developed. John had Trekka laid up so that he could sail with the Smeetons on the square-rigger route around Cape Horn. On February 14, 1957, while running before an awesome sea, about 1000 miles west of Chile, Tzu Hang pitchpoled. John quietly recounts their combined efforts to make Tzu Hang watertight again and construct a jury rig with sufficient sail to make landfall in Caronel, Chile.

Once reunited with Trekka back in New Zealand, John felt confident in proceeding on around the world. He and Trekka crossed their wake in the Hawaii Islands on July 27, 1959. His was the first circumnavigation by a Canadian, and for a while,Trekka was the smallest boat to circumnavigate.

This book is an acknowledged classic that has already inspired other cruisers who are now well-known for their own accomplishments. Hearing the tale told by the author makes this book an especially welcome addition to any library. John concludes with a final caution of sorts: “The sea has an enchantment that may captivate you and make you a bit of a misfit on land.”

Trekka Round the World by John Guzzwell, audiobook narrated by the author (Produced by Good Old Boat, 2007)