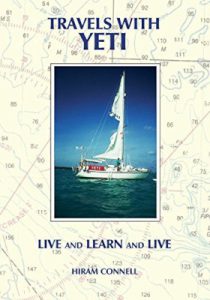 Here is the story of an enthusiastic sailing couple and their five-year wander down the Atlantic Coast and through the Caribbean to Venezuela and back. You get the complete story, starting from their very first dinghy sail to the final, sale of Yeti, the sailboat that entwined their lives over so many years. It would be a character-building read for those who have been tempted to do something similar; your heart will warm toward an author who spares us no details about the mistakes he makes along the way to becoming a seasoned cruiser. And there are some exciting descriptions of sailing in rough weather, including what it is like to have your mainsail split by high winds while in the middle of the ocean.

There are odd characters met on the beach, odd goings-on in strange boats in the middle of the night, the great (and miserable) food, and the frustrating encounters with local Caribbean police and customs officers. There are brief descriptions of islands and anchorages and lots of judgments about good ports-of-call plus some details about those a person might want to avoid. And while there was probably too much on dealing with engine problems, it was comforting to learn that other people also had these things happen to them at the worst possible time.

While the book is worthwhile, it sometimes can’t seem to make up its mind whether it wants to be a cruising guide or a memoir of a wonderful cruise of a lifetime. An author probably can’t do both in the same book, so it’s sometimes a bit short on both counts. The details about anchoring and navigation aren’t sufficient and there often is not enough about the people and their stories. One missing detail: while Hiram Connell’s wife, Helen, was an integral part of this adventure, I feel like I know almost nothing about her. Of course, he gives her heartfelt acknowledgments along the way but I wish he’d also given her a voice.

Other things could have been left out — perhaps half of the pictures and almost all of the editorial asides on the politics, the poverty and the graft in third-world countries. I suspect most readers know those facts already.

But there were some nice stories in the book: the spontaneous operatic concert in the Puerto Rico restaurant, the 25th wedding anniversary on some isolated island, the evening with Earl and the poetry and the waltzing. Yes, yes, author, give us more!