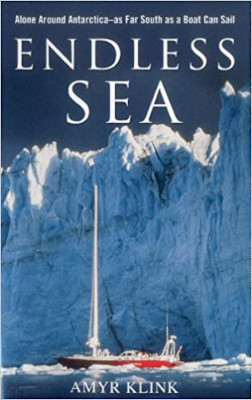 Isn’t it funny how good moods are so often the product of what we perceive internally when we accomplish simple objectives, not of what we actually see outside? Can this be true even when it’s freezing, a huge mountain of ice is floating off your bow, and 50-foot waves are hitting your boat from all sides?

Endless Sea by Brazilian sailor, author, and businessman Amyr Klink, tells the story of Amyr’s 1998-99 single handed circumnavigation of Antarctica. For five months and 18,000 miles, Amyr sailed below the Antarctic convergence in Paratii — the 50-foot aluminum boat he called his “big red truck” — dodging icebergs, weathering freezing storms, and enduring the worst the South Sea could throw at him.

As Amyr takes us along on this cold and lonely expedition, he shares with us his views on topics ranging from weather to geological formations to renaming places and streets after dead men. Such discourses, though not an integral part of the story, flow into it with such smoothness and offer such insight into his psyche that the book would be much less without them. In addition, the book includes many facts and interesting trivia about the early Antarctic explorers, great and small. This adds real depth to the book.

One of the most intriguing aspects in the book was Paratti’s Aerorig mast, an unstayed 80-foot carbon-fiber, 360-degree rotating mast in the shape of an inverted cross, supported only at the deck and keel. The 42-foot-single-piece boom is pierced by the mast — off-center, extending about 17 feet fore and 25 feet aft of the mast — and is raised 7 feet off the deck. This unique rig eliminated nearly all the lines and hardware normally cluttering up the deck of a sailboat, reducing them to one single controlling mainsheet. In Amyr’s words, “miles of lines and almost a ton of complicated hardware that had once cluttered the deck were now gone.”

Amyr spent “months of sea trials chasing squalls, making abrupt maneuvers, over-canvassing, and stressing the mast as much as possible.” He tells us that “While the twins [his toddler daughters] drank from their baby bottles on the same deck that had once been covered with a mess of lines, I made full circles under full sail, with never more than three or four fingers lightly touching the helm.” The Aerorig impressively surpassed these accomplishments during Amyr’s 18,000-mile circumnavigation.

Other than the 46-page land log — written by Amyr’s wife Marina — which I thought rather dull, as log books typically are, I found this book interesting. Just watch out for the icebergs! 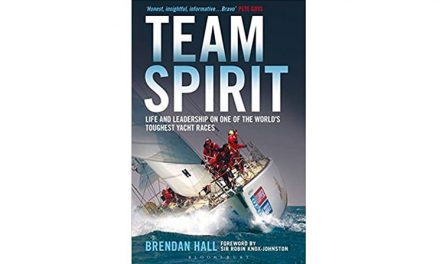