This summer the confluence of two things made a strong impression on me. The first was the opportunity to appreciate once again in its entirety The Wind in the Willows by Kenneth Grahame. The second was a lengthy delay in getting to our boat due to health issues.

Every boater, particularly each do-it-yourselfer, knows the Water Rat’s famous quote about messing about in boats. But Grahame, who grew up near the water, has much more to say about the joys of the boating lifestyle through his character, the Rat.

I enjoyed every word on an audiobook while working out at home in early summer this year as Jerry recovered from open-heart surgery and our boating season was postponed by two months. Blissfully unaware of what was to come, we had launched our C&C 30 in the Apostles in mid-May but were unable to return to her until mid-July due to follow-up medical checks, three-times-a-week cardiac rehab sessions, and weight-lifting restrictions to protect Jerry’s mending breastbone. It was a frustrating time for both of us.

Meanwhile, the Rat spoke to me. I thought it worthwhile to quote the whole scene for everyone to savor. Whether you’ve had a great sailing season or a shortened one for whatever reason, the Rat will remind you of the joys of life by and on the water. The whole scene is below with a few paragraphs I deleted because they did not seem necessary in this retelling.

I must also mention another chapter in the book in which Kenneth Grahame speaks once more with feeling to all sailors. This is Chapter 9, “Wayfarers All,” in which the Water Rat meets a wandering rat, the sort who ships aboard seagoing vessels. This fellow waxes absolutely eloquent about the voyaging life. He notes that he is a coastal cruiser rather than a long-distance passagemaker. He prefers the waterfront destinations of the port cities to the shipboard life during voyages. This chapter is also delightful.

The rest of our story: Jerry mended. We went sailing. Just getting back to the boat was as healing as the Rat would have you believe. There really is nothing — absolutely nothing — half so much worth doing as simply getting back on the boat!

Excerpts from Chapter 1, “The River Bank,” The Wind in the Willows by Kenneth Grahame.

He [the Mole] thought his happiness was complete when, as he meandered aimlessly along, suddenly he stood by the edge of a full-fed river. Never in his life had he seen a river before–this sleek, sinuous, full-bodied animal, chasing and chuckling, gripping things with a gurgle and leaving them with a laugh, to fling itself on fresh playmates that shook themselves free, and were caught and held again. All was a-shake and a-shiver — glints and gleams and sparkles, rustle and swirl, chatter and bubble. The Mole was bewitched, entranced, fascinated. By the side of the river he trotted as one trots, when very small, by the side of a man who holds one spell-bound by exciting stories; and when tired at last, he sat on the bank, while the river still chattered on to him, a babbling procession of the best stories in the world, sent from the heart of the earth to be told at last to the insatiable sea. As he sat on the grass and looked across the river, a dark hole in the bank opposite, just above the water’s edge, caught his eye, and dreamily he fell to considering what a nice snug dwelling-place it would make for an animal with few wants and fond of a bijou riverside residence, above flood level and remote from noise and dust.

‘Would you like to come over?’ enquired the Rat presently.

‘Oh, its all very well to TALK,’ said the Mole, rather pettishly, he being new to a river and riverside life and its ways.

The Rat said nothing, but stooped and unfastened a rope and hauled on it; then lightly stepped into a little boat which the Mole had not observed. It was painted blue outside and white within, and was just the size for two animals; and the Mole’s whole heart went out to it at once, even though he did not yet fully understand its uses.

The Rat sculled smartly across and made fast. Then he held up his forepaw as the Mole stepped gingerly down. ‘Lean on that!’ he said. ‘Now then, step lively!’ and the Mole to his surprise and rapture found himself actually seated in the stern of a real boat.

‘This has been a wonderful day!’ said he, as the Rat shoved off and took to the sculls again. ‘Do you know, I’ve never been in a boat before in all my life.’

‘Is it so nice as all that?’ asked the Mole shyly, though he was quite prepared to believe it as he leant back in his seat and surveyed the cushions, the oars, the rowlocks, and all the fascinating fittings, and felt the boat sway lightly under him.

‘Nice? It’s the ONLY thing,’ said the Water Rat solemnly, as he leant forward for his stroke. ‘Believe me, my young friend, there is NOTHING — absolute nothing — half so much worth doing as simply messing about in boats. Simply messing,’ he went on dreamily: ‘messing — about — in — boats; messing — —’

It was too late. The boat struck the bank full tilt. The dreamer, the joyous oarsman, lay on his back at the bottom of the boat, his heels in the air.

‘— about in boats — or WITH boats,’ the Rat went on composedly, picking himself up with a pleasant laugh. ‘In or out of ‘em, it doesn’t matter. Nothing seems really to matter, that’s the charm of it. Whether you get away, or whether you don’t; whether you arrive at your destination or whether you reach somewhere else, or whether you never get anywhere at all, you’re always busy, and you never do anything in particular; and when you’ve done it there’s always something else to do, and you can do it if you like, but you’d much better not. Look here! If you’ve really nothing else on hand this morning, supposing we drop down the river together, and have a long day of it?’

The Mole waggled his toes from sheer happiness, spread his chest with a sigh of full contentment, and leaned back blissfully into the soft cushions. ‘WHAT a day I’m having!’ he said. ‘Let us start at once!’

The Mole never heard a word he was saying. Absorbed in the new life he was entering upon, intoxicated with the sparkle, the ripple, the scents and the sounds and the sunlight, he trailed a paw in the water and dreamed long waking dreams. The Water Rat, like the good little fellow he was, sculled steadily on and forebore to disturb him.

‘I beg your pardon,’ said the Mole, pulling himself together with an effort. ‘You must think me very rude; but all this is so new to me. So — this — is — a — River!’

‘THE River,’ corrected the Rat.

‘And you really live by the river? What a jolly life!’

‘By it and with it and on it and in it,’ said the Rat. ‘It’s brother and sister to me, and aunts, and company, and food and drink, and (naturally) washing. It’s my world, and I don’t want any other. What it hasn’t got is not worth having, and what it doesn’t know is not worth knowing. Lord! the times we’ve had together! Whether in winter or summer, spring or autumn, it’s always got its fun and its excitements. . . .

Karen Larson is the co-founder and former editor of Good Old Boat who now spends some of her time pondering literature and planning sailing trips aboard either of her two boats. 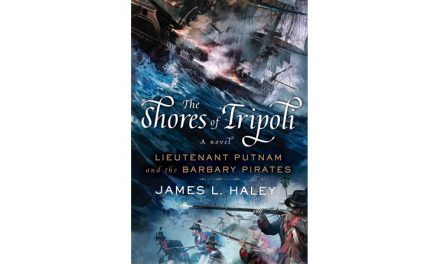