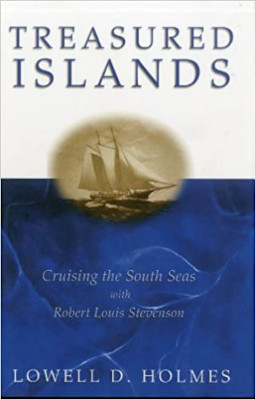 The wise owl, Robert Louis Stevenson, and the pussycat, his wife (manipulative and ever-seasick Fanny), took some money — he had a bundle — and sailed the pea-green Pacific amidst gilt splendor and crimson plush on the black-hulled schooner, Casco. The yacht’s 340-pound designer, owner, and physician said the trip helped him lose 60 pounds, a dubious benefit for the sickly, tall, 98-pound author of Treasure Island and A Child’s Garden of Verses.

Casco’s captain was arrogant Otis, suspected of murdering his own uncle to obtain both the uncle’s widow and a share of his boat. Otis ridiculed Robert Lewis Stevenson (he preferred to be known as RLS) as a lubberly ignoramus. Also aboard: Fanny’s son, Lloyd, a lifetime fop destined to die a millionaire; RLS’s mom, Maggie, the only voyager immune to seasickness; the family’s sexy French maid, Valentine; their Chinese cook who claimed to be Japanese and called himself Antone; and four argumentative crewmembers, all unfit to navigate.

Son and grandson of Scottish engineers and lighthouse keepers, RLS was cursed from infancy with the lung disease that killed him. He found relief in the Pacific’s balmy island climate. He spent years wandering, established an enormous mansion, and had to work hard to pay for his lifestyle; he wrote 700,000 words in his last four years.

Fanny was a lifelong artist; RLS was an insatiable amateur anthropologist with professional yearnings. His notes detail dress, behavior, social mores, and history. He exchanges gifts, studies indigenous pride, admires the cultures, shoots the surf, endures gales, and searches for new harbors. And as he coughs his life away, he writes gloriously.

The biography’s author, a seasoned sailor himself, who has degrees in literature and anthropology, is a Stevensonian expert who has visited Samoa four times. His fascinating book is an authoritative interlude with an immortal author, his voyages, thoughts, and relationships, the islands he loved, and the three ships that shaped his life. Conveniently, it’s also a compact volume that fits any boat shelf.