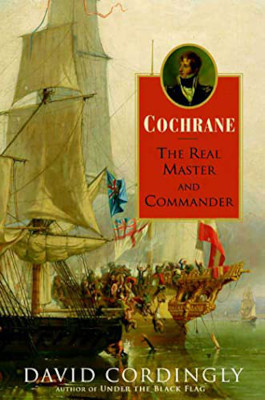 It’s no news to serious readers of Patrick O’Brian’s Jack Aubrey series that their hero’s character is based on the real life naval career and exploits of the late 18th and early 19th century British frigate commander, Thomas Cochrane. What may surprise those readers, however, is the extent of the similarities between the historical figure and the fictional character: a captain loved and respected by his crews; a captain well-known for his brilliant tactics and seamanship; a close friend who serves as his ship’s surgeon; a man whose life seems almost charmed at sea but prone to controversy and ill-fated efforts on land, culminating in a ruinous stock market scandal. Sound familiar, JA readers?

Other authors, including C.S. Forester for his Horatio Hornblower series, have also drawn on Cochrane’s naval experiences. But author David Cordingly’s purpose for writing this book is not to pay homage to Cochrane’s literary legacy. Instead, Cordingly concentrates on his subject’s historical legacy that, according to the author, has not been fully recognized or appreciated by British naval historians.

The author tells the story of an ambitious man who was born into Scottish nobility and entered the British navy relatively late in life (at age 17) because the family fortune had been squandered by his father. If the young Lord Cochrane were to become a wealthy man, he would need to find a way to make his own fortune. At the same time, war with France was imminent. And serving in the British navy in time of war offered excellent prospects for quick promotion and prize money. But Cochrane turns out to be more than a resourceful and zealous Napoleonic-war era British naval captain. He is a man motivated by money, yet highly principled, and driven to fight for his honor, reputation, and place in history.

Cochrane was born a bit ahead of his time and suffered for it. He was elected to the British Parliament, where he fought for social reform and made many political enemies who considered him and his political allies as radicals and firebrands for revolution. Cochrane also made enemies of his superiors in the Admiralty by using his seat in Parliament to publicly criticize and condemn the navy’s traditions of flogging, press gangs, and overall poor treatment of its sailors. Not until years after he had left Parliament was Britain and its navy ready to enact the social and naval reforms he championed.

Cordingly assists the reader with an excellent glossary of 18th century naval terminology. Maps, battle diagrams and a cutaway line drawing with named parts of a 38-gun frigate (one of Cochrane’s commands) are also great aids to the reader. The book includes beautiful color plate portraits and paintings of the period, all relevant to Cochrane’s life at sea and on land. This book is well-researched and dense with background, not only about his subject but also about the political, social and naval life in 18th and 19th century Britain. Cordingly’s sources include the Cochrane family archives, transcripts of courts-martial, civil court lawsuits, ships’ logs and Cochrane’s controversial autobiography, The Autobiography of a Seaman.

This book certainly stands on its own as an excellent biography for historians or readers who are interested in naval history. If you fall into the latter category, and are also a Jack Aubrey fan, you will enjoy the best of both worlds.