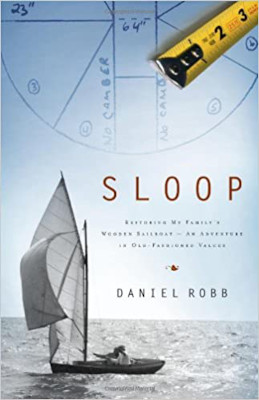 Daniel Robb is a carpenter, actor, teacher, an expert on the Transcendentalists, a sailor, and shipwright. He is also a wonderfully skilled writer, all of which makes his book, Sloop, a great read.

Daphie is a Herreshoff 12-½, built in 1939, which had been sailed by generations of Robbs in Buzzard’s Bay off Cape Cod. He came across her, sitting abandoned on a trailer in his cousin’s yard. Needing something to write about, he towed her back to his place and spent 16 months restoring her — removing the bottommost planks, replacing the frames, refastening, scarfing out the transom, painting, varnishing the spars, and finally sailing her around the islands that stretch southwest from Woods Hole.

This is not a how-to-do-it book, but one will learn a lot about restoring a 60-year-old wooden boat. Rather, the restoration is how Robb tells the story of his family and the people who live on the heel end of Cape Cod. He does not just use a screwdriver to reassemble the bronze fittings on the sail — he uses his grandfather’s old wooden-handled screwdriver. (As a man with a basement full of tools from four male antecedents, I understand.) He doesn’t tell us what brands of Dacron or epoxy he used to replace the canvas on his foredeck, but we learn about Art Burgess and Dave Ash, men who have been building and restoring wooden boats for 50 years and told Robb how to go about it. He describes the steam box he built to make his new frames flexible, but that’s not as interesting as the discussions with the locals describing all the different kinds of boxes they have built. There’s the lady at the church thrift store who will not sell him a teapot to use as a steam generator, and the counter at the chandlery in New Bedford, where a simple question about copper rivets becomes a boatbuilder’s support group meeting.

This memoir could have been clumsy, but in Robb’s hands it is not. It is as smooth as the water of Hadley’s Harbor — a funny, interesting, and educational book.