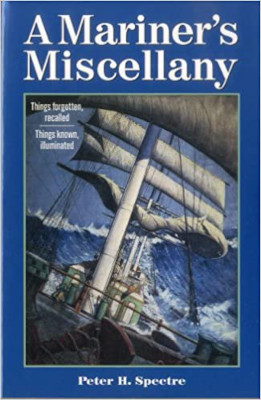 The romance of the sea is a strange thing. It manages to cling to some extent to every thing that floats. – C. Fox Smith

On a rainy spring night, I received a package from Good Old Boat. I figured it was the book I had promised to review. Opening the package, I saw on the book cover an illustration of a three-masted sailing ship, making her ways in a heavy sea. I smiled, ready to spend time on a ship, with salty characters, and an intricate plot . . . the perfect way to spend a rainy night.

Instead, I was greeted with chapter after chapter of boating and marine-related trivia, facts, quotes, poems, and chronologies. Where was my engaging novel? Surprised and intrigued, I sat down and read the first few chapters. Here, I realized, was the answer to all those questions you have as you learn about sailing. Questions like: Where in the world did the term “starboard” come from? Or, if a wind is blowing from the north toward the south, do you call it a north wind or a south wind?

A Mariner’s Miscellany is a compilation of all things nautical. Do you want to know the how and the why of signal salutes during the age of sail or what L. Francis Herreshoff thought were the four most important qualifications needed to undertake long-distance voyaging? Do you know the difference between natural fiber and modern synthetic rope? This book will tell you. You can even find a recipe for making grog. These and thousands of other facts — practical, informative, or just interesting — can be found in this book.

Author Peter Spectre is well-qualified to undertake such a massive undertaking. He’s editor of Maine Boats & Harbors magazine and former editor of WoodenBoat magazine. The Mariner’s Book of Days, A Passage in Time, A Goodly Ship, and several other marine-related books are among his literary credits.

This is not a book you sit down and read in one setting. Rather, it is a resource you consult when you want to find the why or where an expression came from or to find out what other sailors thought when they encountered a similar problem or situation. A Mariner’s Miscellany will also prove useful for writers; it is an excellent source of facts, quotes, and their historical origins

I have a tough time reading poems so the abundance of poetic passages caused tough sledding for me at times. The absence of a detailed index was another surprise. With an index I would be able to look up the subject being argued, cite the reference, and end those crazy arguments that sailors so often have when they get together. In the hands of those of us with sea lawyers as friends, this compendium of knowledge could be the lawyers’ undoing.

A Mariner’s Miscellany is a delightful and interesting book for those who value the intellectual side of boating. It deserves a spot on the dedicated mariner’s bookshelf.