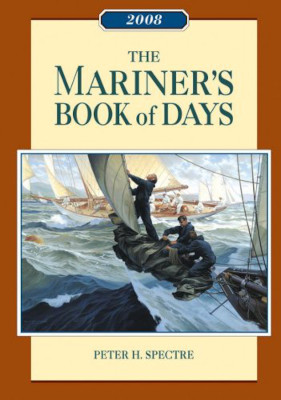 Bookstores’ shelves start filling up with calendars and daybooks this time of year. For sailors, there are many to choose from, including ones featuring gorgeous photos of vintage ships or exotic shores and waters. But Peter H. Spectre offers the sailor something different in his The Mariner’s Book of Days — sheer entertainment and diversion. The right-hand page has the days of the week with a nautical event noted for each day. The left page has old engravings, sea shanty verses, log entries or whatever Peter has come up with. Sometimes the week has a theme. May 8 notes that on that date in 1701 William Kidd was put on trial for piracy. The left-hand page has an engraving of a fearsome pirate with two pistols and a mean eye, a shanty about Kidd, laws from a pirate ship, a quote from Mark Twain about pirates and, just for the heck of it, a log entry from Joshua Slocum’s circumnavigation.

Each week offers something new. The reader can browse and see what naval disaster happened on any day or view glossaries of terms. The week of September 29 has a seaman’s list of a week’s worth of meals aboard a 19th century clipper ship. There follows a glossary for terms like duff, scouse, mush, Cape Cod turkey, and other mysteries of the seaman’s table. (My favorite: “Spithead pheasant (aka, one-eyed steak) kipper.”)

The first week of December has the lyrics to the U.S. Maritime Service along with a quote from Emerson, “The wonder is always new that any sane man can be a sailor.” Conrad is quoted for a week devoted to anchors and rodes. “From first to last, the seaman’s thoughts are very much concerned with his anchors.”

Each week usually includes a passage from a ship’s log or a sailor’s account. One week, a barely literate ship’s butcher notes the cook being flogged twice on the same day “for being saucy.” Another week offers a sailor recounting how a first mate was laughed at when he mistook “the thin spout of the ‘Killer’ for the bush dense vapour emitted by Sperm-Whale!”

The beautiful archaic language from poets and plain sailors is one of the joys of the book. There are familiar writers such as Kipling, Whitman, Crane, and Shakespeare, but many of the authors are unknown. Peter has mined deep in nautical libraries and brought back some strange and wonderful gems for the reader’s delight. 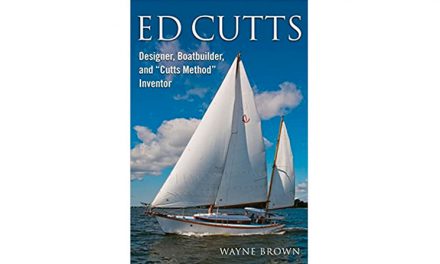