A Matter of Honor: Book Review 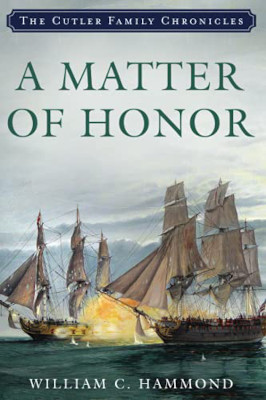 Richard Cutler is everybody’s hero. Women readers will love him. Men will respect his strong character and code of ethics. It’s almost a shame that he’s a figment of our imaginations and that of first-time novelist William Hammond. Bill’s book, A Matter of Honor, the first of a series, introduces Richard Cutler as a young man from Massachusetts during the early years of the American Revolutionary War.

As a yet untested young man, Richard is recruited for the Continental Navy by John Paul Jones and offers us a well-researched look at this historical figure and several others in the events that unfold. Although he is a fictional character, Richard is a participant in or witness to several famous naval battles and other historical events.

Perhaps because he is a fictional character, it is easier to construe plausible reasons for having Richard in the room when Benjamin Franklin is negotiating with the French, and at the Battle of Yorktown fighting at the side of Alexander Hamilton. Perhaps no real sailor of the 1770s got around as easily as Richard Cutler. But then Richard Cutler had “connections” that make him a very interesting individual indeed. We are fortunate that the U.S. actually won the Revolutionary War without Richard’s participation.

Author Bill Hammond takes a good long look at the international events swirling around this nascent country’s fight for independence. He makes it clear that it is practically a miracle that the leaders of the U.S. won our independence, dealing as they were with a frightful lack of money, unity, military training, and equipment, not to mention a severe lack of food, medical care, and clothing for our soldiers and sailors. This book reminds us that it is a wonder that we are able to fly the Stars and Stripes today. This achievement was earned in spite of the odds against all the true Richard Cutlers of the 1770s.

With an improved appreciation of the events surrounding the Revolutionary War, and a strong personal interest in the future of Richard Cutler, I look forward to further books in the series by Bill. A Matter of Honor is not all war and history. There is romance, sex and relationships, complicated family responsibilities, and ties involving a family that spans both sides of the Atlantic Ocean and both sides of the war. There’s wind of the impending revolution in France and the unrest in the Caribbean, where the real financial interests of the time were located.

This is a story well told on many fronts. Sailors and historians will appreciate the naval scenes and battles. Every reader will appreciate the background and fresh insight on the events of the American Revolutionary War told from several points of view. Fans of historical fiction will want to begin following the adventures of Richard Cutler now and as this series unfolds.