United States Coast Guard Petty Officer 3rd Class Corinne Zilnicki captured this shot of her colleague, Seaman Dallas Harvey, securing a crane hook to a buoy on the James River in Newport News, Virginia. Harvey is crew aboard the Cutter Frank Drew, a 175-foot-long coastal buoy tender used to perform maintenance on aids to navigation and to hoist extraneous buoys from the water. Send michael_r@goodoldboat.com your favorite hi-res photo of an aid to navigation, be creative. If we use your pic in Good Old Boat magazine, we’ll send you a Good Old Boat cap or shirt.

DON’T BE THE BOAT THAT NEVER CASTS OFF…

Please tell David (“There Ought to be a Law,” The Dogwatch, April 2018) that the refit will never be completed and he should just leave!

I just read all the reader mail in April’s The Dogwatch, including mine, about radar reflectors. It was interesting to see how strongly the readership of Good Old Boat and Practical Sailor seem to overlap. But, the discussion also reminded me of an experience from many years ago.

About 10 miles offshore in a fog that’d reduced visibility to around half a mile, I was carefully using my compass to work my way from buoy to buoy down the Southern California coast. Suddenly, I saw a 50-plus-foot powerboat bearing down on me at high speed.

Fewer than 50 feet from impact, he swerved sharply and pulled up parallel. A guy on the bridge shouted, “Hey, I’m lost. Do you know where we are?”

One more bit of evidence for the one point all the writers seemed to agree upon: Don’t count on the other guy.

NO EXCUSE FOR THIS CRAP

I have a response to David Lochner’s recent story (“There Ought to be a Law,” The Dogwatch, April 2018). The propeller shaft stuffing box on my Cape Dory 28 is a grave and dangerous example of an inaccessible feature. The designers must have assumed this part would be accessible through the cockpit lazarettes, but it is not possible to get workable access in this way (it would be something like crawling upside down into a manhole with a heavy wrench in your teeth). I am considering a hatch in the cockpit sole, a controversial solution that some consider unwise.

I have seen several rather idiotic examples of inaccessible mechanical components on boats. As a teenager, I worked at a boatyard that sold a line of fast fiberglass runabouts; when we needed to pull an engine on one of these, the factory advised us to cut the afterdeck away, as they had installed the engines and then built fiberglass decks over them. Last year, I tried to replace some tired bow seats from an open-bow runabout. I discovered the seats had been bolted to the deck assembly before it was joined to the hull, so the fasteners could only be reached by cutting holes in the hull.

Too often, sailboat makers sacrifice function for finish. There is no excuse for this crap. Every part of a cruising sailboat should have workable access. 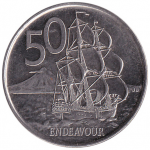 Last month I put it to the readers about the tradition of placing a coin beneath a stepped mast. I wanted to know if people were still indulging this tradition and why. Turns out Good Old Boat sailors are indeed coin-placers and there are some compelling theories about why sailors started doing this, most of them practical at one time. –Eds. 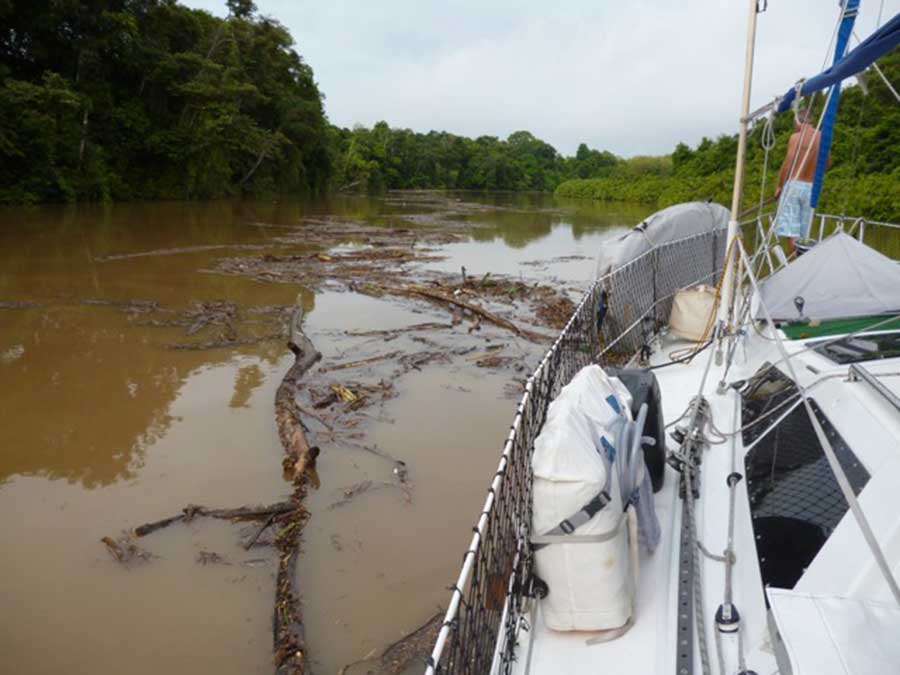 Eyoni driving up the Darian in Panama

I have a Kiwi $.50 coin under my mast, stuck in a blob of polyurethane. It depicts Cook’s Endeavor under full sail with Mt. Cook in the background. Seemed auspicious so I saved it for the occasion last time I unstepped the mast. I can’t say it’s helped, but it sure did not hurt and I’ve tested the theory more than some…!

Placing a copper coin under a wooden mast works as lighting protection, or so some crusty old sailor once told me.

Here is my theory: Back when masts and mast steps were made of wood (the good old days), the mast and step were generally damp, at least most of the time. The end grain of the mast absorbs water and wicks it upward by capillary action (even if it’s painted or epoxied, as no coating is 100% waterproof).

The damp wood of mast and step were subject to becoming a prime habitat for rot fungi, which would severely impair the durability and integrity of the mast.

But by placing a silver or copper coin under the heel of the mast, it seems to me that the water (especially salt water) would corrode the coin, producing soluble salts of silver or copper, both of which are toxic to fungi (ever use Cuprinol?). These salts would be drawn up into the wood, inhibiting the growth of fungi wherever the wood is moist.

It seems that many superstitions (also known as religions) have some basis in fact. I suggest this is one of those.

If this theory is true, a gold coin would not work, because gold is chemically inactive. I don’t know if the alloys in modern US coins would either. Lead might. Consult a table of electronegativities to determine what kind of a coin to use under an aluminum mast. Perhaps zinc?

I expect to take delivery soon on a new-to-me good old 1945 Abaco dinghy; rest assured I will be putting a coin (a 1945 British penny, if I can find one) under the mast.

Oh! And I just picked up the mail: it contained the new Chesapeake Log (the journal of Chesapeake Bay Maritime Museum). I opened it to a random page (13, speaking of superstitions) and saw a photo of an 1889 silver dollar (oystering was good business then) found embedded in the foremast of CBMM’s 1889 nine-log bugeye Edna E. Lockwood, currently being restored.

Coincidentally, I had just come from my volunteer stint in the CBMM shipyard, where I spent an hour tidying up under Edna, collecting scraps to fire the steam box. It has been an education seeing the progress on this magnificent project from week to week for the last couple of years. As good old boats go, they don’t get much gooder or older. To the best of my knowledge, Edna is the second oldest (ahem) boat on the Eastern Shore.

Send your readers to CBMM to contemplate Edna. They will gain new courage and inspiration to pursue those formerly daunting restoration projects.

From wooden boat owners I learned that the purpose of a coin at the base of a wooden mast (a big copper coin is preferred) is to leach out poisonous metals into the surrounding area to keep the mast from rotting at the step, if it gets wet. There’s probably an old superstition, besides, for doing this, but the rot intervention makes some sense and most of these people do it.

When I un-stepped the aluminum mast on my English-built Mistral, I found a British coin. Naturally, after the work was over, I put it back. Rot or no rot, no need to tempt fate! 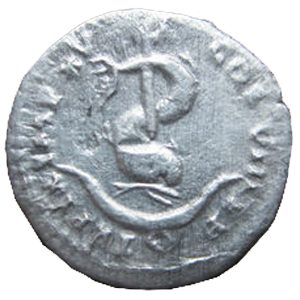 I first learned about the tradition from John Vigor’s blog. I’d used John’s re-naming ceremony when I changed the name of my 1984 Seafarer 30 from Airborne to Galefilero, before sailing her some 1,200 nautical miles from Boston to Holyrood in Newfoundland. The voyage was without major incident, so I figured the luck was pretty good. Nevertheless, I liked the idea of the lucky coin. After a little research I discovered the “anchor and dolphin” coin, a denarius minted under the emperor Titus between 79 and 81 AD. It is also associated with the motto “Festina Lente” or “Make haste slowly.” You can’t have a more apt motto than that on a sailboat.

The coin is silver and about the size of a dime. On my boat it is in a small plastic case affixed to the top of the compression post (under the mast). A photo of the coin is attached.

As I understand it, the coin was copper and placed under a wooden mast to help prevent rot in the base from fresh water that would find its way down there through a leaking mast boot. The theory being the copper would corrode and leach copper sulfate as a preservative.

And yes, I did place copper coins under the masts of the wood composite gaff rigged schooner Ashanti that I built. (The new owners created an impressive site at sailscape.net.)

I can’t remember the source, except that it was an early 20th Century book on boat building; the practice was to put a copper coin under the wooden mast step to inhibit rot — another of those traditional good ideas!

I’ll admit that I never put a coin under my mast step. The only way one would its way there is if it fell out of my pocket and rolled in there while I was crawling around on the cabin floor looking for whatever rolled off the cabin table.

On my 1961 Seafarer Polaris, we’ve had a coin under the mast since we acquired her in 1968. My Dad was more familiar with seafaring tradition and he pulled out a penny for the purpose. I did replace it with a 1961 penny a few years later.

The boat has added inside ballast. At one point I removed it to see if it would enhance performance. In doing so, I discovered a 1961 penny captured in the bottom of one of the lead pigs. I’m not quite sure what the coin-in-ballast theory is.

We were intrigued to read about those sailors who put a coin under their mast. We launched our ketch, Soleares, in Maryborough Queensland in 1999. We had some dear friends on their ketch, Pilar, visiting Australia from the USA and before they left, Diane gave me a Solomons Island coin for the exact purpose of putting it under the mast, as they were unable to be there to do it themselves. The coin has been there for 19 years and I feel they’ve been aboard with us the whole time! Sadly, Bill passed away but the friendship with Diane is stronger than ever!

Like you, we always felt that we weren’t superstitious, but then maybe we are?!

I used to receive a ceremonial silver dollar coin at work every time we filed a patent. So the first time we stepped the mast on our 1989 Ericson 38 Rag Doll, it seemed only natural to glue one to the mast step with some silicone, just in case the gods were watching. Even though we pulled the rig every fall that coin was still under the mast when we sold the boat some 12 years later. Must have worked, we never sank the boat or ran aground.

I wonder if the new owner has found it yet? (And whether he kept it there!)

Yes, I have a dime that has been under my mast since Mystique was launched in 1986, in Scituate, Massachusetts. Why? I do not know, but I knew it had to be. I made sure it was there every spring. Also, one year while re-rigging her, an extra old cotter pin wound up on deck, so I threw it under the anchor and it stayed there until hurricane Bob in 1991. My sailboat was one of just five that survived in Onset Bay, Massachusetts, totally intact. So, I went and got another old cotter pin and put it under the anchor, and it is still there to this day. In fact, we anchored to watch the Melbourne, Florida airshow two weekends ago, yup, the pin is there. Again, why? Good karma! 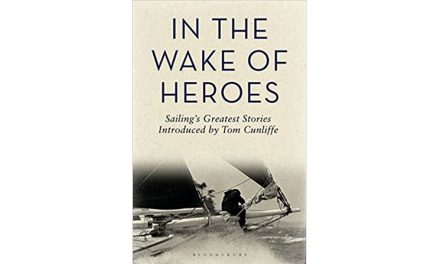