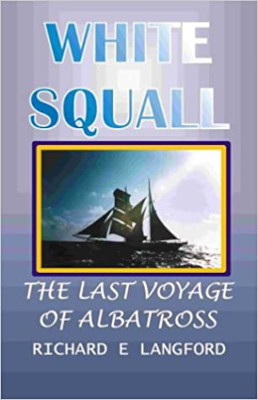 Not until a year ago did I see the manuscript, yellowed and frayed, that had been forgotten in Dick Langford’s office for 30 years. I cried when I read it then and cried again recently when I turned the last page of the finished book, White Squall, Last Voyage of Albatross. Some readers will remember the sinking of the school ship with the loss of four students and two adults in the early 1960s. The movie White Squall brought the story to today’s audiences. Now Dick Langford, who was the English teacher on board the brigantine, chronicles the real voyage — not the Hollywood version.

Typical of books published by Bristol Fashion, this one is plain-jane, with black and white photos that could be clearer and spiral binding that is practical but not pretty. Covers are tough, acid free, mildew resistant, archival quality paper for a long life on service at sea. The production could be more slick, but the content succeeds nevertheless.

As the voyage proceeds, you get to know the kids and crew and care about them. You join them in their hijinks and great discoveries. You’ll feel the awe of starry nights, sun-toasted shores, and days under sail. The book has humor, sweetness, and great poignancy because you know from the start that lives and the ship will be lost in the end. Dick’s own story of being dragged down with the ship and escaping only at the last second is chilling, and his numbed grief at the loss of life is achingly credible.

I admit to special prejudice because Dick Langford has been a close friend for 20 years. Years ago, he showed my husband and me brilliant color slides he took during the voyage. They survived because they had been shipped home before the sinking. Even then we didn’t know he had written a book. Sadly, too few of the photos are used in the book, and they are converted to black and white, but the originals are going to Mystic Seaport for posterity.

This is a compelling armchair travel yarn that will resonate with nostalgia buffs, anyone who has cruised the Caribbean and Galapagos, and all those who love the sea.