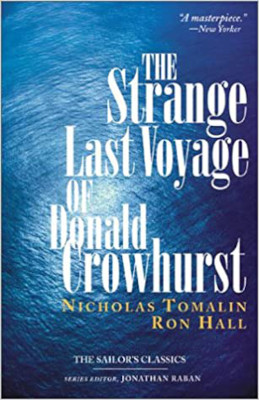 This is a chronological story of the life of Donald Crowhurst. The authors give insights into the psychological growth followed by the decay of the man into lunacy. Donald grew up in a time of heroes and felt he was made of heroic fabric. He was a boy and then a man who needed to be in the center of activity, an instigator of ideas and adventures, flitting from idea to idea. His follow-up ability was lacking, however; the usual result being eventual failure, be it in the military, commercial enterprises, or his round-the-world race.

When Sir Francis Chichester returned from his round-the-world voyage, Donald was taken by the idea of his own triumphant trip. He pooh-poohed Chichester’s labors thinking he could do much better with the same boat, Gipsy Moth. Many different ploys were attempted to gain the use of the boat, but Chichester rebuffed all.

The Times newspaper came up with the idea of a singlehanded race around the world, and Donald decided to enter. He tried many tactics to gain sponsorship and acceptance into the race. Finally, he talked a business partner into backing him and found a shipyard that could build a trimaran to his specifications. At that time, trimarans were a new untried type, and much doubt was cast upon his selection. He came up with a novel “computer-assisted” stability device that was far ahead of its time.

The building of the boat was a last-minute affair with several untried modifications added during construction. When it was finally launched, the boat had poor windward performance. By the time he sailed to his starting point, he had only 16 days left to complete preparations. It was a frantic time, but Donald seemed to be only half-heartedly preparing for the journey of a lifetime. Many important items were left to chance, with the result that most were left behind.

Doubts were building in his head like cumulus clouds. Several times he tried to get his wife or business partner to tell him to forgo or postpone the race. He desperately wanted someone to take responsibility for his lack of preparedness. Shortly after the start of the race, his need for acceptance was such that he started sending false daily mileages. Eventually, his false position was many hundreds of miles ahead of his actual position. During that time, he started to reason with himself about the possibility of staying out of sight in the South Atlantic Ocean until it was time to start back for England.

He stayed out of radio contact for most of the time, blaming a leaking hatch that was modified for generator access. During this time in the South Atlantic, Donald started losing his grasp on reality as we see it, and started seeing his own reality, derived from reading Einstein’s Relativity and turning things into a mathematical realm. Finally, on the homeward leg, the seriousness of his situation apparently overwhelmed him, and he carefully laid out his logbooks and then stepped overboard. The boat was found adrift several days later. It was upon examination of the logs that the twisted journey through the seas and through his mind was uncovered.

This book is one that should be required reading for psychology classes. It shows the downward spiral into lunacy like a downwind reach with brief puffs of logic.