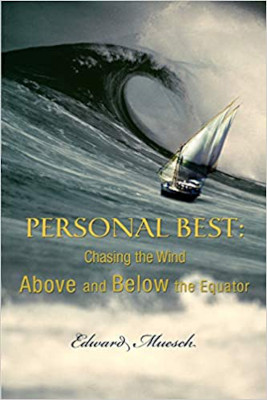 Ed and Helen Muesch have left a wide wake on the sea of experience. They have lived as farm workers in a commune, raising crops and animals. Later they joined the rat race of corporate America. Then, chasing a retirement dream, they sold their home and most of their belongings and went cruising.

While on that cruise they happened to be in Thailand on the beach when the tsunami of December 2004 struck the area. Clinging together, they were swept across the island and out to sea. With that resumé, perhaps it’s time for them to settle down. But that’s not a likely next chapter.

Personal Best: Chasing the Wind Above and Below the Equator is Ed Muesch’s book about their world cruising adventures and the tragedy and trauma of the tsunami. The book chronicles their discovery of sailing and the events that led to their cruising lifestyle. They sold their home, bought a 1990 Hans Christian 43 ketch, named her Tahlequah, and set out to see the world on the West Marine 1500 Rally in November 2001.

Ed’s book may never have been published if he and Helen had not been halfway around the world in the wrong place at the wrong time three years later. The book is written simply, in journal fashion, chronicling the Mueschs’ adventures abroad for curious friends and family members.

Perhaps because it was self-published, it retains that journal style in which it was initially created and, unfortunately, ignores spelling and grammatical errors. Still, it communicates to all who are willing to overlook those faults. It tells of one couple’s voyage by sea and of the big life-changing event that shaped the lives of Ed and Helen and so many others.

This book is available through http://www.virtualbookworm.com.

Personal Best: Chasing the Wind Above and Below the Equator by Edward Muesch (Virtualbookworm.com Publishing, 2006; 286 pages)

Trekka Round the World: Book Review