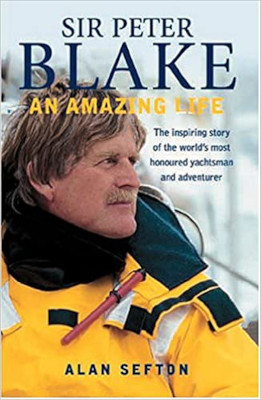 If you want to learn about Sir Peter Blake, who he was, what he was like, why people followed him, or anything else about what made this driven man tick, this is not the book for you. If you want to learn about New Zealand’s rise to prominence in the world of competitive bluewater sailing, how a sailing syndicate is formed and works, and other “inside information” about the international racing world, this is the book for you.

Alan Sefton, a journalist and long-time associate and business partner of Peter Blake, provides a detailed history of Peter’s sailing career, and with it the rise of New Zealand to international yacht racing leadership. He describes in intimate detail — sometimes almost hour by hour — just about every race in which Peter took part, from the 1974 Cape Town-Rio de Janeiro race in which he served as a young watch leader to his final competitive sailing venture as syndicate head of Team New Zealand in the 2000 successful defense of the America’s Cup. The details include how crew is selected, funds are raised, designers are chosen, and syndicates are formed. However, Peter Blake never really comes alive in this book. He is always there on the boat, in the syndicate boardroom, at the designer’s office, but as a cardboard cutout, not a rounded person. The closest that Alan comes to digging below the surface is in the epilogue where he touches on Peter as a person through the reminiscences of those who knew him at various stages of his life. These occur as interviews following Peter’s tragic death at the hands of bandits in the Amazon.

While this book does not, in my opinion, succeed as a biography, it is excellent as a history of the rise to prominence of New Zealand as a powerhouse in the international sailing world. If you are looking for rich descriptions of ocean racing, and/or insights into the world of the sailing “business” at its highest levels, this book succeeds admirably.