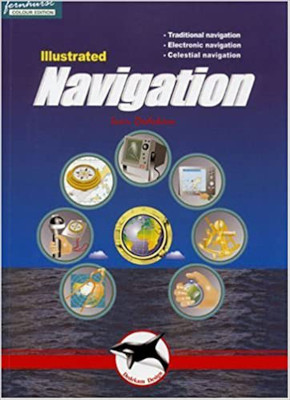 The first book ever sold by Good Old Boat magazine — call it the beginning of our Good Old Bookshelf — was the first edition of Illustrated Sail & Rig Tuning by Ivar Dedekam. Ivar, a Norwegian, needed a North American importer and distributor for his book, and we served in that capacity until his book got so popular that he was able to work with larger distributors.

We took on his book in those days (approximately 1999) as a “special project” because Good Old Boat co-founder Jerry Powlas was so impressed with Ivar’s explanations and illustrations on the subject of sail and rig tuning. We weren’t exactly in the business of selling books, but Ivar had something special, and we wanted to help.

Fast forward to 2005. Ivar has a new book out, another hit as it turns out, and we learned about it almost by chance. Our bookshelf has grown beyond our wildest imaginings. And Ivar’s book publishing business has blossomed even beyond that.

As with his previous book, the new one, Illustrated Navigation, is heavy with computer graphics and light on text. But it is amazingly concise and useful. It gives the reader a huge volume of useful information in a small package.

The electronic section takes a look at the GPS system and receivers, chartplotters, waypoints and routes, equipment displays and receivers, radar theory and operation, and collision avoidance.

One caveat for those of us in North America: Ivar’s books are translated into English by a British speaker, so when he recommends having a torch aboard, for example, he’s not playing with fire. Bring your flashlight instead.

A more major issue is with his description of the IALA A buoyage system. In North and South America and the Philippines, we use the IALA B system. So red and green markers are reversed in this book. But Ivar does make this point clear, if the reader is paying attention. If you cruise far and wide, you have to “speak both buoyage languages” anyway. Here’s an introduction for you.

A good book? You bet. Ivar Dedekam”s done it again.

Sailing Among the Stars: Book Review