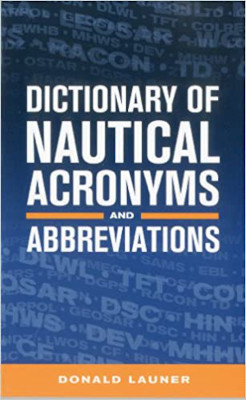 SYWNTB. After paging through Dictionary of Nautical Acronyms and Abbreviations, by Donald Launer, that’s my new acronym for Someday You Will Need This Book. Count on it.

This book, published by Sheridan House, may keep you and your boat out of trouble if you don’t recognize an unusual notation on a nautical chart. Or it may end an argument regarding the true meaning of a familiar and overused acronym. If nothing else, it will expand your nautical gray matter with useful and trivial tidbits.

Donald Launer compiled all the relevant nautical acronyms and abbreviations because he wanted a reference of this type for his own use. And he was kind enough to share it with the rest of us.

Don says, “Today, abbreviations, acronyms, and truncations are being used with increasing frequency. This is partly due to the widespread use of more sophisticated equipment on board, along with their associated complexities, and partly due to the sometimes mistaken belief that these abbreviations simplify explanations and identifications.

“For those new to boating,” he continues, “this problem is especially daunting, since it seems as if they are listening to or reading a foreign language. While many nautical terms, in themselves, can be confusing, some of the acronyms and abbreviations can be bewildering, and the many new abbreviations dealing with modern electronics can be mystifying, even for old salts.”

This book is organized in two parts. The first is an alphabetical listing of acronyms and abbreviations, as you would expect. It includes NOAA chart notations (in a much more convenient organization than the one offered by NOAA, which requires you to search for a notation such as dk or bu section by section). The dk means dark, by the way, and bu means blue. Black had already taken bl. Don lists these notations in italic type, as shown here, according to NOAA chart protocol., The second part of this book is an annotated version of Chart No. 1, in case you really do prefer to search for dk section by section.

This book provides helpful illustrations as well for abbreviations such as CB for center of buoyancy of a boat or Dec for declination of a celestial body. What do the words really mean? The illustrations will come in very handy. In fact, this entire book will come in very handy when you need it. What did I say? SYWNTB. Someday You Will Need This Book. 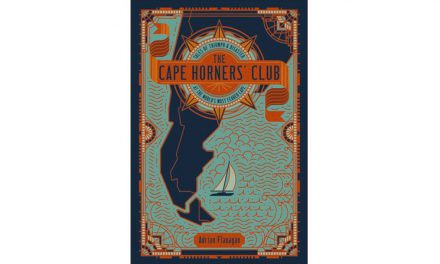 The Cape Horners’ Club: Tales of Triumph and Disaster at the World’s Most Feared Cape