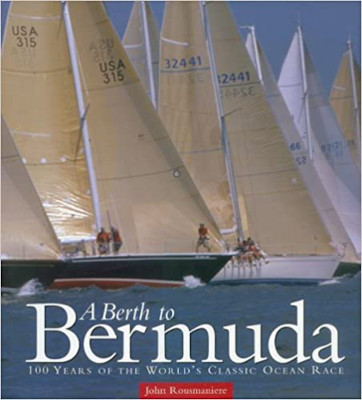 In order to encourage the design, building, and sailing of small seaworthy yachts, to make popular cruising upon deep water, to develop in the amateur sailor a love of true seamanship, and to give opportunity to become proficient in the art of navigation, an ocean race has been planned…

In 1906 Thomas Fleming Day organized a race that began in Brooklyn, New York, and headed east-southeast over 700 miles of blue water, crossed the Gulf Stream, and finished in Bermuda. The revolutionary thinking behind the Bermuda Race was his idea that ocean racing was not just for professional sailors in large vessels sponsored by wealthy tycoons, but rather “the ocean is a playground where amateur sailors cannot only sail small boats, but race them offshore.”

Thomas Day felt that “small vessels are safer than large, provided they are properly designed, stoutly built, thoroughly equipped, and skillfully manned.” His idea was met with skepticism, ridicule, and fear. Those fears were heard. Of the five crews supposed to compete in the first race, only three started. Rumors had it these boats had funeral wreaths delivered to them so the sailors could have a proper burial at sea. All three sailboats finished the race and all crewmembers survived. A tradition had been started and the race to Bermuda continues to present day.

A Berth to Bermuda chronicles each race (usually every two years) that has been held over the last 100 years. It also describes how the races taught yacht designers and builders, sailors, and navigators about sailing small boats on the open ocean. With his thoughtful analysis and commentary, author John Rousmaniere shows how the lessons learned from each race promoted changes in every aspect of sailing: yacht design and construction, sail making, racing tactics, seamanship, safety requirements, and navigation. The many photographs highlight these changes. They also show, from a historical perspective, how during the 100-year history of this race, sailing has changed from a sport reserved only for the rich to a sport of the common man. By the end of the book, it is readily apparent that one man’s idea and an ocean race played a significant role in creating the modern sport of sailing.

John Rousmaniere, author of 22 books, has sailed more than 35,000 miles, including seven Newport to Bermuda races. He is a member of the Cruising Club of America. His knowledge of boats and seamanship are put to good use in the organization and writing of this well-written book. The many photographs and detailed historical accounts of each race bring to life the sailors, racing tactics, and sailboats that participated in this challenging race. The reader is transported through time into the cockpit of ocean-going yachts racing through the Gulf Stream, while being informed of how the sport of sailing reinvented itself. It is an important book for the serious sailor as well as the curious sailor who wonders about the “why” and the “how” of the sport that occupies so much of his life.

A Berth to Bermuda – 100 Years of the World’s Classic Ocean Race by John Rousmaniere (Mystic Seaport and The Cruising Club of America, 2006; 206 pages)

How to Read A Nautical Chart: Book Review

Victura: The Kennedys, a Sailboat, and the Sea