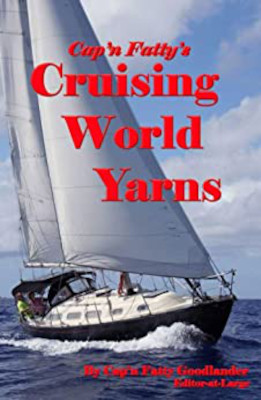 Fatty Goodlander is a sea gypsy. He was born into a family of sea gypsies and writes of this life with charm, humility and bountiful good humor. He was raised aboard an aged wooden John Alden-designed schooner, Elizabeth. Even through a cold winter hauled out in Chicago, his parents warmed Fatty’s heart with tales of the wonders that awaited the family in the tropical islands of the South Pacific.

In addition to self-confidence around boats and his love of the sea, Fatty’s father exposed him to the art of telling sea stories. He allowed Fatty to sit quietly in the cabin of Elizabeth and listen as waterfront characters told stories into the night. That ancient art form infuses Fatty’s writing, adding greatly to its appeal. Most readers of his columns in Cruising World magazine probably sense this intuitively. They may also recognize some of the “yarns” in this collection, but will surely enjoy their re-telling.

It is his professional life as a “salt-stained ink slinger” that supports his real life as a sea gypsy. Fatty readily admits that this keeps him and his lover/navigator/wife Carolyn on a very modest budget. But he emphasizes that sailing around the world on peanuts just requires “more effort, determination, and intelligence.”

Parkinson’s disease curtailed his father’s dreams of sailing to the Polynesian Islands but, decades later, Fatty completed the dream. He and Carolyn sailed into an anchorage off Fatu Hiva during their “big fat circle” aboard a boat they had salvaged off the bottom a decade earlier. The “yarns” in this book capture many of the high and low points in their circumnavigation — with a special focus on the people and cultures they encountered along the way.

This book can be read on many levels: as a “how to” guide for sea-gypsy wannabes, especially those of modest means; or as an armchair adventure filled with exotic people and places from around the world. For me, it is foremost a love story of a man, a woman, their boat and the sea (see page 29 for a powerfully moving description of what it means for a sea gypsy to lose a vessel that he brought into existence with his own hands). 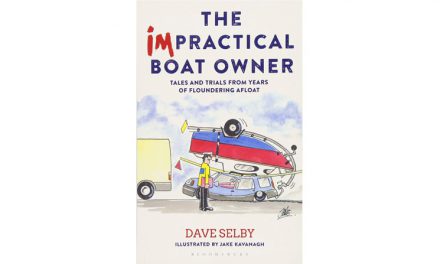