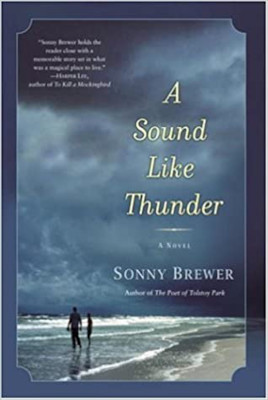 Have you ever wanted to leave everything and just sail away? Not for fun or adventure but for life and survival? What if you had a sailboat ready to go, money, no ties, and the love of a beautiful young woman? This is what Rove MacNee, the main character in Sonny Brewer’s A Sound Like Thunder was facing.

The story opens with Rove standing on a dock looking out on Mobile Bay. Distant lightning flashed in his eyes.

To the southwest, somewhere between Dauphin Island and New Orleans, was his father, Captain Dominus MacNee. Controlled by drink, lust, and rage, he would soon dock and bring home his usual mayhem. He could take his time as far as his son was concerned.

Behind the dock and up the hill was the Magnolia Bay house. Within its walls was Rove’s mother, Lilian. Who knew where her loneliness would take her?

In the young man’s chest was a heart that was about to come off its mounts because of Miss Anna Pearl Anderson and her not-so-subtle affection. Besides being the prettiest girl around, she had a love for sailing.

Beyond the dock and up the bay was Fly Creek and his very own 25-ft. wooden sloop. He had spent two years refurbishing this gift and was now ready for the final touches. When he sighted down the deck and beyond the bowsprit, his despair lifted.

The boy’s hands held his dripping mullet net. He couldn’t control his world but he could toss that net. The lightning was getting closer. The thunder was in his ears.

And in Rove’s mind he heard Joshua Slocum telling all young men contemplating a sea voyage to go. More and more, his response was, “Why not?”

Many of you would enjoy this book. There is hull repair while moored, cast net instructions, and a shakedown cruise. Anyone alive will remember that first kiss. Set in the mid-40s, Brewer captures the unrest of a nation on the brink of war. This is a story about a family coming apart. This is a tale of hope borne by the waves and driven before the wind. Hope indeed floats.

I have read Slocum, Melville, Jones, and London, each once. I have read A Sound Like Thunder three times. Maybe it is the fact that, some years back, my life flew apart, causing me to want to sail away. Like Rove, there was peace for me on the water.

I found this book by accident. Nothing about the title will naturally attract a sailor. It made me wonder if something like “The Captain’s Son” would have gathered more nautical attention. But I realized that A Sound Like Thunder is the only title for this book. Any son of a captain is bound to develop a weather eye. Rove MacNee heard both the freezing norther in his mother and the fevered hurricane in his father. If there is such a thing as a weather ear, this young man had it.