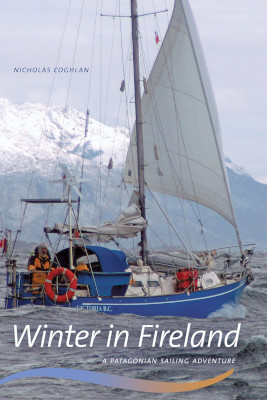 In 1978, newly graduated Nicholas Coghlan and his girlfriend Jenny moved to Buenos Aires to take a job at a private English school. While there, they traveled extensively on the continent, including an extended trip south to Patagonia and Tierra Del Fuego.

Fast-forward 25 years (that’s the first sentence of Chapter 2). Now Canadian Consul General in Cape Town, Nicholas and wife Jenny decide to return to the South by sailing there in a 27-foot Vancouver named Bosun Bird.
In September 2005, Bosun Bird departed Port Owen, South Africa (shades of John Vigor), and sailed to Rio de Janeiro, via St. Helena and Trindade. Then they headed south to Puerto Deseado, around Cabo San Diego, and into the Beagle Channel. After wintering over at Puerto Williams on Navarino Island, Chile, Bosun Bird continued west through Cockburn Channel and into the Strait of Magellan, then north through the Patagonian Islands and the Corcovado Gulf to Puerto Montt, sailing through terrible weather in some of the most isolated waters on the planet.
Winds were strong and contrary; charts were poor — “sailing in the white” meant going into blank areas where the chart hadn’t been filled in yet. Where protected harbors were found, standard mooring procedure called for two anchors, plus lines made fast to trees on shore—when there were trees. At one point Nicholas and Jenny were trapped in a rock-walled basin for nine days while gales blew down the channel just outside. Other days, progress was only a few miles.

Few people live in this cold, wildly beautiful part of the world. Not surprisingly, they are remarkable, like the fishermen from Chiloe Island, and the villagers eking out a thin existence along the shores. Coghlan writes about these hardy folk, and also of the previous explorers: Magellan, of course, and Slocum, but also Thomas Cavendish in 1586. One of his crew, a Welshman, named the thousands of swimming birds he saw “White Heads” or, in his native language, “pen gwin.” The Beagle spent two years in Patagonian waters, and Charles Darwin wrote extensively of the land, animals, and native people. More modern yachtsmen include Gerry Clarke, who circumnavigated Antarctica solo while in his 50s.

At one point, Nicholas and Jenny sail past four small islands in Beagle Channel, named Despard, Bertha, Lucas and Willie. They were named after the children of Thomas Bridges, a missionary who realized the futility of thrusting Christianity down the throats of the native people, and set to helping them instead. His wife, Mary, arrived at his outpost on the 42-ton Allen Gardiner, named after a man who led a group of missionaries to this area. After unloading their equipment, they discovered that they’d left all their ammunition on board the now departed ship.

Winter in Fireland is full of yarns like these. Coghlan will describe the day’s sail, mentioning the landmarks, telling what happened to previous explorers, then talk about the interesting people who make their living on these forbidding waters at the bottom of the world.

Nicholas and Jenny are now living aboard Bosun Bird “somewhere in the Pacific Ocean.” I’m hoping for another book from them about this journey. 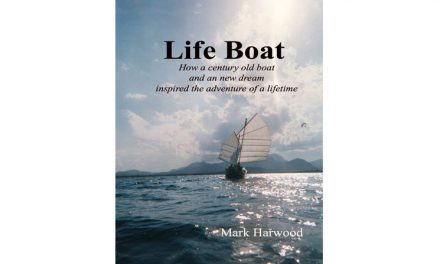