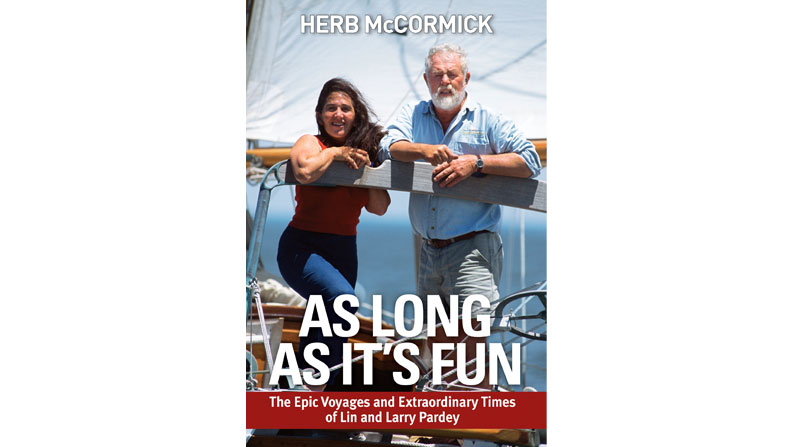 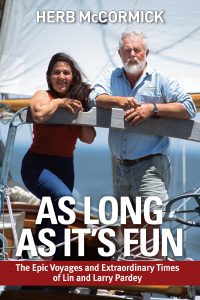 When told by Herb McCormick, the lives of Lin and Larry Pardey have the makings of a good nautical soap opera. Herb is a storyteller of the first magnitude and Lin and Larry, who have led very dramatic lives, allowed him to tell their story as long as he gave readers the full tale . . . warts and all.

I was particularly delighted to see a photo by Stark Jett V on the cover of the book, showing Larry wearing a denim shirt embroidered with the Good Old Boat logo. How lucky is that?

Take two very self-reliant and self-assured people who, when joined as a couple, become a very extraordinary sailing phenomenon. To build character, shake well throughout their lives . . . mostly at sea but also on land. Add a touch of irreverence, some irrelevance too, along with some humility countered by a good dose of independence. Throw in a strong work ethic, an incredible business sense with a Midas touch, and overtones of moxie.

What you get is a couple of cruising icons, sometimes even called sailing royalty. They didn’t start out to chase the acclaim they received, but they knew how to use it to their advantage once they’d arrived at the summit. They repeatedly said they’d continue cruising as long as it was fun and, luckily for those who followed in their wake, the fun has continued to last. Where would all those cruisers they inspired be if — like so many cruising icons — Lin and Larry had moved ashore after a few years spent circumnavigating, exploring, and having fun?

With his wonderful conversational, casual, and cheeky writing style, Herb relates each of the Pardeys’ financial ups and downs and a few of the more dramatic marital explosions. He makes it clear that these two always lived simple lives (usually without adequate funds, comfortable shelter, or the usual household conveniences) while building their boats, clearing their New Zealand property, and working for others. By choice they also lived very simply aboard their boats that clearly would be called Spartan by today’s standards. There was no engine, no head, and no electronic device, remember. And yet luxury surrounded them. They worked very, very hard every day. Yet in spite of that, they made their lives look to their fans as if they were on an extended holiday.

The first time they came by to visit the editors of the new magazine called Good Old Boat (about 12 years ago), I remember worrying mightily about these creatures of the sea who sailed around for months on end at just a few knots. How could they possibly be safe on our fast and increasingly complicated Interstate system? But they arrived safely and announced to us that they were grateful we had started this magazine so they wouldn’t have to. Apparently the kernel of a similar idea had taken root in their minds too.

They slept together on that first visit on a single bed in my office (formerly a spare bedroom). I had inflated an additional mattress to accommodate one of them, but they pointed out that they never had much room in their bunk on Taleisin anyway, so one small bed would do. And, to my amazement, it did. Later, as our business grew, even that little bed had to go. We did not have it bronzed.

They returned to Minnesota two more times. They came back once to present a workshop to the sailors here. The second time they were invited to fly here as our guests by members of the Good Old Boat crew. Their arrival and attendance at our 10th anniversary celebration was a complete surprise for Jerry and me. We all laughed to think of these two as a rather extraordinary anniversary gift.

Their special status as the superstars of cruising sailors impresses us to this day and we are not alone. Herb McCormick’s profile of Lin and Larry Pardey makes wonderful reading. If you are a fan (perhaps even if you are not), I highly recommend it. Besides, did I mention that Larry’s wearing our denim shirt on the cover?

As Long As Its Fun, The Epic Voyages and Extraordinary Time of Lin and Larry Pardey, by Herb McCormick (Paradise Cay Publications, 2014, 280 pages)