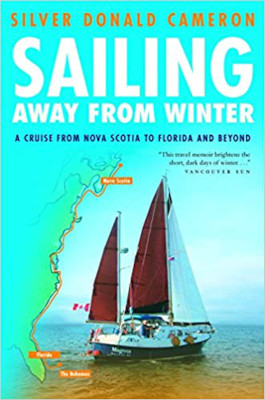 It’s great fun to go cruising with Silver Donald Cameron. Through his books we’ve traveled with him several times, and each time has been a pleasure. Don’s tales of his voyages introduce his readers to people he meets, places he visits, and events along the way. He tells us about their background and, through these historical glimpses, what they’ve become today. Don makes strangers and strange places meaningful to us. With the latest book, Sailing Away from Winter, readers will also develop a fondness for Don; his wife, Marjorie; and Leo, their aging wonder whippet and boat dog, also known as the BFD (brave and faithful dog).

This trio buys a motorsailer specifically for a 1,500-mile trip from Nova Scotia to the Bahamas, sailing away from a Canadian winter season via the Intracoastal Waterway. They are richly rewarded with an entire range of cruising experiences along the way. Pack your sea bag and enter their world; your own horizons will be broadened as a result.

Don acquired the “Silver” moniker in Nova Scotia, where the name Cameron is common enough for the need to distinguish between several Donald Camerons. Don, the author and sailor, is the one with the white hair. In this book he could have been called “Dandelion Don,” because he had a terrible time finding a barber along the Eastern Seaboard of the U.S., and that thatch of white hair became a halo before a hairdresser was finally located.

I have always admired Don as a master with words, and he’s done it again. His description of an evening in Halifax is a good example. “Catherine MacKinnon picked up her fiddle and began another haunting slow air, plangent and sweet and melancholy. It felt like an ethereal exhalation from the most ancient parts of the soul. And the past was all around us — the Acadians, the forts, the salty old seaport, the historic ships both above the water and below it. Sitting on the deck of a schooner, surrounded by my country’s past and bathed in its music, poised to sail into an unknown future, I suddenly realized that I knew exactly who I was, and exactly where I was. And I liked it.”

Don is honest about their trip down the Intracoastal Waterway. Equipment failed, the weather was sometimes unpleasant, clearing U.S. customs was a hassle, and grocery shopping and laundry became major events. Because they were making a late-season delivery, they pushed too hard and moved too fast. Sometimes lonely, at other times they had more social interaction than needed. But they had a good time, learned much about themselves and others, and found that they were fitter and younger-feeling than when they left. Once in the Bahamas, the pace slowed, and the madcap race to arrive was forgotten.

Reading this book will whet your appetite for more by Silver Donald Cameron. I can wholeheartedly recommend that path. You won’t regret any of the journeys you make with this man whose words are silver. Perhaps that’s a better reason for the additional name he has worn so well for so long.