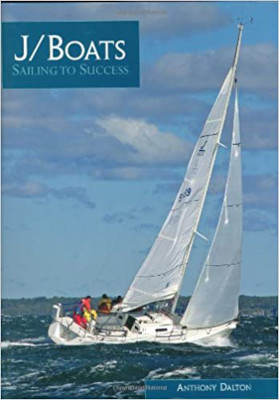 “I just wanted a sailboat for myself and my family, but along the way it turned into a great adventure…” These words by Rod Johnstone capture the spirit of the J/Boats company. In this book, Anthony Dalton has compiled a wealth of material and great photos that recount the adventure, from the founding of J/boats through the company’s growth into one of the world’s best known yacht vendors.

This is not a book about boat design, although the design concepts incorporated throughout the J/boats yachts would provide ample material for such a book. Rather, Anthony Dalton focuses on the people behind the success of J/Boats. It began as a family affair and is still very much so today, 30-plus years later.

The first third of the book recounts the founding of J/boats by Rod and Bob Johnstone, and the remarkable success of the J/24, their first boat. This story began slowly and modestly in 1974 when Rod set out to build “the largest, fastest boat we could build in the confines of our garage.” The 24-foot boat was built on a shoestring, and it was not until the spring of 1976 that the hull was eased out through the 9-foot-wide garage door, and later christened Ragtime.

At the end of a wonderfully successful racing season, Rod approached Everett Pearson of TPI and negotiated an agreement to have TPI manufacture a boat based on Ragtime, using her hull as the plug for the initial tooling. This very synergistic relationship with TPI continues today. Bob joined Rod in forming a partnership, and thus was born J/Boats. Bob led the sales and marketing efforts while Rod devoted his energies to design and production coordination.

The middle third of this book highlights the more than three dozen designs (to date) from J/Boats. It provides insights into the thinking behind the various designs, which ranged from cruisers to all-out racers. This section also discusses the roles of the sons of Bob and Rod, who joined the company during its rapid expansion during the 1980s, and how the family managed the challenge of succession planning.

The final third of the book highlights some of the extensive voyages by owners of J/Boats yachts. Many have circumnavigated, and others have cruised their J/Boats to high latitudes. Anthony goes to some lengths to assure the reader that J/Boats are not just pretty faces on the racecourse.

Anthony Dalton has captured the enterprising spirit behind the success of J/Boats. This book will appeal to everyone with an interest in fine sailboats and the companies behind them. It will be of particular interest to fans of J/Boats, including my wife and me, who cruise and race our J/32 here in the Northwest.