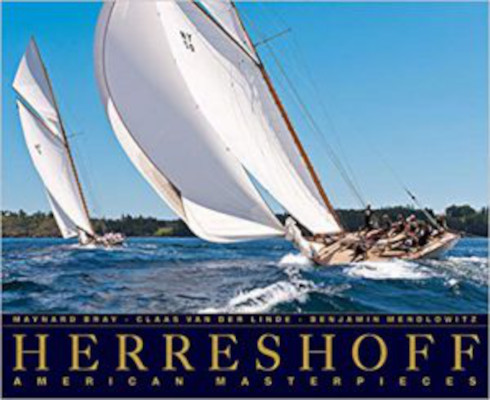 The thing I like about opera is its ability to bring together of so many complementary artistic endeavors to create a production that pleases all the senses. That is, a production where the whole is definitely greater than the sum of the parts, even when the parts are each first-rate. In that regard this book is a Puccini of publications. Whether you like opera or not, if you are at all interested in the history of our sport, this book brings a whole lot to the table.

The book focuses on 36 surviving boats and classes designed and manufactured by the Herreshoff Manufacturing company from 1889 (Coquina) to 1938 (Seafarer Class), with the 34 other boats in between, listed in chronological order. The foreword is co-authored by Maynard Bray and Claas van der Linde who provided the detailed and meticulously researched text for this book. Importantly, their foreword addresses N.G. Herreshoff’s unique design process, based on the older method of carving models rather than designing the hull on a drawing board in the then-established “Scientific” method. Indeed, Herreshoff throws a monkey wrench in my oft repeated narrative of the evolution of yacht design from “rule of thumb” modellers to drawing board designers. This emphasis on the model explains why there are so few lines plans in the Herreshoff Collection in the Hart Nautical Collection housed at MIT, and one could say is a harbinger of the current computer design method of “solid modeling.” The introduction is written by Kurt Hasselbalch, curator of the collection, who describes Herreshoff’s early engineering education at MIT starting in 1866, only one year after MIT opened, and goes on to explain how MIT ultimately acquired the over-14,000 engineering drawings in the collection.

Herreshoff was a superb engineer. Some will argue that his designs weren’t as breathtakingly beautiful as Fife or Watson, but there can be no doubt that he was a master of early production and custom boat building. That is one reason why so many of his designs survive today. They were just well and soundly built. Each “chapter” in the book focuses on a particular boat or class, listing the Herreshoff project number, the date of design, the class, and the principal hull dimensions. The text then focusses on the initiation of the project, for whom it was designed and built, the boat or class’ history and significance, subsequent owners, and the boats still in existence with histories of their rebuilding. The level of detail is exceptional, while still being immensely readable. Herreshoff started his career with his blind brother, John Brown Herreshoff, designing and building high-speed steam launches and patrol boats, so the book does include a number of elegant powerboats, as well as sailboats.

In addition to the remarkably detailed and readable text, what raises this book to operatic levels is the photography of Benjamin Mendlowitz. The photos span many years, transitioning from film to digital, but some of the photos are so remarkably beautiful that they illicit comparisons to a Christopher Pratt painting. Each chapter not only includes photos of the yachts under sail (or power as appropriate), but also detail photos of deck and interior. Accompanying every boat featured is a photo of the incredibly detailed construction plan, often with watercolor highlights to the drawing.

I was pleased to see the 1907 Canada’s Cup winner Seneca (to which I recently referred in my short article on bowsprits—“Bowsprits past and present,” March 2017), featured in the book, which elicited an intriguing and enjoyable email communication with Maynard Bray and Claas van der Linde, whose patience with my enquiries was admirable. Often the discussion of one boat in this text would lead to other boats associated with that boat. The chapter on the large “rule beater” P-Boat Joyant makes reference to “Corinthian, Joyant’s nemesis from 1911, has also survived, owned for decades in Toronto as Nutmeg III…..” Nutmeg was actually owned by Norm Robertson of my own Royal Hamilton Yacht Club in the late 1930s and early 40s.

This is a book of some substance, measuring 11½ x 14 inches, with corresponding heft. It is listed at $100 and would be a fine addition to any serious nautical library. This is truly remarkable addition to the record of the history of our sport.