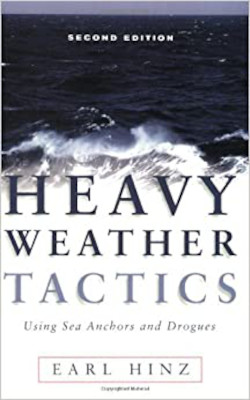 Several years ago I circumnavigated Vancouver Island. An experienced friend urged me to cancel the trip: “Stay inside, behind the island,” he admonished. “Inside, you might lose your boat, but out there, you can lose your life.” He was right, of course; and of course I went anyway. That summer, the weather and ocean treated me kindly.

Lucky sailors have little practical experience in dealing with gale conditions. Prudent sailors prepare themselves and their boats as best they can. They have to learn what to do by reading the experts, questioning those who have weathered storms, and practicing, if possible, before a storm hits. Then they have to improvise when all hell really does break loose.

Long-distance sailor Earl Hinz has just revised and re-issued his contribution to the literature of storm seamanship: Heavy Weather Tactics Using Sea Anchors & Drogues. Hinz’s underlying premise, surely correct, is that cruising boats are rarely big enough and rarely carry sufficient crew to confront a major storm with “active tactics.” But he also knows enough about storm conditions to understand that not many boats, and even fewer humans, can withstand the conditions imposed by the often-prescribed passivity of “lying ahull.” Instead, his answer is to throw out a sea anchor and meet the waves head-on. Or, if conditions allow you to run for it, tow a drogue to slow the boat and retain control.

Of course, in practice it isn’t so simple, and Earl gives us history, anecdotes, and practical direction on this critical topic. The book ought to be studied by anyone who contemplates an offshore voyage. The section on wave dynamics provides a particularly helpful summary of more detailed analyses found elsewhere. The discussion of life raft sea anchors will make you rethink your reliance on integral “ballast bags.” His many practical suggestions will help you make decisions about your own storm tactics, including ideas you might have overlooked even after substantial thought or experience. Have you considered whether your wheel steering system, even if tied off, can be damaged by the backward movement of a vessel lying to a storm? Do you have a well-designed riding sail?

While you can expect to learn plenty from this book, don’t expect to be entertained by a “good read.” Earl’s material needs organizing. He occasionally provides contradictory advice, for instance when discussing the best speed for running with a drogue.

You may be left questioning whether his prescriptions are the right ones. No scientists are on the ocean conducting controlled tests of how a tired crew on a battered small boat can best survive an offshore gale. Hinz recommends that you also read Shewmon’s Sea Anchor and Drogue Handbook and Victor Shane’s Drag Device Database. He is absolutely correct. If you want to go offshore, study them all: Cole’s Heavy Weather Sailing, the Pardeys’ Storm Tactics Handbook, and Dashew’s Surviving the Storm. If you still want to put to sea in a small boat, God be with you.