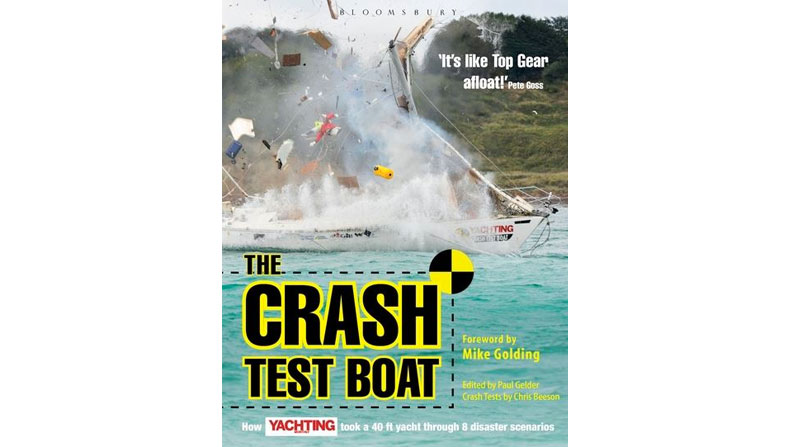 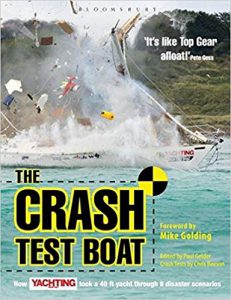 A few readers in the U.S. and Canada read Yachting Monthly magazine, which is published in the United Kingdom. But if you missed their eight-month-long Crash Test Boat series last year, you will want to read the book about it. Yachting Monthly is my favorite British publication and I was alternately fascinated by the subject matter and in awe of those who made it happen.

First they acquired a boat, a 40-foot Jeanneau Sun Fizz ketch. Then they ran it aground for an article discussing groundings and methods of getting off, capsized it for an article about what happens in a capsize and how to secure things in the cabin, followed by a dismasting … you get the idea. After the dismasting, the next month’s article focused on the possible jury-rigs that will get you home. They sank it, caused serious leaks to test ways to plug them, and set off fires to practice putting them out. Are we having fun yet?

Finally, they caused a gas leak and subsequent explosion that blew off the cabintop. Since that was the most dramatic event and the grand finale, there’s a video of that event. You don’t want to miss this: www.youtube.com/watch?v=Yxm3uMy6MPI. While they were at it, they made videos of the rest of the abuses they invented for this boat and posted them on YouTube. This book provides a handy QR code for videos of seven of the eight destructive tests. There were remote cameras inside, for example, when the boat capsized and when it exploded. That did it for me. I had to figure out how to scan QRCs on my iPad. I downloaded a free app and sallied forth.

Following the explosion, since the Crash Test Boat didn’t sink, they hauled off what was left of this poor abused sailboat to a boat show or two as a real show-stopper meant to cause people to consider safety practices on their own boats. Even Great Britain’s Princess Anne, a keen sailor, stopped by to see the Crash Test Boat and left with a thoughtful expression.

Mere humans created this series. What’s more, they were editors and authors and subject experts very much like the mortals at Good Old Boat. I know they were plenty busy with other projects and the daily grind of making a magazine happen. Some of them even have real lives beyond the magazine and sailing activities. They don’t walk on water. How then, were they able to pull off a feat like this every month?

The red tape alone would have dampened my resolve. In his introduction, Paul Gelder briefly describes the agencies that had to be informed and had to give their approval for every test. Appeasing every agency and bureaucrat was, no doubt, the most daunting task of all.

Each chapter in this book tells about the events and what was learned to make us all better sailors and boat owners, of course. But each also discusses how the destructive tests were accomplished: the setups and executions. Each includes equipment reviews where appropriate — equipment such as rig cutters or fire extinguishers — and also shares true-life stories of sailors whose boats were involved in similar disasters, whether it be sinking or fire aboard.

I wish they would have given bylines to the author of each article. I was not sure whether all articles (chapters) were written by the same individual or not. But it’s disconcerting to have the information presented in the first person singular as “I did this” or “I thought that” without knowing which of the team members did or thought such and such. Some of the British expressions, such as the “head torch” someone wore during one of the tests, will stop you cold for a moment until you realize that these folks speak the King’s English and we speak whatever it is that we speak, and it doesn’t include head torches when we mean flashlights on ball caps or elastic bands.

Sailors often say we should do a man-overboard drill on our own boats. Some of us actually do run a practice MOB event from time to time. But none of us is willing to run a practice grounding, capsize, dismasting, jury-rig, sinking, leaking, fire, or explosion. We must read about these events and take measures to avoid them on our boats based on what we learn in this way. We should be very grateful that a whole team of individuals at Yachting Monthly — editors and authors, subject experts, and members of the regulatory agencies, heroes each and every one — took the time and trouble to run the events, record what they learned, and share it with the rest of us.

All we have to do now is buy the book and read it. I highly recommend that you take that action. This book is an eye-opener. 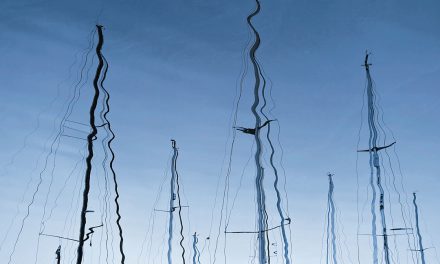