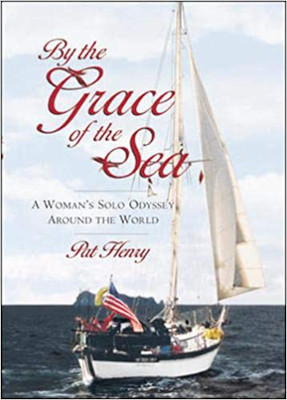 Most sailors have daydreamed about sailing away to escape life’s inevitable troubles . . . point the nose of your boat toward the horizon and keep going. Pat Henry didn’t daydream about it, she did it — a solo circumnavigation in her Southern Cross 31 (named Southern Cross) . . . a feat for anyone, but especially for a woman who was 48 when she began the trip in 1989.

Pat was escaping quite a bit: two failed marriages, a failed business venture (and along with that the long arm of the IRS), and a dysfunctional family. She was married at 15 and a mother at 16. Her parents divorced, creating an almost total separation from her father, who agreed never to see her again. As a child, she was shuttled between her grandparents and her mother.

This telling of her eight-year voyage is far more than just another story of high-sea adventures. It’s a personal account of Pat herself: her fears, desires, needs, and motivations. The book’s appeal is how well her adventure promoted her self-discovery and healed her psyche. It gave her the sense of accomplishment that had eluded her since childhood. The book chronicles Pat’s growth along the way as she developed the inner strength and insight to come to terms with “the real world.”

The story is even more appealing given Pat’s lack of funds to support her grand adventure. She worked hard during the voyage to develop her skills as an artist, showing and selling her paintings along the way to fund the next leg of the trip. She proves how resourcefulness and a marketable skill can enable someone to make such an adventure without a pile of cash. A highlight is how the cruising community comes together in foreign lands at times of need to help each other out.

Pat knows what her voyage means to dreamers. She writes: “The fantasy of ‘sailing around the world’ typically cast a dreamy haze over a person’s eyes when we met for the first time. ‘I’ve always wanted to do just what you’re doing.’ I’d heard it a hundred times. ‘I know,’ was always my response. ‘My job is living everyone’s dream. Someone has to do it.’ They’d look perplexed, and then we’d laugh.”

A refreshing contrast to Tania Aebi (another female circumnavigator) is that Pat was not new to bluewater sailing when she set out on this adventure. She had sailed some 40,000 open ocean miles on other people’s boats before setting out on her own. She knew what she was getting into. Hardcore sailors will get their fix of storms at sea and of exotic ports of call, complete with local characters. Even non-sailors will enjoy Pat’s very personal story of coping with life’s bumps and fulfilling dreams. This book will make fine winter reading for all who dream of pointing the bow for the horizon.

By the Grace of the Sea, A Woman’s Solo Odyssey Around the World by Pat Henry (International Marine/McGraw Hill, 2002; 351 pages) 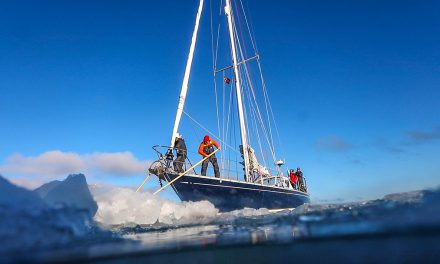