Without giving too much away, nothing was easy. Peregrine Took was a 32-foot Tahiti Ketch that Hoystradt built on the beach with locally sourced lumber and plans he bought for $5 from Popular Mechanics magazine—all during his Costa Rican Peace Corp service, all for the express purpose of leaving Costa Rica aboard that boat. It was an unlikely dream that was realized against big odds.

And it wasn’t a solo effort, neither the building nor the sailing. Hoysradt enlisted a motley crew of characters from Puntarenas locals to fellow Peace Corp members to help build the boat and some of them joined to crew various parts of the voyage. And two of those voices are included in the book, with several passages written by the bylined Carol Hill or Spencer Beebe.

Compass & Sextant doesn’t use narrative devices to pull the reader along, but is simply a straightforward chronological telling, in short well-written bites, of what happened. Without a story arc, it will appeal most to those who can identify closely with the dream Hoysradt realized, either because they’ve lived a similar adventure or longed to do so. And it’s a look back, at a world that no longer exists and a set of circumstances that would not be possible to replicate today, and so there is also a nostalgia that will grip the right audience.

And the memoir perhaps couldn’t be told another way. As Hoysradt writes, “We never had any intention of sailing the globe while we were building the boat or even when we started out on that Christmas Eve. It just happened. At one point it just became better to keep on going than to turn around and come back.”

Nearly 100 black-and-white photos are sprinkled throughout, amply illustrating the story.

Michael Robertson is editor of Good Old Boat magazine. He’s currently between boats, but lives with his wife and daughters only 90 minutes from Mexico’s Sea of Cortez. 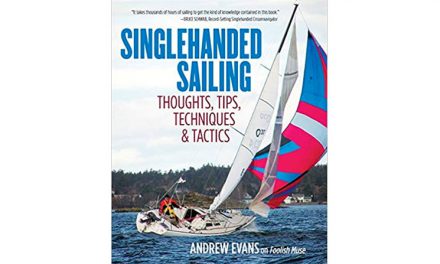