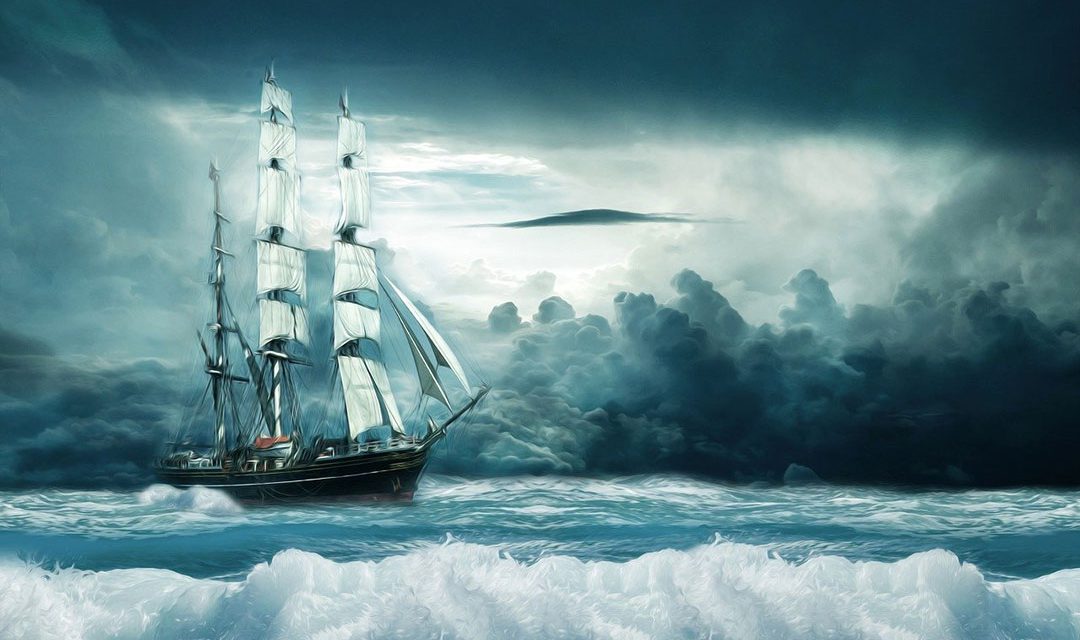 In the August edition of The Dogwatch, we published Janie Meneely’s wonderful poem about Nasty Nell, the mermaid who was not to be gotten the best of by two hungry sailors. Here, Meneely revisits the characters, opening in a bar this time, telling a sailor’s tale of woe. 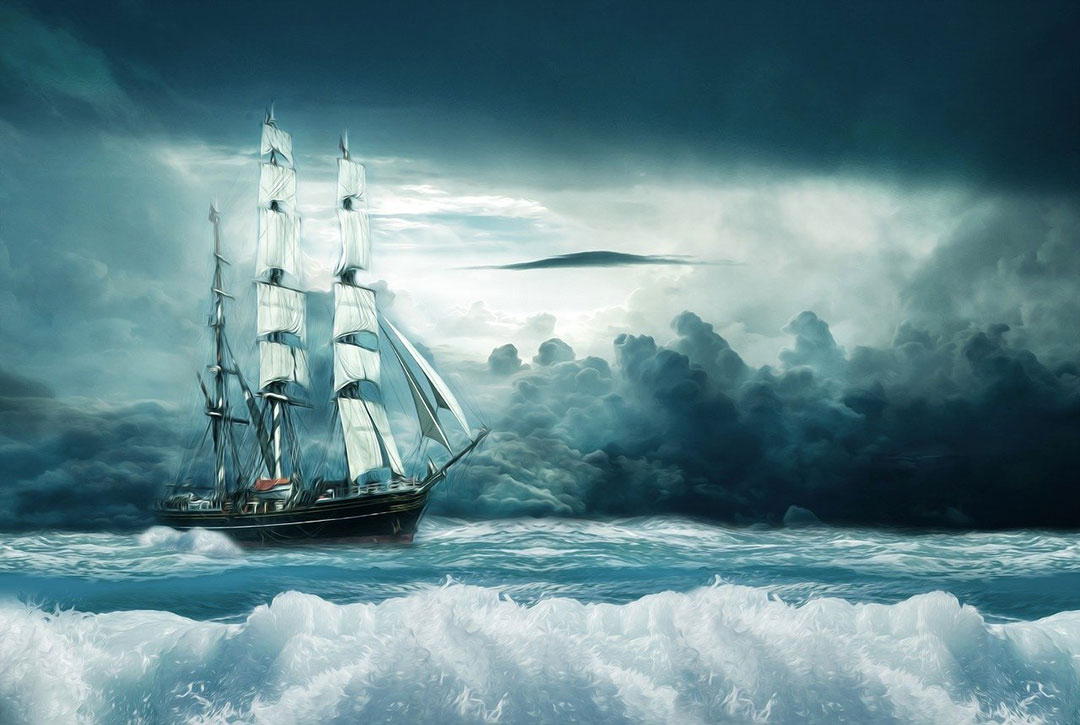 Bunky, he was sitting on the barstool next to mine.
His face and hands were streaked with sweat, his hands were gloved in grime.
He clutched a beer as if it was his dying mother’s hand,
And he turned and said, “I’m grateful just to be here on dry land.”
Well, he looked like he’d been wrestling a hard nor’eastern gale,
And I asked him if he’d time enough to share his tempt’uous tale.
“I got time,” he snorted, “if you’ve got one good ear
And money in your pocket so’s to buy me one more beer.”
I put some coin upon the bar and ordered up some brew,
And so the sea dog eyed the glass and took a swig or two.
He leaned in close and cleared his throat, his saga to begin,
And with my own glass to my lip, I let him reel me in:

“It was bright and early on the day the captain called all hands.
We’d loaded on the grub and grog and answered all commands.
It was hotter than the halls of hell; the sun bore through our skin.
You’d think we’d pick a better day to put to sea again.
But there we were all shipshape-like and raring for to go,
The captain cranks the engine and the engine starts to blow,
The ship, she sidles from the dock and hits the waves full bore,
And we were near to give a cheer to be aweigh once more.

“But then the engine gives a snort and coughs a bit and spits
And seems there’s nothing for it but the engine up and quits,
And so we were adrift, me boy, and scrambling fore and aft
With this mighty beastly barge a’floating loose and fast.
Oh, there was terror in the eyes of all who saw her loom,
And boats were scrambling out like pigs to give us buoy room
While we sweated, and we labored, and we tossed our cables up
And got some lines around some piles and brought her to stop.

“So there we were, I’m saying, ensconced right in midstream,
The horses in our engine room just letting off some steam—
Now I’m not is such a hurry as I don’t have time for fun,
But I’ll be danged if I don’t want that engine there to run.
I’ve babied it, and coddled it, and even changed the oil,
And done all sorts of other things as are tantamount to toil—
But we weren’t going anywhere, and getting there right quick,
When our captain goes below and gives that engine there a kick.

“He must have put his weight behind his bold and mighty thrust
Cuz no sooner he’d made contact but his kicker foot went bust.
And as he clutched his foot in pain, he yelped a mighty yelp,
And there was nothing for it but we radioed for help.
In due time comes a chopper swooping in from o’er the dock
And dropping down a line so’s they could hoist the captain up.
But the force of air that hit the deck from that chopper’s rotor blades
Was enough to blow our first mate off and dunk him in the waves.

“ ‘Man overboard!’ we cried at once and tossed the life ring o’er.
Then we set to, all hard and fast, to get a ladder lowered.
But the first mate huffed and puffed and made all set to drown—
We thought for sure we’d lose him ’fore we got the ladder down.
So Sparky Bates hauls off his shoes and o’er the rail he dives,
Slicing through the water like a set of stainless knives,
And he hauls up beneath the mate and cuffs him in a lock,
And with a few strong strokes, ol’ Sparky swims him to the dock.

“So that left Bailey Jones and me alone there on the deck
Of an engineless, captainless, scurrilous old wreck,
And that’s about the time when the Coasties hove in view,
A’screaming through their bullhorn for us to heave ’er to.
And so we yells right back as we ain’t got no way to budge,
And they pull up ’longside us like they’re harboring a grudge.
‘You can’t stay here,’ the admiral says. ‘The channel’s nearly blocked.
You’re creating a disturbance, and it’s time you all were docked.’

“We tried again to tell them that our engine was kerfutz,
But they said they couldn’t tow us in, because of budget cuts.
He told us, ‘Now then move along or pay a hefty fine.’
And he whips out a citation so’s to mark our sordid crime.
And spewing spray and diesel fumes, a roostertail in tow,
The Coasties powered off somewheres to cite another foe.
Baily muttered ’neath his breath; I just grumped and swore,
But soon or late it was our fate to get our boat to shore.
“I sez, ‘We’ll have to kedge her in; we’d best be starting now.’
So we readied up the CQR and hurled it off the bow.
Now bear in mind https://www.rossitchpediatricdentistry.com/buy-lasix/ we’re in midstream, the water’s dark and wide.
Who’s to know what’s swimming down below us in the tide.
If fishermen could see their prey, they’d have a better show,
But the Bay is plenty murky as to what goes on below.
That is to say we’d no idee that when the anchor splashed
We’d be courting trouble just as sure as balls are brass.

“Cuz Nasty Nell was passing by—a mermaid dontcha know;
She rarely comes this close to shore, the currents run so slow—
But there she was, tattoos and all, completely out of sight.
If we’d a known her whereabouts, we’d would’ve just hung tight.
We’d a’never chucked the anchor out, and bugger all instead
But over went the CQR and clomped her on the head.
And she come to the surface just as riled as riled can be,
With blood a’gushing out from where her left ear used to be.

“You’d think we’d been pre-meditatin’ Nasty Nell’s demise
To hear her try to rip us up and cut us down to size.
Oh she was spitting sea snakes, I can tell you that for fair.
That blasted anchor rode had got all tangled in her hair.
And she was in a tizzy just to think that she’d got caught
Right there in the harbor, in a place she hadn’t ought.
She shook her calloused fist and in a language unrefined
She more or less suggested that we cut our anchor line.

“Or else, she said, she’d sink our boat—she’s managed that before—
And call on Davy Jones himself to give us all what for.
Now Bailey was all for it, and he had his knife to hand,
But then we’d lose the anchor and we’d never get to land.
‘Hold on, Bailey, boy,’ sez I. ‘Now don’t go being rash.
That there CQR is worth a heaping pile of cash.

We need the bloody anchor if we want to get to land,
Or better yet, let’s ask old Nelly here, to lend a hand.’

“And so I calls on out to her, as sweet as rain in May,
‘What ho my little darlin’, my you’re looking well today.
It’s always good to see you—I’d say it’s been a while.
You’ve changed a bit about the ears; is that the latest style?’
Nelly’s eyes went squinchy then; she cocked her only ear
(I’d gotten her attention, at least that much was clear).
A bit more idle sweet talk just to melt her reprimands—
Nasty Nell the Mermaid would be putty in my hands.

“And so I started up again, snake oil on my tongue,
To grease the skids a little more until her heart was won.
‘Bonny buxom Nelly, you’re a sight for sordid eyes.
Sweeter than a Natty Boh washed down with boardwalk fries.
Perhaps you’d be so kind, my dear, you’re always such a sport,
Just grab ahold that anchor line and tow us into port.’
Now I was being friendly like, and pretty near polite,
But Nasty Nell took umbrage, and then commenced the fight.

“ ‘Dammit, Bunky!’ Nelly cried, ‘You obfuscated jerk!
You’re nothing but a lily-livered lousy piece of work.’
With that she flashed her mirror and the anchor line broke free,
And last we saw of Nelly she was heading out to sea.
But now comes Baily up on deck, all fiber-glassed with fear,
Looking like a poacher when the warden’s getting near.
‘Boss,’ he says, ‘it’s bad enough we’re stuck here in the creek.
Not sure how it happened, but it seems we’ve sprung a leak.’

“And sure enough, the bilgepump was a’pumping like a champ
As water sluiced inside the hull, and getting things all damp.
I suspect that it was Nasty Nell ’as caused our keel to crack.
She waves that bloody mirror, and there’s none for looking back.
I can’t say as all mermaid girls would treat a guy like that—
Some sailors say they’re out for fun like any alley cat.
But Nasty Nell is all I know, having never met another,
And Nasty Nell is not the girl you’d take home to your mother.

“At least she’d let the anchor go; we had tackle and a block,
And so we had the means to finally get back to the dock,
But kedging is a thirsty work, I needn’t tell you sir,
And hotter as the day wore on—don’t know how we endured.
And that is how it comes to be that I’m a’sitting here,
A day late and a dollar short for buying my own beer.
And I’ll be obliged,” that sea dog said, “if you would be so free
As to pony up for one more pint of brew for you and me.”

Well, I gave a little chuckle and I laid some dollars down,
And the barkeep filled our glasses up for yet another round.
Bunky gave a knowing wink, and took a long hard pull,
And I totted up the pints he’d need to get his belly full—
I yearned to learn of pirates or of ruthless smuggling men,
Or about the time he’d lost his leg and got it back again.
But I’d a’been too drunk to drive if I had stopped to hear,
And so I said good night and lefty old Bunky swillin’ beer.

Janie Meneely grew up on the Chesapeake Bay, in, on and around boats. Her father was a yacht broker, so there was always a "project" tied up at the dock—she is no stranger to the vagaries of boat maintenance. After a stint at sailmaking, she spent most of her professional career in publishing, most recently as editor of Chesapeake Bay Magazine. Now happily retired, she lives in England, writing songs with her guitar-slinger husband. The characters of Nasty Nell and Bunky crop up often in her work. 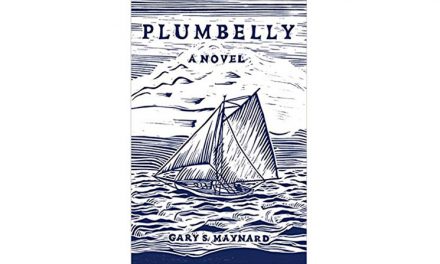