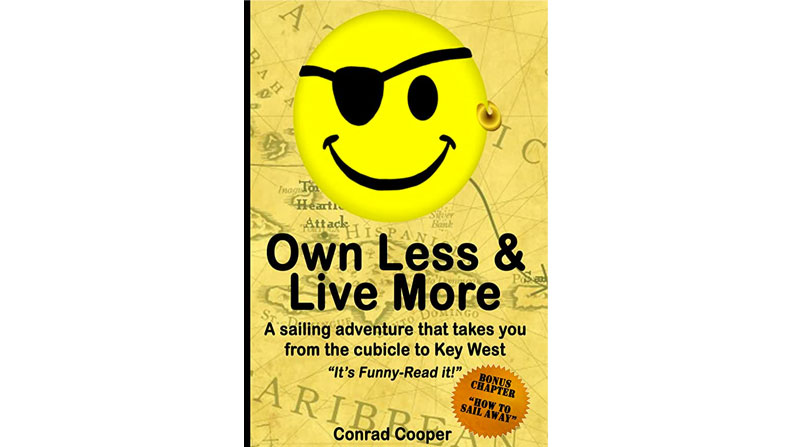 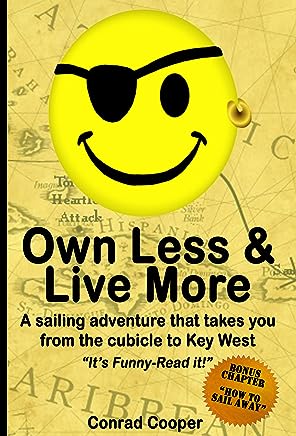 Conrad Cooper says, “You always hear people say ‘The journey is half the fun.’ I always thought that percentage was rather low.” Cooper definitely makes the journey through Own Less & Live More fun for his readers.

The subtitle touts it as “A sailing adventure that will take you from the cubicle to Key West.” It does indeed take the reader from the author giving notice he was leaving the corporate world to the west coast of Florida down to Key West. It would be more apt, however, to eliminate the word “sailing.” The book is a quick, easy, light read. It is entertaining and creative. But it focuses less on sailing than on a breezy look at Cooper’s suggestions for leaving the rat race and on descriptions of the coastal towns where he docks. In fact, the type of boat that carried Conrad, his wife, daughter, and black lab south was only mentioned — well into the book — as a catamaran, with no further details concerning make, size, etcetera.

That said, I enjoyed the read. Cooper is clearly enthusiastic and optimistic, and he wants to share his lifestyle with readers. Each short chapter starts out with a quotation that leads into his topic. He addresses everything from the vasectomy he had done while he still had medical insurance through his former company, to swimming with manatees, to the adventures he’d like to take now that his eight-month adventure on the water is over, to his definitely un-fun problems with the boat’s toilet. (He refers to the back porch, the bathroom, and the bedroom on the boat, explaining that he’s “not really into nautical terminology.”)

Cooper offers an interesting appendix with suggestions on the following areas:

Taken as a whole, Own Less & Live More is a good book for dreamers and those looking for light-hearted coaxing into an adventurous lifestyle. Overall, though, the advice offered only skims the surface.

Own Less & Live More: A Sailing Adventure that Takes You From the Cubicle to Key West by Conrad Cooper (Createspace, 2013, 146 pages)