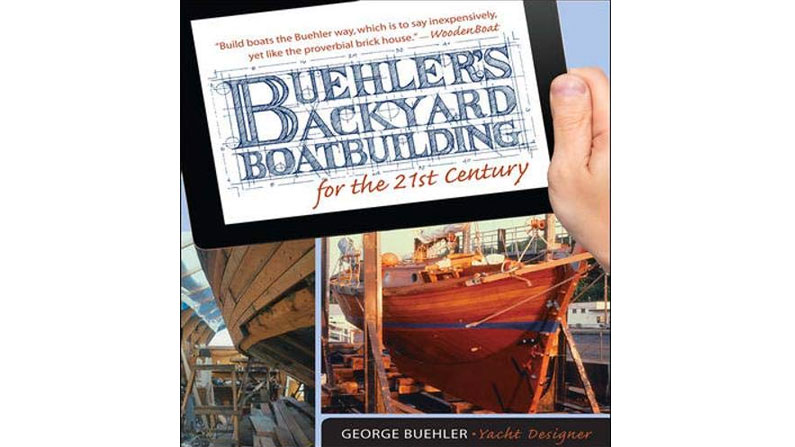 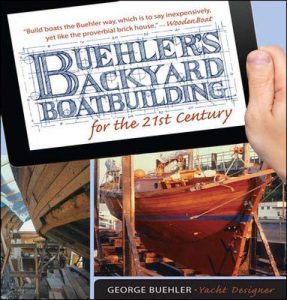 I first got the bug to own a sailboat sometime in the late ’70s and for a while I toyed with the idea of building one. However, as the years went by and I came to understand myself more, I realized that it just wasn’t going to happen. The building, that is, not the owning. Anyhow, while feeding the fantasy I managed to accumulate a library of boat plans and how-to books, one of which was the 1991 edition of Buehler’s Backyard Boatbuilding, so when the opportunity to review the 2014 edition presented itself I couldn’t say no.

George Buehler’s philosophy is that anyone with a reasonable amount of ambition and talent can build a safe, seaworthy boat if they want to bad enough and are willing to invest the time and sweat. To help simplify the process further, he takes a no-nonsense approach to the art. For example: his designs, primarily for wooden boats, use dimensional lumber available at most building supply stores; he uses roofing tar for bedding; he gives detailed instructions on how to build a ballast keel out of concrete and scrap metal; and the list goes on. As if this wasn’t reason enough, his writing style is straightforward and at times a little self-deprecating, which makes for a fun read to boot. When I purchased my original copy years ago I enjoyed reading through it, even after I knew I’d probably never build my own boat.

This issue includes complete plans for ten of his designs while the 1991 edition had eight sets of plans. And while the earlier edition mentions steel in a few places, this issue devotes a six-page appendix to building boats out of steel, although as stated above, most of his designs are for wooden boats. In fact, after comparing the two editions, I find that I’m revisiting an old fantasy. I just hope it doesn’t get out of hand. While most of the 2014 edition is simply a reprint of the earlier one, there’s enough new information here to make it a worthwhile purchase for anyone who’s ever considered building a boat.