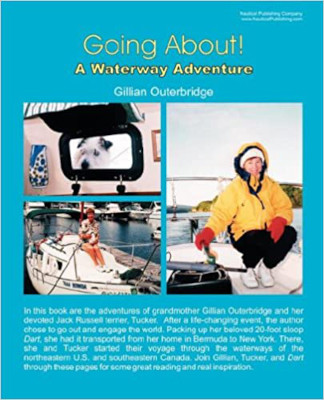 Lin and Larry Pardey describe Gillian Outerbridge’s photo-packed chronicle of her journey from New York through the waterways of the northeastern United States and southeastern Canada as a heartwarming, well-written story that illustrates “simple but elegant truths: alone does not equal lonely, and adventure comes in all sizes.” If Lin and Larry like it, it must be OK.

Actually, it’s considerably better than OK. It’s darned good. Gillian Outerbridge did something few single grandmothers do. She set off on a 20-foot sloop to bring to life a dream she’d harbored for some 40 years. From her launching at Liberty Landing Marina, right across from Ground Zero in New York, Gillian describes her journey in an easy-to-read manner peppered with droll humor. Of Tucker, her canine companion and avid hunter, she says, “I had to accept that I was living with a serial killer.” Her whirlwind search for the Flicka she named Dart was “marine speed-dating,” while the waves she encountered along the way were “short, steep and peevish.”

Together, over a period of two summers, Gillian, Tucker, and Dart explored thousands of miles of lakes and locks, breakwaters and bridges, marinas and “Merci Madames.” Inland canals, Scottish dancing, hot-air balloon regattas — the days were filled with serenity and serendipity as Dart’s crew of two embraced each new opportunity. Perhaps the most wonderful part of the story is the joy this mature matron found in the cruising lifestyle and her fellow explorers. In a letter to her mother, the author wrote, “I am so happy, I live with a grin.” Quite a change of course for a woman whose catalyst to take to the water was a traumatic ordeal at her home back in Bermuda, where she’d struggled with an intruder holding a knife to her throat.

The somewhat nervous woman who held the helm at the beginning of the journey morphed into confident skipper as she traversed the Erie Canal, the Trent-Severn, Georgian Bay, and the Thousand Islands. She squeaked under bridges, progressed through lock after lock after lock, and weathered a passing hurricane.

With refreshing honesty, the author candidly describes her trepidation at the outset, the “conflagration of charred bridges” she left in her wake, and other assorted struggles. “I discovered,” she says, “that when an unexpected challenge arose, I was far too busy dealing with the circumstances to be afraid. I faced all the fears and concerns, the apprehension and qualms, and dealt with them. I just plowed on through them and emerged on the other side, stronger, braver, and ultimately proficient in survival skills.” 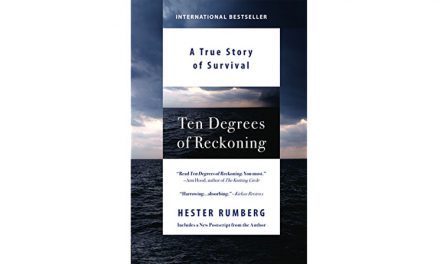 After the Storm, True Stories of Disaster and Recovery at Sea: Book Review