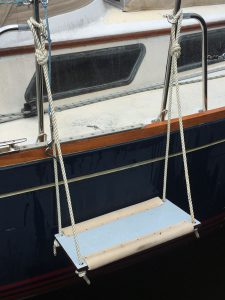 My previous boat was a traditional cutter with an outboard rudder and boomkin, precluding the use of a common stern swim ladder. The wooden side ladder she came with was cumbersome and difficult to store. I replaced it with a simple step which hung over the topsides, and life was good. I eventually sold that boat and bought Nurdle, a 1979 Bristol 35.5 equipped with a conventional transom-mounted swim ladder. All was well until, in preparation for extended cruising, I decided to install a windvane self-steering device and the ladder had to go. Drawing inspiration from that simple step, I decided to make an improved version.

The original was a 2 x 12 plank, sturdy but very heavy. For the new one, I selected a piece of ¾” mahogany plywood, salvaged from a bulkhead replacement project on a friend’s Alberg 30 (“No Time for Perfection,” Good Old Boat, November 2014). The gate stanchions are 24 inches apart, which determined the step’s width. I had considered making it deep to fit a telescoping swim ladder, but that would require a depth of about 18 inches, which seemed excessive. I selected a generous 12-inch depth.

I started by drilling ¾” holes in the corners to fit the ½” suspension lines. The scrap ply I was using was already varnished and I left it this way on the bottom. But on the top, I wanted a nonskid surface. Having used KiwiGrip on my deck and been pleased with the results, I decided to try a homemade equivalent. I bought a pint of rejected latex paint at the big box store for $1.25. I removed the lid off it and let the contents dehydrate for a week or so, until it was goopy. I then laid this goopy paint on thick, using a texture roller to create a pattern. The result was acceptable, but I think the paint could have been even thicker at the start. Next time, I may try adding wood flour as a thickening agent.

After painting, I attached fender material to the front and back edges. I created this by splitting a pool noodle from the dollar store and removing a strip ¾” wide strip longitudinally. Pipe insulation may have been a good alternative and comes in different diameters. Satisfied with the size and shape, I cut strips of 10-ounce cotton duck I bought from Sailrite, hemmed the edges for easier handling, and applied them to the foam with contact cement. Next, I tacked them in place with small bronze ring shank nails, typically used to install brass weatherstripping. (Note: when purchasing these nails, bring a magnet with you, as some are only plated steel and will rust. 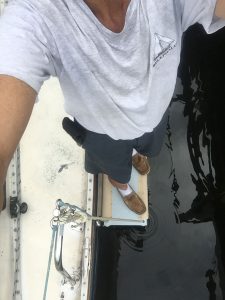 Next, I ran the suspension lines thru the holes with a stopper knot below. A loop at the appropriate level allowed hanging from the braces on the gate stanchion via a bow shackle. I use stopper knots to adjust the height so that it hangs where I want it, usually about 18 inches above the waterline, level with the top of the inflatable dinghy tube. When we have dogs aboard, I hang it higher so they can use it to help get themselves aboard. For swimming, I hang it much lower, closer to the water.

A friend expressed concern about the force the step is exerting on the stanchion bases, but given that the force is aimed nearly directly downwards, I think the force is less than might be created when leaning on the lifelines underway.

For another take on making a boarding step, check out “On-the-Fly Boarding Step,” an article by Connie McBride that appeared in the November 2017 issue of Good Old Boat.

John Churchill grew up a boat-crazy kid in Indiana. He built a raft at age 6, sailed Snipes as a teenager, and worked his way toward saltwater and bigger boats as an adult. He has singlehanded a Cape Dory 26 to Bermuda and back, and sailed a Bristol Channel Cutter transatlantic with his father. Now in Florida, John races and daysails Nurdle, a Bristol 35.5 (and former repo) that he’s rehabbing for extended post-retirement cruising.