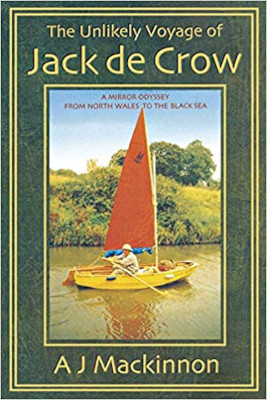 When Sandy Mackinnon set out on a vacation trip down the River Severn, in England, he wasn’t planning to be away more than two weeks. His boat, after all, was a 10-foot 10-inch Mirror Class dinghy that he could only sail or row. But somehow, as he says, things got out of hand, and “almost by accident” he found himself 3,000 miles away in Romania a year later, and still rowing. This book is about the adventures he had along the way.

Thirty-four-year-old Sandy, an Australian teacher of English and drama, somehow managed to sleep on the Mirror beneath a boom tent when he couldn’t find a handy bed-and-breakfast place at night.

Sailing folk will cringe at the cavalier way he treated his boat, which he named Jack de Crow, and his inability to make repairs after the inevitable accidents. But when Sandy put yet another hole in the bottom, someone would magically appear with a workshop full of tools and marine plywood and fix the problem for him for nothing.

His sailing and navigation skills were rudimentary, which got him into a lot of scrapes, including getting lost on a solo crossing of the English Channel, but what he lacked in experience he made up for in guts and determination as he made his way at a snail’s pace through 12 countries, passing through 282 locks on the way.

Sandy frequently exaggerates to bolster up the funny bits. Given some of the truly strange things that happened to him, it shouldn’t have been necessary to exaggerate in parts and thereby cast doubts on the veracity of the whole. It was O. W. Holmes who said: “I never dare to write as funny as I can.” That’s a lesson Sandy has yet to learn.

Week after week, while he dragged, pushed, sailed, and rowed Jack de Crow across Western Europe, over the Alps and down the mighty Danube to the Black Sea, Sandy made friends with a fascinating variety of locals. His encounters with them make for rich entertainment.

Yet this book still comes across as curiously one-dimensional. For instance, Sandy makes no reference to the Vikings, who made that grueling trip regularly with their trading boats a thousand years before him, hauling the craft over river shallows and solid land on rollers as they made their way to the Black Sea. Neither does he mention the intrepid American journalist Negley Farson, who sailed the 26-foot yawl Flame across Europe from the North Sea to the Black Sea in 1924.

Nevertheless, there’s still plenty of well-written substance here, plenty of vicarious thrills for anyone who wants to experience a hair-raising European rowboat trip without the bother of leaving the couch. 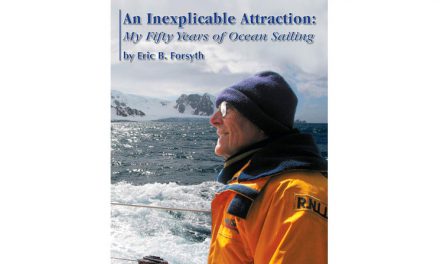 An Inexplicable Attraction: My Fifty Years of Ocean Sailing 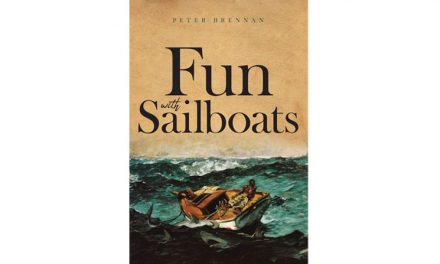