The Oceans Are Waiting: Book Review 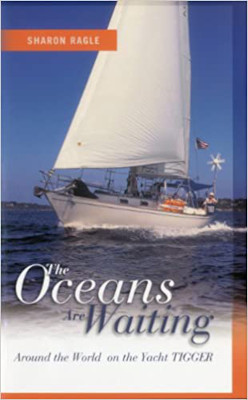 When out of nowhere this voice said to me, “You will sail around the world”. Before I could even think, ‘Where did that come from?’ another part of me just said ‘yes.’ ” This comment, from a middle-aged divorced woman with no background in sailing, is unusual enough for me to say that I don’t understand, but perhaps it was meant to be. She did sail around the world!

Accepting her destiny, Sharon Ragle bought a 32-foot Allied Seawind II ketch to use in her quest. This was a good old boat by most any one’s standards, but then she had another epiphany. She no longer wanted to be alone so she ran an ad in Cruising World for a partner. From an ensuing list of would-be suitors Sharon chose/fell in love with Dave, and they were married. Her plan now included Dave and his Tartan 37, another old — but not as old — good old boat. Sharon sold the Seawind.

The couple set sail in December 1993, and they completed their circumnavigation on June 4, 1998. On their voyage, they approached each new challenge with a little naivete and also some savvy. Dave had been a sailor for some time but, like most of us, he had his experience much closer to home.

There are idyllic moments in sailing and sometimes hours/ days/weeks of great discomfort. Yes, the oceans are waiting with sublime joys of God’s creation that cannot be adequately described. The oceans also have a profound indifference toward the sailor and will bring pleasure and pain. The Oceans are Waiting is a glimpse, but an honest glimpse, of sailing in a small boat.

This book is not heavy-duty reading, but it is enjoyable much like letters from a friend who is sharing the joys and trials of reaching for a dream. Sharon’s book has a couple of applications. You may find more, but here are the ones I have in my mind.

1. The book is broken into 30 small chapters, each with a story to tell that takes the reader away from wherever you are to a leg or observation or adventure somewhere on Sharon’s “meant-to-be sail around the world.” It could be read a chapter at a time whenever you need to get away. The chapters average less than seven pages each.

2. You could add this book the long list of books that a prospective world traveling sailor might read before setting out. There are plenty of things to learn from the experience of others concerning cultures along the way and in solving problems with equipment, the sea, and yourself. 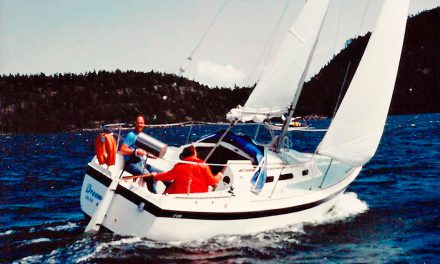