I am somewhere between the middle and end of refurbishing for fun and charter my 1982 Islander 48, Crescendo, hull number 1. She’s just about ready to move from Port Charlotte, FL where she’s been on the hard for just under three years at Safe Cove, Inc., undergoing some major repairs and a lot of minor repairs. She is finally in the water and we’ve just completed installing new halyards. All that remains is planning the best time to move this deep keel boat during the right tide and weather window.

Three days after installing the halyards, the marina called and asked if I was planning on working on the boat that day. When I told them no, they suggested I might want to come down anyway, because they had received two reports from other boaters of a lot of bees around the top of the mast.

I drove down that afternoon, after stopping to pick up some wasp and bee spray, and some bug bombs. When I got there, I was not prepared for what I saw. Bees everywhere, all over the top of the mast, upper spreaders, lower spreaders, and covering every port window inside the boat. The entire boat buzzed.

Moving slowly, I carefully lowered two bug bombs down the main hatch on a string. I believe the bees considered these an appetizer, as they didn’t seem to affect them at all. I returned home to research the problem.

Aware that honey bees are in decline, and that moving the queen would be the best way to rid myself of a bee problem, I began contacting bee removal companies. Some flat out turned down anything to do with a boat, but one local said he would come down and take a look. He advised me the typical cost of bee removal was $400, and that it could be more if there was a hive in the mast. 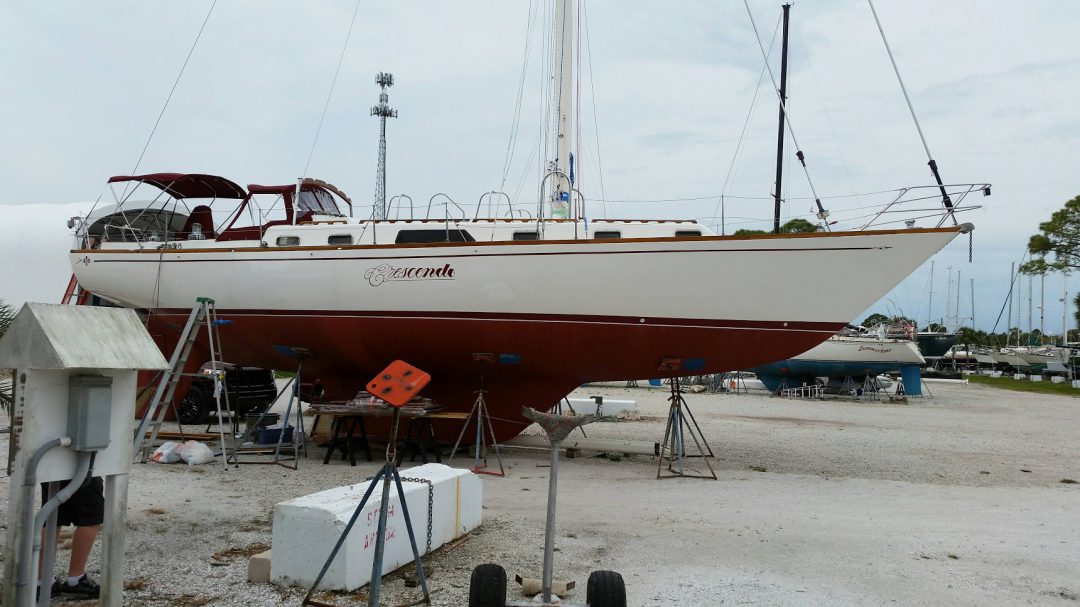 He arrived the next morning and determined that there was probably not a hive in the mast, but that there was definitely a queen somewhere. He said the bees couldn’t be saved, and he recommended extermination. He said he would cut the price in half if I agreed to do the cleanup. He disappeared down below, without a bee suit. Fewer than two minutes later he reemerged, closed the hatch, and drove away.

The next morning I returned with two shop vacuums and began the horrible job of cleaning up thousands of dead bees (FYI, they stink). Then I heard the buzzing in the mast.

Acting on an internet tip, I put moth balls in the mast. After three hours spent scrubbing the floors with diluted bleach and vacuuming the bilge and mast, I put my ear to the mast. No more buzzing.

Advised to remove and clean the new halyards (in case there were any remaining pheromones), I tugged on the main halyard and quickly saw that the genoa and stay sail halyards were also moving. I realized then that there was a hive in the mast, and it was holding the halyards together. I gave the main halyard a big yank and it immediately broke free. Then I saw them, a few hundred angry bees coming out of the mast and looking for the halyard yanker. I ran for my truck and got in, but not before getting stung several times. 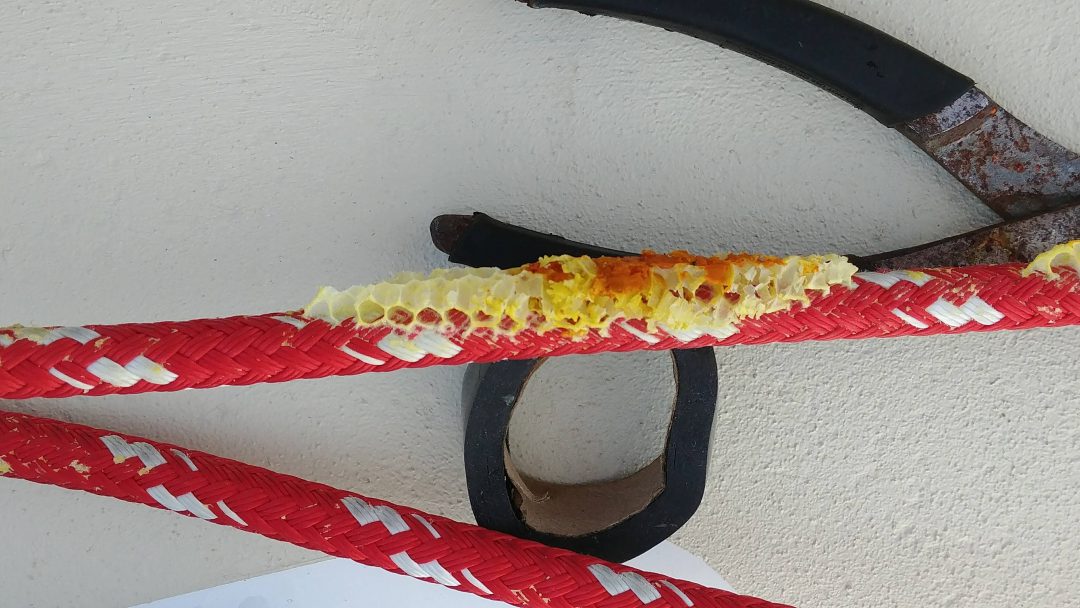 Frustrated and angry, I called the bee removal folks. They were there within 15 minutes, and sprayed the inside of the mast, through a halyard opening. The poison couldn’t have gone up more than three feet and I was skeptical of the efficacy, but I couldn’t find anyone willing to go up a mast full of bees.

The bee removal guy suggested removing the mast. I researched alternatives for several hours and finally settled on a plan.

With most of the bees in the mast now dead, I could feed a messenger line through a halyard opening on deck and down to the bottom of the mast. Then I could attach the halyard to the messenger, pull it down to the step, and attach the halyard to a sewer cleaning attachment fitted to a pressure washer. This nifty little device sprays the water back towards the hose, at a 45 degree angle, and uses a small spinning head with three orifices.

The next day I cleaned another foot of dead bees out of the mast and there was again silence. But as soon as I began moving the halyard, I could hear buzzing and they resumed their attack. I called the bee removal company back to the boat. With their gear and help we could get the mast cleaning done.

We designed a lift bail for the pressure washer fitting, joined 75 feet of pressure washer hose, and donned our unbelievably hot and uncomfortable bee hood, long sleeve flannel shirt and leather gloves (it was about 92 degrees, 80% humidity, and full sun). With one person inside the boat feeding the pressure washing hose, and the other outside the mast hauling the main halyard up and down, we began a high pressure wash of the inside of the mast. We’d go up two feet, down one foot, up two feet, etc. until we reached the top, and then did the same routine in reverse on the way down. Exhausted from the heat, we broke everything down, cleaned the dead bees and the hive parts from the mast, poured some bleach into a cup at the bottom of the mast to discourage returning bees, and left.

The next day I could still see bees hanging around the mast head.

I went back to the internet for answers and learned that to a bee, diatomaceous earth is like walking on glass shards. I put a bilge hose into the mast opening in the bottom of the mast (it was the perfect size), and duct taped it to the mast. Then, I went on deck, poured three cups of diatomaceous earth into the hose, then taped the other end of the hose to my leaf blower and fired it up. The earth went all the way to the top of the mast.

Two days later I returned to find not a single bee. I attached messenger lines to the halyards and pulled them out. There were bits of hive on each halyard from about 50 feet to 52 feet up the mast.

Reading further, I learned that normal dishwashing soap is not only good at removing hive bits from halyards, but is also an ecofriendly way to eliminate bees (the soap dries out their exoskeleton). I next made a soap injection system for the pressure washer and once again hauled the high pressure sewer cleaning nozzle up the mast. I wish I had recorded what happened next. Hundreds of bubbles streamed from the top of the mast! But the approach worked, removing all remaining hive, insecticides, and anything else that didn’t belong inside the mast.

I took the halyards home. There is quite a bit of advice on what to do/not to do when washing halyards, and one big no-no was washing new halyards in a washing machine. So I placed each neatly coiled halyard in the dishwasher, added a mild laundry detergent, and washed them with extra high temperature water, no drying.

Confident the bees were gone, I wanted to be sure that no hive remnants remained, as these would draw them back. I bought a wireless endoscope, with just under 40 feet of cable for about thirty dollars. A free application allowed me to wirelessly connect the endoscope to my cell phone. The end of the endoscope is less than a ¼ inch wide, and there are a circle of LED’s around the camera for light. The wire to the camera is stiff, so I simply made a few wraps of the wire around a halyard, bent the head of the camera to about 45 degrees and slowly hauled the camera up the mast while recoding the video. The whole process took less than 30 minutes, and when I got home, I could watch a high definition picture on a big flat screen TV of the inside of the mast as the camera went up and down.

It looked very clean, with no bees evident. Then I saw it: a 3 inch piece of hive hanging from the topping lift. I’ll have to remove and clean that as well.

What would I do next time? Blow diatomaceous earth inside of boat with a bilge hose. Clean dead bees from cabin, blow diatomaceous earth up mast. Clean dead bees from mast, run sewer cleaning nozzle up the mast, using a halyard, and a soap dispenser. Rinse with fresh water. Send endoscope up the mast and record to be sure all bits of the hive are gone. This would cost about a quarter of the amount of money I spent and take half the time.

Glenn Hipp has been sailing boats since he was 10 yrs. old, starting with a Sunfish and progressing to a Macgregor 25, Macgregor 25X, Pearson 303, Pearson 34, and his current Islander 48. His father, an engineer, instilled in him the importance of learning skills. Electrical, mechanical, plumbing, design and engineering have all been very useful in the repair, refurbishing and maintenance of his boats. Glenn currently resides in Sarasota, FL.