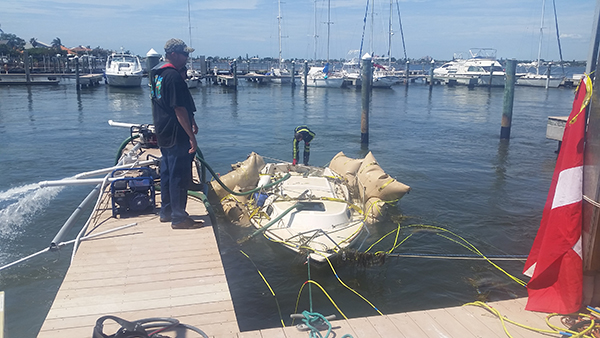 As I was reading Jerry Thompson’s article on how to maintain trailer wheel bearings (“Keep that Trailer Rollin’,” November 2017) I happened to see a sidebar in which he refers to “the Gloucester 22 I just bought.” I owned a Gloucester 22 for 17 years, up until it it was hit by a piling at the marina in Florida and sank, all a result of Hurricane Irma. I towed it to the landfill a couple of days ago. Before the hurricane, I took off a mainsail and headsail, both in excellent condition and made specifically for this boat. I also have an excellent engine for this boat and miscellaneous parts, including a spinnaker and a drifter and a roller furler for the genoa. I also have the trailer. I am now selling it all. Any Gloucester 22 owner might be interested. For photos and contact info, see my website: http://www.brianbeaudry.com/.

The photo is of my Gloucester 22 being salvaged at the dock. It is a shame, she was a great boat. I had a lot of fun with her. –Brian Beaudry, Tierra Verde, Florida Earl Keister captured this photo of Magic, an Alerion-Class Sloop built in 1980 and sailed by his uncle, Alfred Sanford. Magic is a precise replica of the sailboat Nat Herreshoff built for himself in 1912. Also pictured is Nantucket Island’s iconic Brant Point Light, off the coast of Massachusetts. Send michael_r@goodoldboat.com your favorite hi-res photo of an aid to navigation, be creative. If we use your pic in Good Old Boat magazine I’ll send you a Good Old Boat cap or shirt.

Last month I put it to the readers about lithium-ion battery technology on sailboats: Is it time? It seems nobody is on the fence regarding this issue, and we’re not all on the same side of the fence. –Eds.

Please remember that lithium batteries are too light for many sailboats. I currently use forklift batteries and plan to use NiFe batteries for the next sailboat I build. Sailboats need ballast and light batteries can be counterproductive.

Lithium batteries are not a good idea; I would never use them. If overheated, they will self-ignite, even if they contain internal charging protection. In a boat fire, you have no place to run. Same for an airplane, like what happened to UPS during a battery shipment. Does anyone have a fire extinguisher that can snuff out such an intense fire?

Lead acid batteries are time-tested and proven technology. They also provide signs that they are getting weak. LiPO batteries do not, they just suddenly go dead. Other than the weight savings, there is no advantage to using them on a boat.

With all the other junk on my boat, saving some pounds on batteries is not much of a benefit either.

I am not sold on Lithium as house batteries. The high cost and fire danger are my main concerns.

We converted the house battery bank on Sunrise, our good old catamaran, to lithium-ion batteries. What, you say, would lead us to reject tried-but-true lead-acid batteries for bleeding-edge technology in the midst of recent sensational news regarding exploding smart phones and self-incinerating super-jetliners? Last winter, after our 15-year-old charger/inverter got stuck in bulk charge mode and cooked four hundred amp hours’ worth of AGM batteries, and almost caught fire to our boat, we had questions. We were questioning convention and our safety assumptions and concluded that any system that converts large amounts of electrical energy to chemical energy and back again is not without risk. We decided it was time to do some research…

As a professional electrician with 38 years of field experience — including installing and maintaining large DC banks of power — I would urge readers, without regard to lithium ion batteries in particular, to consider the safety advantages of leaving behind flooded/wet-cell technology for other types, particularly when upsizing battery banks, as the inherent dangers of any battery technology get more serious as the size increases.

It is possible to compare the increasing size vs. hazards logic to the dangers of gasoline: a thimbleful exploding is a scary nuisance, but a bucketful exploding is a major safety disaster. I would urge readers to really think before selecting batteries of a type for which the out-gassing byproduct is a gas that readily explodes, and that contain a dangerous liquid electrolyte that can (and will) go anywhere it can, including into your eyes, if the case ruptures (or is simply turned on its side long enough to leak).

Regarding the cost of AGMs: I offer a trade secret. Many data centers and telephone companies use AGMs for electrical infrastructure, for switching and for uninterruptable power supplies. Quality AGMs are frequently designed for a service life of 10 years, yet a best practice in these industries is to do system swaps on a 5- or even 3-year cycle; thus, by approaching battery service providers for these industries in your area, it is possible to get AGMs with many years of life left, for a substantial discount, or, as I have found, for merely the trouble of being there during a swap to haul them off. These batteries have lived in an air-conditioned, vibration-free environment, enjoyed sophisticated charging (often each battery in the string treated as to its individual needs), and usually a knowledgeable person was in charge of their care. And keeping them out of the waste-stream for a few more years is a very nice thing for you to do!

Are lithium batteries the future? Some improved battery design is the future. It might involve lithium or maybe not. There are several lithium + (something else) battery chemistries. Some are more efficient, some are safer. They are not the same. Each type requires its own charging regimen and each requires electronics attached to each cell to properly charge the battery. For a boat, costs are still way too high. Hybrid cars have a pretty good safety record. Other devices do not. Replacement costs for batteries are too high to make electric cars practical without subsidies. With subsidies anything can be “practical” provided the taxpayers don’t revolt.

Another battery advance is thin plate pure lead (TPPL). These batteries are much safer, and although they will out-perform other AGM designs, they do not have the energy density (watt-hours per pound or watt-hours per cubic foot) of lithium batteries. I have been testing TPPL batteries for about seven years. They have come down in price and are probably cost effective now because of their longer life.

In the larger picture, energy storage is the weak link in the grand designs (and grand claims) associated with both solar and wind. Somebody somewhere is probably working on that. If you look at typical losses of 30% going into a battery and another 30% going out you get .7 times .7 or a 49% loss just to go into storage and come out. That does not matter on a boat much, but the grand designs ashore come down a peg or five from this kind of loss. Thus, efficient batteries that have low losses in and out are critical (and not yet in existence). The renewable energy promise is still waiting on a good storage system. Otherwise it is a great system that works only when the sun shines and/or the wind blows. If other sources of power are needed, (see topic “spinning reserve”) there is no reason to install the renewable systems. They just add to the cost with no economic advantage. Germany is learning this the hard way.

At the moment there is not much reason for this high-tech stuff to find its way into good old boats. No financial incentive, and no great performance advantage. Other fields will lead the way. In transportation, including boats, energy density is a key component. Nothing we have now does the job.