I approve of your editorial (The Dogwatch, July 2018) because it is an educational, thought-provoking, even-handed essay. As a solo sailor whose father was knocked overboard by a boom when sailing alone, I always wear my PFD. He survived, although he was nearly dead from hypothermia when rescued by a Cape Croker (north of Meaford) indigenous family.

Hypothermia’s inexorable crippling effects, on even strong swimmers, are well worth watching. Information is a precursor to situational awareness. Cold Water Bootcamp (long version) is a 2008 Canadian-made video shot at Wiarton, in Georgian Bay, Lake Huron, in the spring shoulder season. Under police and other professional water rescue personnel supervision, a series of volunteers of various abilities, shapes and ages were observed for the time and distance covered before each individual succumbed and “went vertical.” Trying to re-board with no arm control makes interesting viewing.

One is often inclined to overestimate one’s abilities while justifying debatable judgment choices. Nature does not rationalize.

Editor’s note: regarding hypothermia,  click here to watch an excellent video by Mario Vittone called, “Hypothermia myths and the truth about cold water” 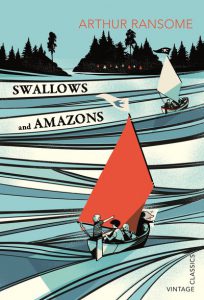 May I recommend the following to your readers still postulating over pfds: Read Swallows and Amazons by Arthur Ransome. A renowned classic of its era (perhaps a more robust time).

Written in England during WWII, Swallows and Amazons concerns the many delightful adventures of two groups of kids in the wild and windswept English Mountain Lake District. Both groups want to camp on Cat Island, small, remote, deserted and in the middle of a very large, boisterously windy lake. One group comprises two 12- and 11-year-old girls the other comprises a boy, 8; a girl, 11; and another sister, 12. Both groups of kids sail sinkable 12-foot clinker (lapstrake) wooden dinghies.

One of the children’s mothers telegrams her husband, a destroyer Captain, as she is concerned about the wisdom of such a sail and overnight camp (and no cellphones then, folks).

He replies from the bridge of a destroyer engaged with submarines in the North Sea:

“Mother. Of course children should proceed to island. If not duffers, won’t drown. If duffers, deserve to drown. Love. Father. MESSAGE ENDS.”

As an old gaffer pointed out to me years ago “Since we are an island nation, maybe we should all wear lifejackets all the time.”

Well, you can’t be too safe can you.

I have a 1978 Bristol 29.9 sailboat. It has a round, foam-like material that covers the hull/headliner joints of all the bulkheads. The material has become dried and cracked. In some areas it has just fallen off.

I suspect this is a material that is installed when the the bulkhead is installed in the hull. I do not plan to disassemble the entire boat interior, so I don’t think I could use the same material again, assuming I could find it. Is anyone aware of a good product that could be used to replace this material?

Please contact me directly and thank you in advance.

Last month we put it to the readers about boat operator licensing. Specifically, we wanted to know how folks feel about future licensing requirements we think are inevitable. Should they be restricted to powerboats, or should they also include sailboats (and I’ll extend the definition of sailboats to include those with an auxiliary that can move the vessel at speeds up to 6 knots)? For what it’s worth, this editor has sailed over 25K miles on 3 different keel boats, has never had a license, and thinks it’s difficult to argue against them. When we’re enjoying public waterways, we appreciate knowing that everyone is at least schooled in the “rules of the road.” Unfortunately, testing for proficiency and judgment is unlikely to happen and those characteristics are probably most important, so we question the ultimate value of licensing. But here’s what several of you had to say:

I think it is wholly unnecessary [to license sailors] and just one more attempt by governments to impose regulations where none are needed. Notice I said sailors, not the more generic term “boaters” used by other nautical publications. A good case could be made to force power boaters to take some course or acquire some education before they jump in their overpowered, noisy runabouts. An absolute ban on cigarette boats wouldn’t keep me awake nights. I believe all attempts to regulate our activities on the water are nothing more than the first step in turning it into a way to tax us more. After all, it seems reasonable to assume that there would be a cost for the “license,” since we are already charged to register our boats. Like everything else these days, that would increase over time.

Our local fire rescue and police boats are docked next to mine on the Delaware Bay. The officers tell me that 99 percent of their calls are for powerboat issues. Sailboaters don’t get their vessels in trouble as often owing to slow speeds. At the same time, sailboat operators also have children on board without PFDs and may drink and drive. My sense is that more training for both sail and power will increase safety and can be done in a relatively painless way. BoatUS and other organizations already have online training that would allow a boater to comply with an online training requirement in an afternoon. Time well spent and might save a life. Well worth it.

Dave, we agree with your sentiment and wish for the same outcome, and we even wrote in the last issue that arguing against licensing (and the training that would naturally be a prerequisite to receiving a license) is a very difficult proposition. We’re for it. But we don’t want to delude ourselves into thinking that training/licensing will be a cure for the most egregious boating operator ills. Driving under the influence has long been on the decline in automobiles, but this is not because of any driver training and driver licensing, it’s strictly because of a huge shift in the cultural mindset over the past few decades — and that shift was brought about by a combination of awareness raising and tougher legal/financial consequences. Unfortunately, despite tougher legal/financial consequences for operating a boat while intoxicated, the problem persists, and alcohol impairment is the primary preventable factor in boating fatalities. What’s missing is the same level of awareness raising. Spring break on Lake Havasu, anyone? –Eds.

I dropped BoatUS as an insurance company because I felt their lobbying was blindly pro-boater with no sense of balance or fairness.

I think requiring successful completion of a safety course is reasonable. I’m from New England where we do allow government to be more active than other parts of the country, but I feel this helps us protect the natural areas we enjoy, keeps us safer, and helps the most vulnerable.

I was grandfathered into Connecticut operator license requirements for the silly reason that my dad had registered our dinghy in my name when I was about 6 years old. I was given a safe boating certificate without taking a course, which makes no sense.

I later worked on a commercial boat and we really wished more of the boating public knew the rules and the meaning of our horn signals.

I don’t think there is any question sailors should be subject to the requirement. Sure it would be a powerboat’s fault if they ran down a sailboat, but if a proper watch on the sailboat could have gotten them out of the way, isn’t that a better outcome? To me, the question is whether other non-motorized vessel operators such as kayaks and stand up paddle boards should also be required or at least incentivized.

I don’t want to prevent anyone from being able to get on the water, but if states offer the online course and charge a fee that perhaps can be waived or have a sliding scale for people who don’t have much money, I think it is a completely reasonable requirement. 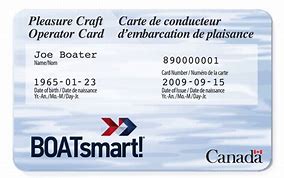 Canada requires all operators of powered watercraft, including sailboats with an auxiliary engine (even when not being used), to have a Pleasure Craft Operators Card. The card is relatively easy to get, requiring a basic knowledge of how to operate the vessel, rules of the road, and safety requirements. It’s a good idea, as it promotes more responsible and safer boat operation. Nothings perfect, but at least Canadian boaters can have some expectation that the boat headed towards them is being operated by someone who has a clue about right-of-way!

Canada’s regulation came into effect years ago. It is a one-time thing, no renewals, and must be carried when operating a vessel. A good thing? Maybe. I’ve not seen any stats published that indicate any change in the number of pleasure-craft marine accidents. Perhaps insurance companies have them.

Yes, I think licenses are a good thing to have and require for all types of boats. As a Vessel Examiner, I see too many operators who are ill-equipped to operate their boat. I think a test (preferably in owner/testee-supplied vessel) should be mandatory, perhaps renewed once every 7-10 years and grandfathered in after 25 years.

I live in Michigan, where any fool can own a powerboat, and most of them do. The licensing threshold in Michigan is going to be fairly low, given the extent of boat ownership. It seems likely that the knowledge base for elementary nautical stuff is likely higher among sailboat owners. The perceived mysteries of the art of sailing (“all those ropes!”) has a sorting effect, and it means that a low-threshold test is not really going to threaten most sailboat owners.

So no, I’ll not complain too vigorously if licensing extends to sailboats. Anybody who doesn’t know the basic right-of-way rules, navigation concepts, and safety concepts shouldn’t be sailing or roaring along at 45 mph (or should that be gph?).

Canada has required a boater license for over ten years. I believe it benefits all boaters and I believe it is not enough for operators of large boats, motor and sail. Nothing can be better than a power squadron course, or the equivalent. That’s a standard to which we should all aspire. 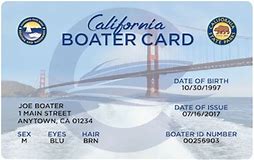 In California, some vessel operators must be licensed. It is a relatively new regulation and will roll in over the years by age. The requirement is on-line or classroom study and an exam. This regulation is the result of negotiations with interested parties, including boating advocacy organizations, to achieve the least onerous requirement. In other words, it was going to happen, so working to shape it was a necessary tactic.

Yes! All boaters should prove at least a basic knowledge of the rules of the road, so to speak. These requirements, such as for the Pleasure Craft Operator’s Card in Canada, are not difficult and demand only a basic knowledge of the rules. It doesn’t take much time and, although Darwin might eliminate some of the know-nothings out there, I prefer they be eliminated before they hit me.

We have owned sail and power boats, and I think sailboat operators should be included in licensing requirements. According to the regulations, a sailboat under power is a powerboat and must obey the same rules as a powerboat, so sailors need to know the rules. Besides, the license tests include many other safety issues that are generic.

The test should be easy for most sailors, who are generally more knowledgeable than powerboaters. Washington State has had a boater’s license for years, and I think Canada does also.

Course cost for the Canadian operator’s card is $40cdn online and there are a wide variety of providers. It takes about 2-3 hours to acquire. Should an operator be stopped while on the water and found not to have a licensee (in addition to all the required safety equipment), the fine is $250.