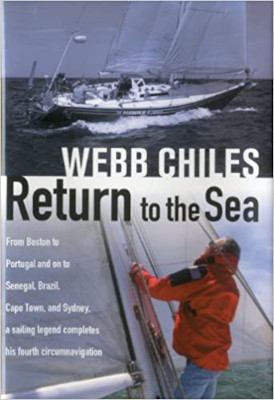 “…I walked the bow back until, when the shrouds were even with the end of the side tie, I stepped aboard. Nothing held to the country in which I was born almost 60 years earlier. I did not know that I would ever see it again.

With that, Webb Chiles departs Boston to complete his fourth circumnavigation.

Return to the Sea is a personal narrative of the completion of Webb’s fourth circumnavigation. And it is a very good one. It has no aspirations of being a cruising guide. As you read, you go where Webb’s mind and boat go.

The first part of the book is a brief introduction to the man and his travels: his wives and boats. He describes sailing around Cape Horn single-handed as the first American to do this. He describes his boat sinking off eastern Florida and how he acquires his next boat, The Hawke of Tuonela, and his next wife, Carol.

The reader sees a little bit of Webb’s internal turmoil when Carol joins him during his journey and becomes a part-time cruiser.

Webb is engrossing as he describes his visits to various ports along the way back to Sydney: the Azores, Portugal, and Gibraltar. He includes vivid accounts of places off the beaten path: the goats in Dakar, Senegal; Christmas in Salvador, Brazil; the luxurious Blue Train that travels between Cape Town and Pretoria, South Africa.

As Webb crosses the North Atlantic to Portugal, the reader gets a glimpse of life aboard during ocean passages. Then he crosses the Southern Atlantic to Brazil and on to South Africa. Then there are five weeks traveling the last ocean from the Cape of Good Hope to Australia.

My one issue was that the end of his trip was lightly discussed. I would have preferred more. This book should be on the short reading list for every sailor who dreams of leaving. If leaving is not in you retirement plans, but living vicariously through others is, this book should be very entertaining. But be careful, the byproduct of reading this book could cause you to update that five-year plan to take off. I have.