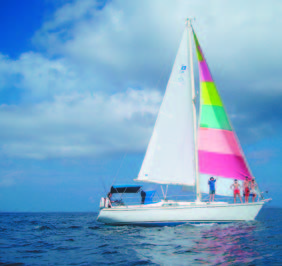 This 1970s family cruiser offers a fair turn of speed 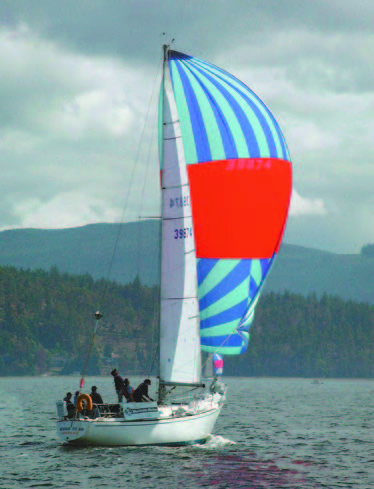 Pearson Yachts was one of the most respected builders during its long run from 1956 to 1988 or thereabouts (under ownership by an investment firm, the end was protracted and sloppy). Founded in 1956 by cousins Clint and Everett Pearson, the company’s early auxiliary sailboats were designed by a who’s who of naval architects: Phil Rhodes, John Alden, Bill Tripp, and Carl Alberg. But it was Bill Shaw, who came aboard in 1964, who designed most of the models for the company. Grumman Aircraft Engineering Corp. bought the company in 1960, and the decision was later made to bring design in-house.

Bill Shaw was a graduate of the U.S. Maritime Academy at King’s Point and a student at the Westlawn School of Yacht Design. Afterward, he worked 11 years for the prestigious firm of Sparkman & Stephens, where chief designer Al Mason gave him a key role in the development of the Nevins 40 (1954) and the Tartan 27 (1960). His move to Pearson Yachts in 1964 was the beginning of a long relationship.

Bill thrived in Grumman’s corporate environment, becoming both general manager and chief designer. His first boats were the Coaster and Wanderer (1966) and the Renegade (1967), the first Pearson with the rudder detached from the keel. Our review boat, the Pearson 36, came along five years later. It was in production from 1972 to 1976, numbering 103 units. The base price in 1975 was $29,500.

In Bill’s words, “The boat was designed as a performance-oriented cruiser also designed for the race course” in what he described (in those days) as “a world of beamy cruisers and pipe-berth ‘tonners’ ” that left buyers with the choice of going slow comfortably or less slow uncomfortably. 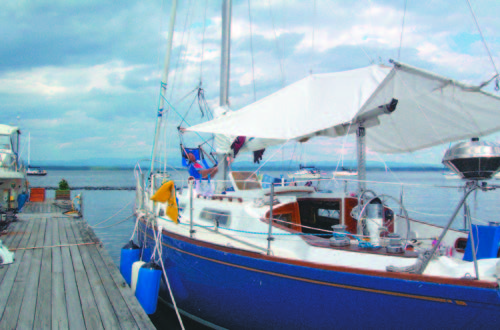 The result is a fast 36-footer that provides crew with comfortable accommodations in the cockpit and down below. The design features a high-aspect-ratio masthead rig that represents the shift from the CCA rule to the IOR era. A tall-rig version was available.

The overhangs are moderate, with a raked stem and fairly broad (by IOR standards) counter transom. Also typical of the IOR are narrow ends. The resulting lack of deck space at the bow is an inconvenience for those using these boats as cruisers.

The hull is nicely proportioned with an overall length of 36 feet 6¾ inches This 1970s family cruiser offers a fair turn of speed by Ed Lawrence Boat review Pearson 36 and a waterline length of 29 feet 2 inches. Sail area is 601 square feet, with only 260 square feet in the mainsail, meaning that large headsails will require some effort if they are to be trimmed tight in a stiff breeze. The sail-area-to-displacement ratio of 17 and the displacement-towaterline- length ratio of 243 are about right for a cruiser with better-than-average performance. (Note: These numbers may have varied a bit over time, of course, but those were the original specifications. –Eds.)

So, while Bill Shaw paid his respects to the IOR, the 36 was more of a dual-purpose family boat. That was, in fact, the overall design philosophy of Pearson Yachts throughout its history.

The hull is solid fiberglass with integrally bonded bulkheads and the deck is cored with end-grain balsa. Water tanks are made of fiberglass, the fuel tank is fashioned from Monel. The external ballast is lead, and the rudder is hung on a skeg.

I’d been aboard for at least 11 seconds when I noticed that the wheel is located far forward in the cockpit, a big difference from most boats. It was a welcome sight.

Most wheels are located well aft to enhance crew comfort (such as protection under the dodger), allowing the crew to work winches forward in the cockpit, and relegating the helmsman to a seat at the stern. On many boats, the mainsheet traveler is mounted on the bridge deck, so it is more or less out of the way as well. But this arrangement results in mid-boom sheeting which requires a heavier boom.

On the Pearson 36, the boom is only 12 feet 10 inches, so the mainsheet is attached to the end of the boom. The result: a mainsheet and traveler that can be managed from the helm position. It’s great for singlehanding. And whenever there is crew, the jib and spinnaker trimmers are aft, out of the helmsman’s way, an important consideration when changing course or jibing a spinnaker. A minor downside is that the mainsheet, when on centerline, interferes with companionway access.

While underway during our test sail, the cockpit proved to be large enough for six adults and a child. One can relax against the high-sided coamings and stretch out comfortably. Our review boat has old-fashioned cockpit lockers in which loads of sails and gear can be stowed. In the original manufacturer’s configuration, however, the quarter berth housing took up a lot of the starboard locker. 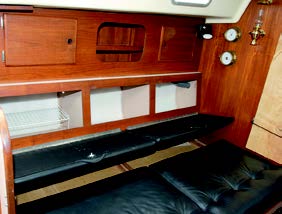 The 36’s interior is well-organized and nicely appointed. Heading below is as simple as stepping onto the top companionway step, which measures 20 by 18 inches. That dimension is noteworthy because it provides a convenient perch on which the night watch can scan the horizon without getting too wet or cold. What’s more, this step can be raised to gain access to the top of the engine.

The 11-foot 1-inch beam produces a wealth of space belowdecks coupled with the 6-foot 4-inch headroom. The saloon measures 9 feet on centerline, allowing two people to stand shoulder to- shoulder without feeling as if they’re packed in on a crowded subway ride. The galley and a settee are to starboard; to port is a nav station and second settee.

On our review boat, the table folds out of the way on the bulkhead, freeing space and allowing the settees to slide out and convert to berths. Both berths are more than 6 feet long. A pilot berth to starboard will be popular on a long passage, since sleeping amidships is like being on the pivot point of a teeter-totter. On this boat, its opposite space to port is occupied by a bookshelf and two cabinets. Some Pearson 36s have an additional pilot berth to port. 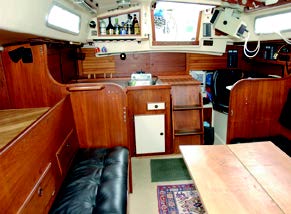 The large area devoted to the saloon unfortunately subtracts space from the forward cabin. The V-berth is long enough and wide enough for a couple, but with the door is closed there’s precious little room for dressing.

The L-shaped galley in our review boat is fitted with an Adler-Barbour 12-volt ColdMachine refrigerator and two-burner Optimus stove/oven. However, Bill Shaw sneakily threw a curveball when he placed a cupboard door under the sink, giving the impression of accessible storage space there. In fact, the door provides access to the fuel and water filters on the starboard side of the engine, though only a gnome will be comfortable working on that side of the engine.

The 11-foot beam makes for a spacious saloon with pull-out settee, a large table, and pilot berth to starboard centrally located for sleeping when the boat is underway. The settee berths are more than 6 feet long. The table folds up against the main bulkhead. The galley is aft in the starboard quarter. The top companionway step makes a good seat for keeping watch on a cold night.

Also of note is the wet locker to port of the companionway. Although small, it is vented to the engine compartment so wet things will dry.

The head is a small compartment crammed with a toilet, a vanity with a small sink, and a shower.

The first thing I noticed during a test sail on Puget Sound was that the Pearson 36 motors at 7 knots with the diesel turning at 1,800 rpm — pretty snappy performance. Theoretical hull speed is 7.29 knots. The original engine was a 30-hp gasoline Atomic 4.

With a full-battened mainsail and an aging genoa, our test boat sailed to weather in 9 to 11 knots of breeze making 6.5 to 7.6 knots, impressive performance for a cruising sailboat. She covered the bottom at about the same speed when we eased sheets and sailed on a broad reach. She’s a tad on the tender side, but once heeled to 20 degrees she buried her shoulder and forged ahead.

Replacing the three-bladed prop with a folding prop should add at least half a knot.

The Pearson 36 carries a PHRF rating of between 135 and 158, depending on the fleet. Rating for the largest fleet, on Narragansett Bay, is 141. For comparison, a Ranger One Ton and an Irwin Competition 37 of the same year rate 120 and 123 respectively.

When shopping for a Pearson 36, be advised that Pearson built a number of 36-foot sailboats before it disappeared from the scene. The first of the 36s is very different from those that followed. The original 36s were built between 1972 and 1976. The next boat, the Pearson 36-2, was in production from 1985 to 1990. (This one is shown on the cover.) Other variants, all designed by Bill Shaw over the years, are the popular Pearson 365 (a ketch), the Person 367 (a cutter), and the Pearson 36 Pilot House. All of these 36-footers are well-loved and actively sought after sailboats.

What I can say for certain is that the Pearson 36 is a well-built, moderate interpretation of the IOR that still looks good and sails well today.