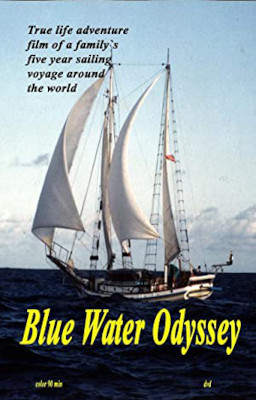 Blue Water Odyssey is a top-notch “home movie,” in which the viewer is invited to share the adventure of a family’s five-year sailing voyage around the world. A wooden gaff-rigged Sea Witch ketch, 36 feet on deck with a 13 foot beam, certainly qualifies as a good old boat. She carried this family of five from San Diego, California, across the Pacific to Hawaii, touching some islands off the beaten track in the South Pacific, then down to Australia. They passed to the Indian Ocean via the Torres Strait, then to South Africa and around the Cape of Good Hope. They crossed the Atlantic to the Caribbean, stopping at St. Helena, some islands near Brazil, then through the Panama Canal and home.

From their mention of the Gilbert Islands’ becoming independent, the voyage must have taken place some time in the 1970s. Therefore, as a travelogue, it may well be outdated. However, the portrayal of exotic native ceremonies and practices is interesting and informative.

There are some beautiful scenes and fun family times at sea and at anchor, well photographed but poorly edited. The music, which is original, seems to dictate the length of the scenes, rather than being used as background to enhance the mood. Consequently, most scenes run on too long and this viewer’s interest soon waned. Compounding this is the uninspired narration. Since it has apparently been transcribed from the original film to a digital format, there are some technical film glitches and the quality of the color is inconsistent.

Compared to most home movies, however, this one has some excellent amateur cinematography and interesting scenes that — with some judicious editing, improved narration, and background music — could be of interest to cruising clubs or armchair cruisers. As it stands, it is sure to be a treasured record of this family’s unique adventure for generations to come.