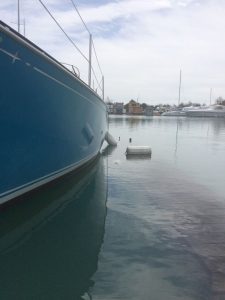 Heard about all the high-water flooding affecting the Heartland? Reader Robert Mackay sails out of the Highland Yacht Club in Toronto, Ontario, where they’ve got plenty of water too. Apparently, no sailors are happy about this and there is no word on when the water will recede. As if they don’t already have a short sailing season, eh? In the photo below, that’s a dock on the port side of this sailboat.

If you’ve lived long enough, you’ve learned or realized that most of the well-worn expressions in English originate from the worlds of either Shakespeare or sailing. At least that was our understanding.

Cold enough to freeze the balls off a brass monkey. 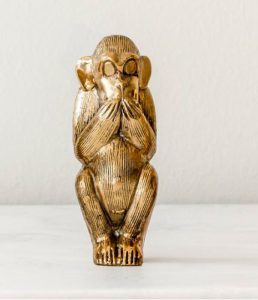 We thought we knew that this expression was from the world of sailing (definitely not Shakespeare). The monkey was a ring or tray on which cannonballs were stacked in a pyramid next to a cannon, aboard a ship; the monkey kept them from rolling away. The monkey was made of brass so that it didn’t rust sitting on the damp wood deck. But brass contracts rapidly in the cold, more so than iron cannonballs, and thus, when cold enough to freeze, off the brass monkey the cannonballs would roll.

According to grammar-monster.com, this theory is discredited by the US Department of the Navy and the etymologist Michael Quinion and the OED’s AskOxford website:

There you have it, makes sense to us. Now you’re smarter than when you started reading The Dogwatch. 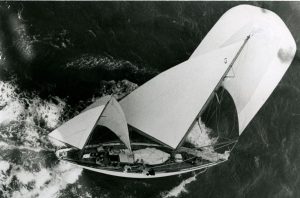 Dorade racing in the 1936 Transpac

In mid-July, the 50th running of the Transpacific Yacht Race (commonly known as the Transpac) will kick off from Long Beach, California, and finish in Honolulu, Hawaii. Here is an excerpt of the fascinating origins of this race that started in 1906:

“The originator of Transpacific Yacht racing, the late Clarence MacFarlane of Honolulu, corresponded with yachtsmen of San Francisco and Los Angeles prior to 1906 and succeeded in interesting several mainland yachtsmen in a race to Honolulu. On April 14, 1906, he sailed his 48-foot schooner, La Paloma, from Honolulu to San Francisco to join them in a race back to Waikiki. However, he arrived 27 days after the “Great Earthquake” to find the idea of a race from the Golden Gate out of the question. At the suggestion of H.H. Sinclair, he sailed to Los Angeles to join the Lurline and the Anemone for the first Honolulu Race which started from San Pedro on June 11, 1906. Since that memorable date, there have been 44 Honolulu Races; of these, 39 have started from San Pedro, two from Santa Barbara, and one from Balboa, San Francisco, and Santa Monica. This biennial race has proved to be one of the most popular sailing events in the world.” 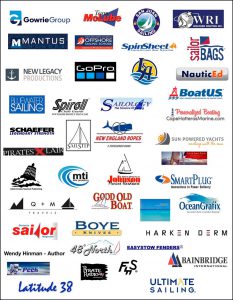 Good Old Boat is a Summer Sailstice sponsor! Can you find our logo? Click for a larger image.

Summer Sailstice! June 22, 2019: it’s the global celebration of sailing. Founded in 2001 by Latitude 38 publisher John Arndt, Summer Sailstice is a free sailing event held every year on the weekend closest to summer solstice. Nearly 19,000 sailors signed up and participated last year and the mission of the event is: “Host a spectacular weekend uniting and bonding a critical mass of sailors worldwide in a common, publicly visible, inspiring event to demonstrate and celebrate sailing resulting in a significant, positive impact on participation. And, like sailing, have fun doing it!”

And there are contests too. It’s worth learning more at summersailstice.com 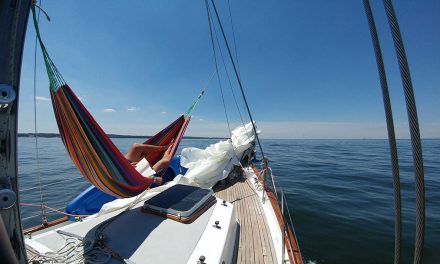