Tim J. Dull, Vice Commodore of the Tartan 34 Classic Association (http://tartan34classic.org/) let us know that this year marks the 50th anniversary of the Tartan 34, S&S design 1904. The sloop version was released to production on April 28 1967 and the yawl on October 11 of the same year. Wow.

To mark this milestone, the association is holding a celebration at the U.S. Sailboat Show at Annapolis this year, October 5. The group will meet at the Port Annapolis Marina, at the Overlook Pavilion. To join the celebration, visit the group’s website for registration info. The National Sailing Hall of Fame (www.nshof.org) recently announced eight new inductees that comprise the class of 2017. I’ll note that anyone who ever learned to sail in the venerable Optimist should celebrate Clark Mills inclusion, and many O’Day owners and sailors owe a tip of the hat to inductee Ray Hunt, who penned a great number of those designs, among others.

Yacht designer Doug Peterson passed away in San Diego of colon cancer on June 26 at age 71.

I was aware of the boats that bore his name, the Kelly-Peterson 44 and Peterson 46 being the two I’m most familiar with. But I’ve since learned that Peterson designed two Americas Cup winners. That he was a Southern California native who had trouble in school for his inability to stop drawing boats. As a long-haired, bearded college dropout, Peterson apprenticed with designer Wendell Calkins before borrowing money from his grandmother to build his own 34-foot design. That boat was Ganbare and put Peterson on the world stage after she won the 1973 One Ton World Championships in Genoa, Italy.

Peterson’s work is reflected in more than the good old boats that bear his name. He also drew boats for Islander, Baltic, Hans Christian, Jeanneau, Tartan, and Bavaria.

Navtec, the sailboat rigging company known to many for its Norseman brand of swageless (or mechanical) rigging terminals and based in Guilford, Connecticut, has closed shop. Hayn, a competitor in the standing rigging market and known for its Hi-Mod brand of swageless fittings, bought Navtec’s intellectual property assets at an auction in April. According to an excellent account in the July/Augusts issue of Ocean Navigator, Hayn’s General Manager, Brett Hasbrouck, said that Hayn’s plan for this acquisition is to “fill in the holes in our product offering to make it more complete…We will also be expanding to areas that Hayn did not offer. At some point in the future we will be offering a carbon rigging product.”

Navtec’s closure comes on the heels of another rigging manufacturer going out of business. Hall Spars & Rigging made custom and high-end spars for sailboat manufacturers and went into receivership in January. Ocean Navigator wondered whether these shut-downs are an indicator of the health of the industry. Thom Dammrich of the National Marine Manufacturers Association (NMMA) cited data that suggests the industry is healthier than it’s been in recent years. He said that these two companies derived a lot of business from the high-end market and the strong dollar has made that business difficult to sustain in the U.S. Charlie Nobles, Executive Director of the American Sailing Association was reported in Ocean Navigator as saying he believes the sailing industry has stabilized after some tough years. He said his organization is training as many new sailors as they ever have.

There are still old knots that are unrecorded, and so long as there are new
purposes for rope, there will always be new knots to discover. – Clifford W. Ashley

The New Bedford Whaling Museum celebrates the work of the master knot maker, maritime artist, historian, and author Clifford W. Ashley in a monumental exhibition opening in one of the Museum’s most prestigious galleries. The exhibition includes the premiere of a recent gift to the Museum of Ashley’s private knot collection with interpretative material from the Museum’s private collection as well as the artist’s paintings, prints, and works by other knot experts and artists inspired by his work.

The exhibition runs through June 2018 and more info is available at: www.whalingmuseum.org/ Watch a first-time sailor on the trip of a lifetime, a sailing journey from New Zealand throughout the South Pacific. Ellis Emmett is a lifelong adventurer and his story is captured in the documentary, Over the Horizon. The first episode of the series was July 11 (with a new episode airing weekly thereafter). Outside TV Features is a new channel full of adventure-oriented programming, both shorts and features. Download their free app to watch anytime on your iOS or Android device, or watch on your TV via Apple TV, Roku, or Amazon. Check out the preview on YouTube: www.youtube.com/watch?v=AOp40zb_bQ4 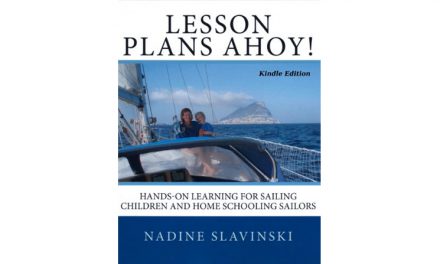 Cast Off for Catalina: Book Review