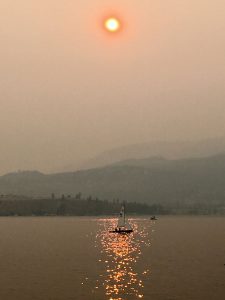 Forest fires raged around Kelowna, British Columbia, last year and during that time, Paul Skene captured this smoke-on-the-water-effect shot of a lone sailboat on Okanagan Lake.

THUMBS DOWN FOR PFD PERSPECTIVE

I just have to comment on the most recent The Dogwatch Mail Buoy conversation about pictures of kids without PFDs (“Thumbs Up For Depicted PFD Use,” March 2019). I found the editorial response to Rob Hill’s letter quite unsettling, particularly these comments:

“While we know that SOME kids (and adults) should be in life vests 100 percent of the time in SOME situations…”  (my emphasis added), and,

“We’re happy to promote the wearing of PFDs (for kids and adults), but there are situations where a kid is okay not wearing a PFD aboard.”

Surely you are aware that most states in the US have laws REQUIRING minors (under a certain age) to wear PFD’s AT ALL TIMES when a boat is underway. For example, as of 2005 the state of Minnesota “requires a life jacket to be worn by children less than 10 years of age when aboard watercraft in Minnesota when the craft is under way (not tied up at a dock or permanent mooring).” And for the few states that do not have such a law, a federal U.S. Coast Guard (USCG) interim rule states that, “all children under the age of 13 who are on boats that are moving, must wear a USCG-approved personal flotation device (PFD) that correctly fits them.”

Given this, your statement that “there are situations where a kid is okay not wearing a PFD aboard,” is simply false and dangerously misleading, given that the captain of the vessel is breaking the law and can be stopped and penalized if that kid is of an age that requires PFD use, and will be found negligent is something were to happen to that kid.

I find it hard to understand how Good Old Boat can take the position that this is somehow a matter of personal preference to be ignored. These are laws, with penalties, and are designed for the express reason of saving lives. They are no different than the various other laws that we all must live by, as part of our society, be it on the water or on land. You may not agree with these laws, but it is unconscionable for a respected boating periodical to suggest that boaters can pick and choose which laws they feel like obeying.

I strongly urge you to reconsider and revise your public position on this. Good Old Boat has a responsibility to its readers and the boating community, and quite frankly we expect better of you

Hi Brad, your comments are welcome and we appreciate you taking the time to weigh in. Just to catch readers up before we respond to you.

Reader Rob Hill wrote in last month to congratulate us on featuring two photos in the February issue of The Dogwatch that showed kids wearing PFDs. We let Rob know that this wasn’t by design, just coincidence. We said the things Brad printed in his letter above, then closed with, “We would balk at publishing a photo of a kid who appeared to be recklessly unprotected, but we’re not going to say “no photos of kids not wearing PFDs.”

Okay, back to your letter, Brad.

We have a very different perspective than you, likely because of our lifestyle. Until late last year, we lived aboard a 1978 Fuji 40 with our two daughters. From ages 5 through 15, the boat was their home.

We can’t recall an overnight passage on which we made our girls wear a PFD while asleep in their bunks (or even just hanging out down below). If you sailed 26 days and nights from Mexico to the Marquesas, would you have your kid — even if an infant — in a PFD for the duration, or would you apply rules for wear based on sailing conditions and location on board?

Really think about that. You’ve been aboard and out of sight of land for 17 days already. It’s a gorgeous night under the stars and you’re running under light, warm trades. You’re in the cockpit on watch wearing a PFD and tether, but your 11-year-old child is down below asleep in her cabin. Would you require her to wear a PFD while asleep? Law or no law?

Our girls loved to rush up to the bow when someone called “Dolphins!” But they would never have left the cockpit to go forward before either donning their PFDs or asking whether conditions were right to go without them. And, sometimes conditions were just fine for going forward without (such as, motoring on a glassy Sea of Cortez with not another boat in sight, both of us focused on the girls at the bow pulpit, air and water temperature are both 88 degrees, both girls strong swimmers and comfortable aboard this deck that has been their home for years . . .)

You wrote, “…it is unconscionable for a respected boating periodical to suggest that boaters can pick and choose which laws they feel like obeying.” Laws that govern PFD use have value, including in raising awareness about the importance of kid safety around water. But laws have limitations and more important and relevant, in our view, is parents evaluating all the factors at play and doing what is necessary to keep kids safe around the water.

We personally know of one child who tragically drowned. She was five years old and she was not wearing a PFD and the law did not require her to have one on. Her parents’ boat (the girl’s home) was tied up in a slip. While they thought she was sleeping in her berth at night, she left the boat and got onto the dock, and fell in. This happened four years ago this month, and it remains a heartbreaking reminder to all of us who parent aboard of what can happen.

We’re not trying to go out of our way to make a case for keeping kids out of PFDs, just trying to relate the reality of our lives and perspective. If we were weekend sailors who sailed a chartered 30-foot sailboat out of Marina del Rey, California, with our 5-year-old kids aboard, we imagine we’d always have them in PFDs. The water being cold, the kids not being strong swimmers, and the boat not being so familiar, are the big factors we’d weigh. But would we publish a photo of a 14-year-old at the helm of her parents’ boat under way, in conditions that appeared reasonable? Sure.  –Eds. 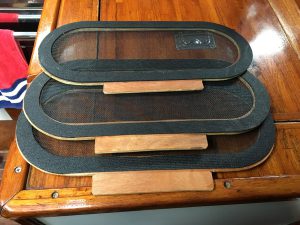 In “Screen Testing,” (Good Old Boat, March 2019), writer and sailor Jim Shell shared some great ideas for screening portlights. Now, one of his ideas has come to life, and he sent photos to prove it.  –Eds. 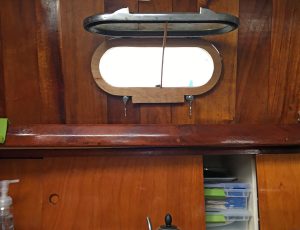 I took these pictures of the portlight screens Danny made for his Westsail 32 over the winter. He made professional-looking screens with rubber tool-tray material on the bezel-face side of the frame. I am going to make a couple of these for Phantom. These will be prettier and easier to deploy than the shower-cap screen.

Last month I put it to the readers about food. I’ve always known that whether I’m eating an apple, Cheetos, or homemade lasagna, it will taste better aboard. And being a saltwater sailor, I always reasoned that it was the salt air that made this true. But freshwater sailor Karen Larson challenged my assumption when she made it known that food also tastes better when aboard a boat sailing on the Great Lakes. So I asked you to give me your take.

Reader Floyd Jamison likes Cheetos and beer so, of course, he gets the first word…–Eds.

I thought Cheetos were a separate food group. They go great with beer. Yes, food always tastes better afloat, whether it’s at Sea (salt water), on the Great Lakes or any other body of water. Has nothing to do with the air but everything to do with your psychological and physiological state. Being afloat allows you to put most of your worries away, open your mind to the world around you, and to honestly relax. Then everything comes alive, including your taste buds. Well, unless you have a gnarly Nor’easter bearing down on you, then it might be just a tad tenser.

I’m reading Wallace J. Nichols’ Blue Mind: How Water Makes You Happier, More Connected, and Better at What You Do, and I’m in agreement that whether lake, river, or ocean, it’s our intimate proximity to a water feature that sharpens the taste buds and appetite. Plus, all the muscles constantly adjusting to the motion of the boat, kayak, or canoe justifies an extra helping! I’ll add that while I think salt air does contribute a bit more to this effect, I would never go against Karen as she’s got the time in to garner my respect!

Food tastes better on board, but I think it has nothing to do with the water, whether salt or fresh. I think it has to do with two things: being outside and having fun. I’ve noticed that food tastes great no matter what I’m doing, so long as those two factors are in play. I can be on the beach, or skiing, or sailing, or hiking, and all those things make whatever food is available taste great.

Of course, now that we’re entering mud season in Massachusetts, it’s too late to ski and too early to sail. So, I guess I’ll just have to resign myself to bland food for a little while!

Sailing is an altered state of awareness, so everything is better on board a sailboat. Including food. And beer. 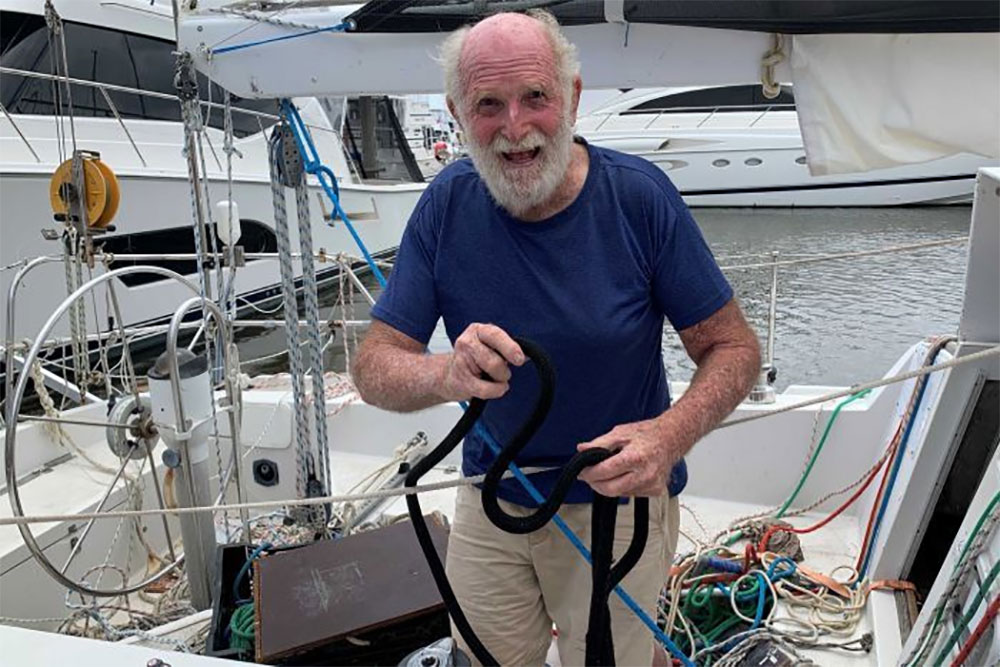