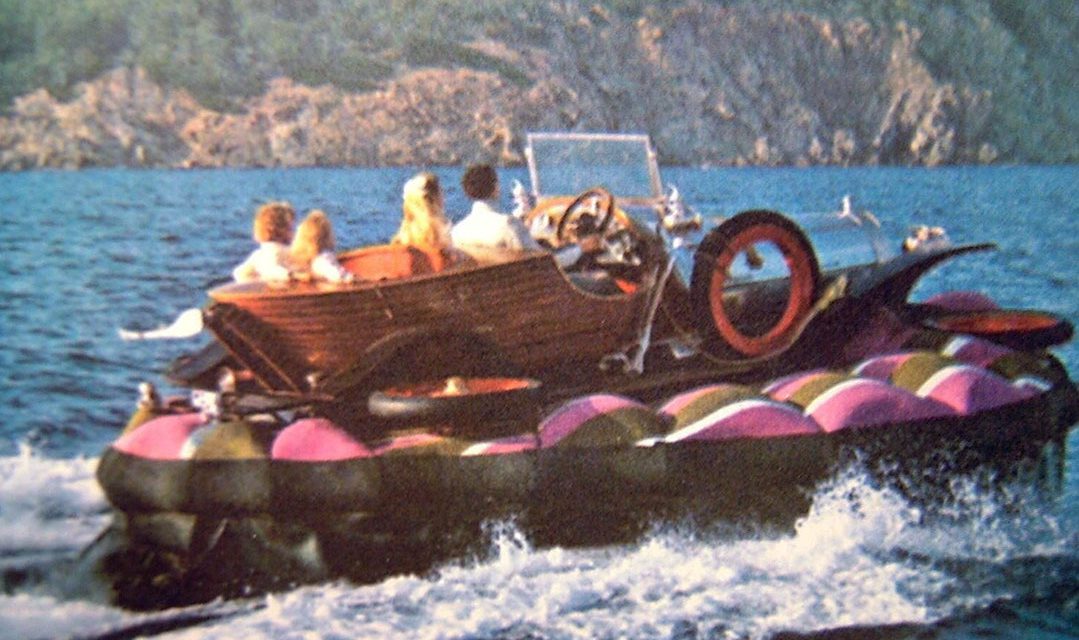 I enjoyed Ronald Sundelin’s article “A Very Early Fiberglass Cat” (The Dogwatch, June 2020). It reminded me of my first boating adventure, for which I used a couple of old 40-gallon water-heater tanks to make a small cat. With a simple steel structure for a “trampoline” and oars for power, I rowed it around and fished from it on our farm pond for several youthful years.

My first boat, a 1950’s project, was a small steel-hulled craft. Starting with a single 55-gallon drum, some careful cutting, and some very careful folding of the cut panels to connect to port and starboard floats, I produced a good, but not very good, boat. The nifty bow we created worked; she didn’t sink.

My next boat, that I built when I was 16, was lighter and unsinkable. To achieve the latter goal, I sealed off an entire section of the hull, forward of a bulkhead. With an 18-horsepower outboard on the back (the boat didn’t warrant anything bigger than 10-horsepower) it rose up onto the outboard motor’s planning fins, flying over the water—wow! And when it flipped, we never had to dive for our borrowed outboard; I’ve been a fan of hull flotation since.

And it was these boats that set me on a course for a lifetime of sailing, a lifetime during which I have enjoyed myself thoroughly.

Captain Don, I can’t decide whether your letter was inspired by “A Very Early Fiberglass Cat” or my “Put It to the Readers” question. No matter, we dive into those responses next. –Eds. 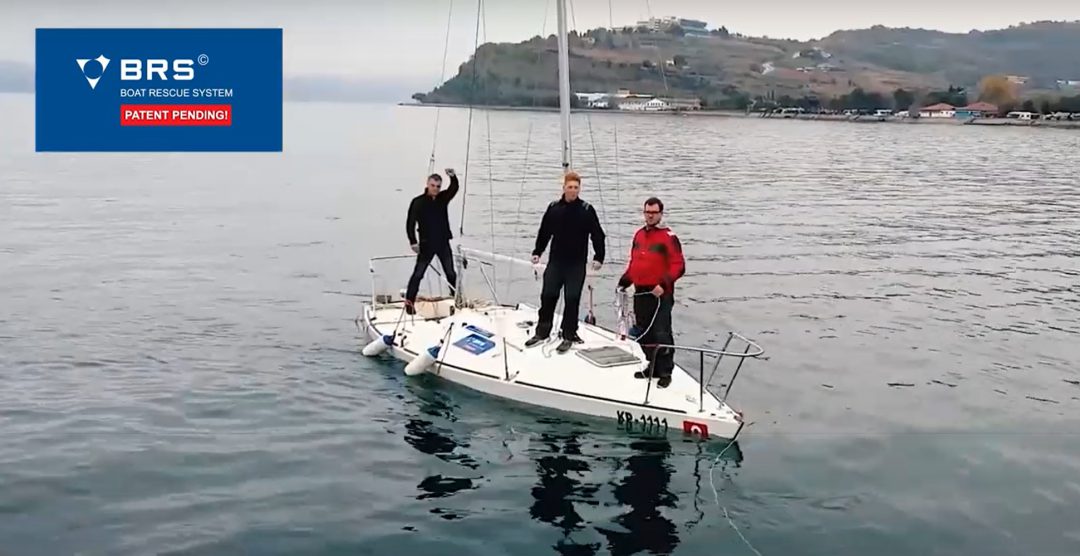 I’m going to give Steve Laydon the first word, just because…

I love that BRS has created this product! I came up with the idea myself years ago and was shocked and surprised that no one had invented and commercialized it first. It seems like a no-brainer to me. Stay with the boat and all your provisions rather than getting blown randomly around some large body of water with limited supplies. You probably still want the liferaft, for weather protection, but tether it to your swamped mothership. In some scenarios, it might even allow a crew to make repairs and salvage the boat instead of scuttling it and littering the seafloor. And how often does a life raft not inflate fully or perform as needed when needed? I don’t like the idea of putting all my eggs in that one floating basket.

I’d love to see more info on the product in Good Old Boat.

BRS is a great idea which should be incorporated, especially with the ever-increasing likelihood of hitting floating debris.

Regarding the Boat Recovery System, I’ve always had another idea about keeping a boat afloat after flooding. Why don’t manufacturers make a fin keel that can be quick-released, so the hull can be made buoyant with just a few compartments sealed or ridged foam plastic added to void spaces? Using the mechanical advantage of levers, a simple pin, and trigger wouldn’t be too difficult to design so that would be solid until released, and easy to release.

Jim, we’re with you on the feasibility of rigging a quick-release keel, we agree it can be done. But—and we hate to be a spoil-sport—if a sailor jettisons a keel, they’ll indeed get a hull that’s more buoyant, but unless the mast is simultaneously jettisoned, that hull is soon going to roll over in a bid to make the mast the new keel. –Eds.

As a sailor, I have been kicking around this concept for years, since becoming involved in inflatable bladder manufacturing. I believe it’s a concept long overdue, not only for new boats but for older boats. I have always been against letting boats flounder and eventually sink, first they’re a hazard to navigation and then a hazard to the environment. With many emergency responders now directed to address only threats to human lives, not property, it is a good time to have a means to prevent boats from becoming a total loss. With such a system installed, salvage costs and insurance premiums should both decrease. Damages from storms should also decrease, to an extent.

To address your question concerning life raft or buoyancy system, why not have both? Staying with a floating vessel is often safer than casting yourself out to open sea in a rubber boat.

Mark, you can’t have both because we said, hypothetically, that you cannot. Them’s the rules. But it sounds like you made your case for emergency bladder equipment over a raft. –Eds. 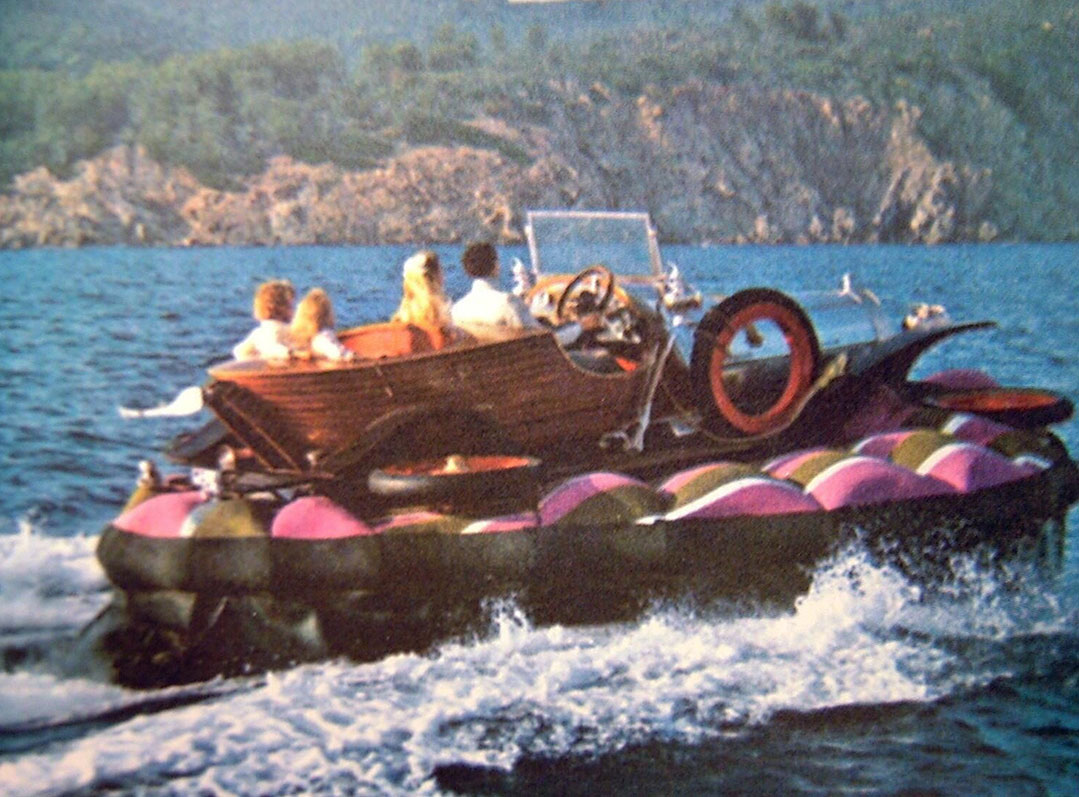 It is a good idea to incorporate a BRS-like system in new designs as well as in retrofits. In doing so, you may want to contact Caractacus Pott about the system he developed.

John, admittedly the name Caractacus Pott didn’t ring any bells for us. Now we’ve got it, and we learned some things along the way. Who knew that Ian Fleming (the James Bond creator) was the author of Chitty Chitty Bang Bang? Who knew that Roald Dahl wrote that screenplay? Not us. Thanks. –Eds.

There was a product called, as I recall, Yacht-Saver. It was intended to be installed below decks and had inflation bottles. The system was sized to the boat. There was a portable version for small boats. Unfortunately, the company was only in business a few years. Among my fleet, I have a 21-foot Dovekie. While it floats when swamped, she doesn’t float high enough to bail her out. A portable system would be ideal.

Donna Lange used an inflatable bladder rather than a life raft on her recent circumnavigation. I’ve always thought it was a better mouse trap. The boat would be much easier to see and you might be able to get to some food and supplies.

Good to hear from you, Gino. One of Donna’s sponsors is Subsalve, a maker of lifting bags, used to raise sunken things. From what we can tell, this is the company that bought whatever was left of Yacht-Saver when they went out of business. So, our guess—and it’s strictly a guess—is that Donna had a Yacht-Saver system aboard and they were thus a sponsor, and now that transfers directly to Subsalve. –Eds.

My boat, a Nonsuch 36, has a Yacht-Saver system with four bladders and an air tank, both forward and aft. The four forward bladders are about 3 feet long and connected to an octopus at the top of the tank, which is about 3 feet tall and are stored in the forward closet. The aft bladders are the same and stored on a shelf in the starboard lazarette; they’re connected to a separate tank. As you can imagine they have never been used. It came with the boat when I bought it in 2004. It may be the only one the company sold.

You should at least reveal that this has been done commercially before. Extensively advertised. If I recall/remember correctly, it worked fine but was withdrawn from the market due to potential liability issues (insurance).

Looks like it’s been revealed; must be Yacht-Saver. —Eds.

In reference to your story about flotation bags inside a sailboat, do a little research on an old company called Yacht-Saver.

What I see in the future are boat hulls modified such that a bladder may be stowed/mounted on both port and starboard sides—in a streamlined encapsulation above the waterline—so that in an emergency they can be inflated automatically. This approach would leave the interior space open to give the sailor a chance to repair the damage to the hull and then pump out the water.

We’re with you. Seems like a plausible future scenario. —Eds.

Are you aware of ETAP sailboats, made in Belgium? They are made with sufficient foam between the hull and hull liner, and between the deck and deck liner, to maintain a couple of feet of freeboard when flooded. Another benefit is the excellent sound/heat insulation offered by the foam. The only downside is a loss of interior volume, and perhaps more modest ballast.

Keep the boat afloat. ETAP sailboats has foam injection that not only keeps the boat floating, but allows the boat to be sailed home. 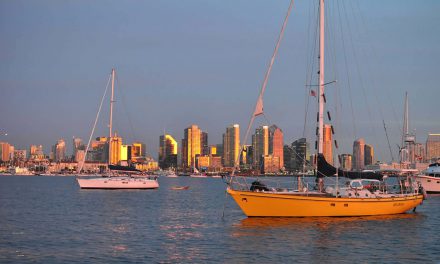