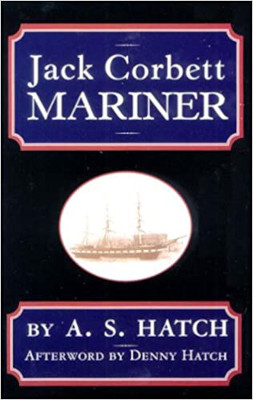 Have you ever wondered what life on a square-rigger was like . . . not as Horatio Hornblower, but as a sickly apprentice seaman crossing the Atlantic on your first voyage? How would you stand up to the cramped quarters and sail changes in all weather? Would you know how to “slush” when ordered?

Jack Corbett: Mariner can open your eyes to the seaman’s life in the mid 1800’s. In 1849, at the age of 20, Alfrederic Smith Hatch, went to sea in the hope of finding a cure for asthma. He met an old Irish seaman who took him under his wing and taught him to be a sailor. Jack Corbett would help this boy survive his first passage to England and back. Hatch, in return, opens Corbett’s eyes to the idea that life ashore is more than spending your wages on “women and drink.”

Hatch and Corbett make just one voyage together. The narrative of this voyage forms the centerpiece of the book. But there is more to the story than one voyage. Hatch leaves the sea and over the next 30 years becomes one of the movers and shakers on Wall Street. In time, he becomes president of the New York Stock Exchange. He has a wife and 11 children. Enter a much older Jack Corbett.

Hatch convinces Corbett to look after his children as he once looked after Hatch. Corbett will be an eccentric part of the family until his death. In his later years, Hatch was a principle figure in establishing havens for old sailors and those who were down on their luck. These early “shelters” were the models for many of the rescue missions that are still with us today. The New York City Rescue Mission was co-founded by Hatch in 1872. This same mission is still operating today and provided much relief to victims of the 9/11 attacks.

This book shows that not every ship was filled with a wretched captain and crew. It made me stop and think about the mentors I have known and the gifts of their knowledge. Who would have thought that the kindness showed by an old sailor to a young man would bloom into the concept of rescue missions that still serve others today?