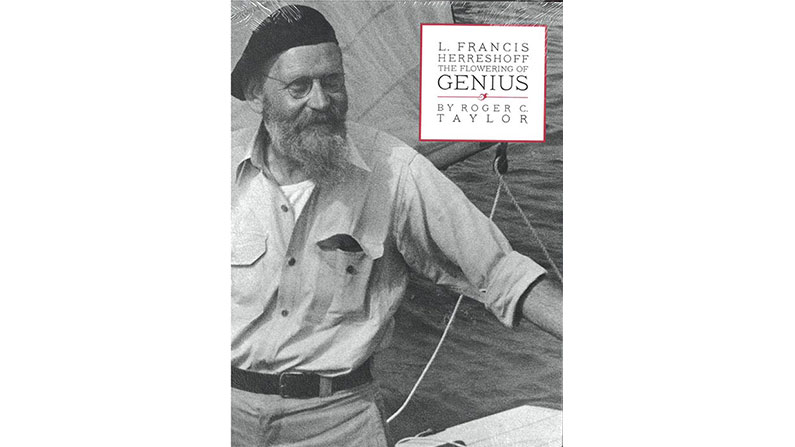 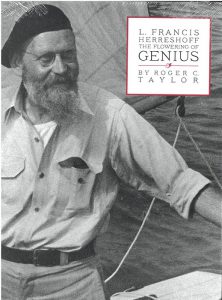 Nowadays, when the name Herreshoff is mentioned, I suspect most people conjure the face of L. Francis Herreshoff, not his more successful father, Nathanael, who won six back-to-back America’s Cup races from 1893 to 1920. This despite the fact that, as even Taylor admits, L. Francis Herreshoff’s design output was not nearly as great as his father’s, numbering 125 individual designs, of which only 70 were actually built. However, of those 70 designs, some, like his 1936 73-foot Ticonderoga, not only became racing legends, but to a very large extent defined the attributes that would come to define classic yacht aesthetics, most notably her clipper bow, low freeboard, and wineglass transom. The definition of what constitutes beauty in yachting developed throughout his long career, culminating in his 1956 design Rozinante, a classic canoe yawl, but with a distinctive Herreshoff interpretationThis book is Roger Taylor’s long awaited second volume of his biography of L. Francis Herreshoff. Volume 1 covered L. Francis’ youth and troubled relationship with his father, as well as his yacht design tutelage under Starling Burgess and the development of his own successful design career using his father’s Universal Rule to design notable and innovative R-Boats like Yankee and Live Yankee. The latter incorporated his distinctive pointed stern which was also used in his successful M-Boat, Istalena, and on his 1930 America’s Cup contender, the J-Class Whirlwind. Volume 1 ended with the great disappointment and even debacle of the Whirlwind America’s Cup campaign which was to change Herreshoff’s design trajectory dramatically as is so well covered in Volume 2.

Keep in mind that Herreshoff’s design career was hampered substantially by economic conditions well beyond his control, specifically the Great Depression which was immediately followed by World War II. Design commissions were few and far between over that fifteen-year period, and he, like a lot of designers at that time, depended on the interest and generosity of some close friends and patrons such as Waldo Brown and Billy Strawbridge. I must admit that the chapters on Strawbridge were of particular interest to me. Strawbridge had bought Istalena, and in 1935 commissioned Herreshoff to design a Twelve Meter. This was the pointed stern Mitena. Like almost all of Herreshoff’s designs she was strikingly beautiful, but that nod to beauty often did not work in favor of an optimum rating, with the result that while she turned many heads, she did not win many races. It was for that reason she found her way to Lake Ontario in the late 1930s to be sailed by the legendary Aemilius Jarvis, founder of my own Royal Hamilton Yacht Club and first winner of the Canada’s Cup. In 1939, an 80-year-old Jarvis brought Mitena to RHYC to take part the LYRA Regatta. Her photo from that regatta still adorns a wall of the clubhouse.

In the latter half of Herreshoff’s design career it was his connection with Rudder Magazine which popularized his designs and greatly expanded his influence on the sport. It was Rudder’s new editor, Boris Lauer-Leonardi, who in 1942 brought Francis on board the magazine as contributing editor. This was during a low point in Francis’ life with not only the recent death of his father, but also the wartime death of his longtime friend and patron, Waldo Brown, as well as the accumulated doldrums of the years of economic depression and war. Boris introduced the normally recalcitrant Francis to a vast sailing audience to mentor on his views on proper yacht design and the ills of modern yachting. This collaboration with Rudder launched Herreshoff on a writing career that produced all of his most famous works, including the two volumes of Common Sense of Yacht Design, The Compleat Cruiser, An Introduction to Yachting, The Golden Age of Yachting, and his biography of his father, Capt. Nat Herreshoff, the Wizard of Bristol. Most were serialized in The Rudder over his long association with the magazine. During that time he also published designs exclusively for the magazine, with some of them, such as the H-28 and the double-ended Rozinante, going on to spawn hundreds of home and professionally built replicas. The Rozinante design grew out of The Compleat Cruiser. It was during those years writing for The Rudder that L. Francis Herreschoff entered almost every sailing home in North America and around the world. He even had a devoted following in Australia. I should mention that Herreshoff would respond personally to all his correspondence. Although not mentioned in this biography, a very young George Cuthbertson wrote to Herreshoff from Canada for guidance in the 1940s on how to become a yacht designer. George cherished Herreshoff’s thoughtful reply for his entire life, and it had to have been instrumental in influencing his choice of career.

At over 560 pages, Volume 2 is larger than the almost 400 pages of Volume 1, but both are crammed with the history of every boat Herreshoff ever designed, whether built or not. For those that were built and still survive, Tayler follows the history of each to the present day. With such level of detail this is not light reading. It is literally overflowing with information and detail on people and boats and sometimes becomes a little overwhelming. Taylor has done a remarkable amount of research of all Herreshoff’s papers and drawings in the archives of Mystic Seaport and has sailed on a great number of Herreshoff designs and interviewed many owners, past friends, acquaintances, and family. Roger Taylor has intimately examined the life and work of an extremely private man, delving into the personal and business relationship that Herreshoff had with his few close friends, as well as his somewhat strange and ambivalent relationship with women, especially his infatuation with a 16-year-old while he himself was in his early 40s. This relationship was ended by the girl’s parents.

For those interested in the history of yachting and the extraordinary work of a somewhat solitary design genius, this book would be a valuable addition to your library. Just examining the detailed drawings of boats like Landfall, Tioga, Bounty, Mitena, Ticonderoga, Persephone, the H-28, and Rozinante, as well as his many “double paddle” canoe designs, frost bite dinghies, cruising powerboats, club racing one-designs, catamarans, and the many design concepts that never reached fruition, will occupy many hours of enjoyable browsing. This is an engrossing book and a valuable addition to the canon of yacht design.

Rob Mazza is a Good Old Boat contributing editor. He set out on his career as a naval architect in the late 1960s, when he began working for Cuthbertson & Cassian. He’s been familiar with good old boats from the time they were new and had a hand in designing a good many of them. 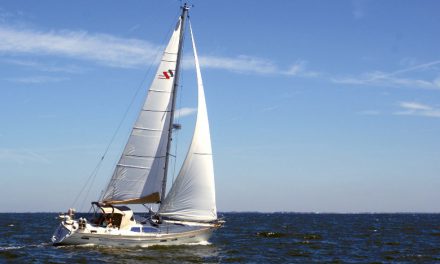 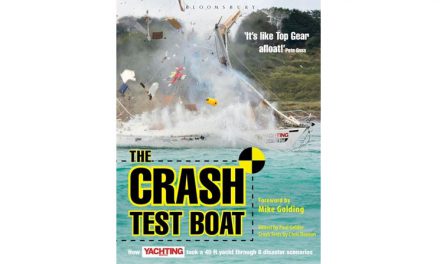