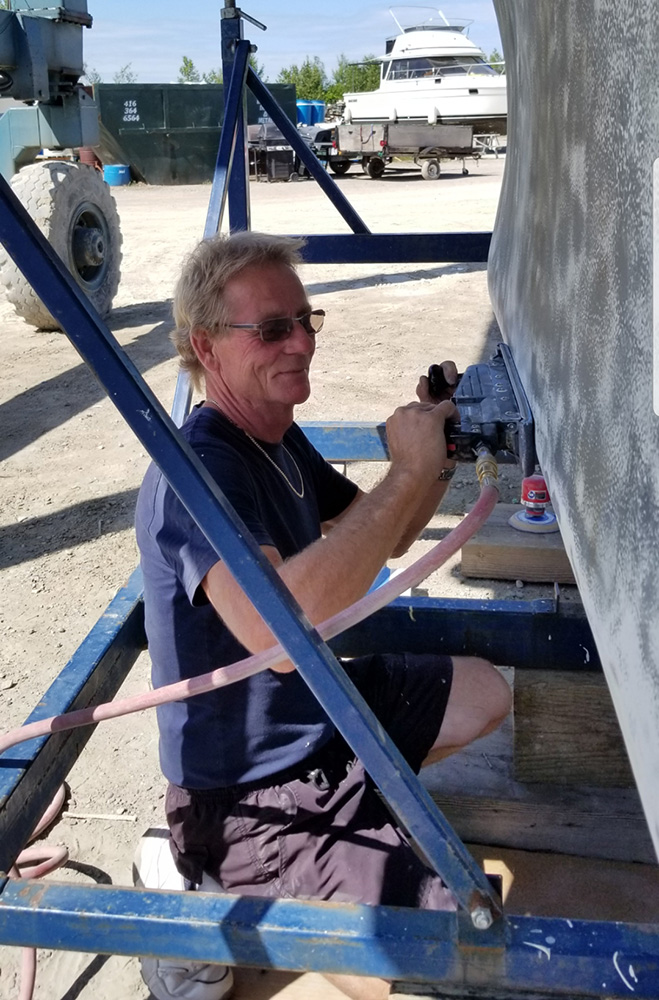 The ice from the previous Canadian winter had pushed, moved, and piled up a lot of rocks, wood, sediment, and lord knows what else, in the waterway. Above water, there was no way one could tell. No way one would suspect it would be there. No way I could have known.

BANG! And my Grampian 2-34 came to a jarring halt. She hit hard.

“What the…?” I’d been sailing this same area for 16 years without a grounding. Now, my Grampian stood firm on her keel, rocking slightly.

After some helpful souls towed me off the ragged mound, I turned the boat around and headed back to my slip at the marina. The boat seemed to handle well, but all the way home I worried and wondered about the damage that may have happened underwater.

The next day, I contacted a nearby Marina that services boats. They told me to bring her over. The marina was about an hour away by motor. Wasting no time, I headed out. The skies were sunny and windless. Not so much as a zephyr; so I threw on the iron jib and set sail to have the keel inspected.

At the mouth of the harbor, the engine began heating up. The temperature gauge needle was a hair away from the very top temperature reading. My blood pressure rose with it. I crossed my fingers, lowered the speed, and limped the rest of the way to the service slip.

A group of employees waited at the slip, a Travelift at the ready.

When she first came out of the water, I was relieved. At first glance, the hull and keel looked okay, dripping with weeds and water. But after pulling the loose weeds away, we could see that the keel had indeed been damaged. It looked as though the bottom edge of it had been pried apart. The bottom plate had become detached. There was also a stress crack in the stern part of the keel where it meets the hull. There was the overheating engine.

I left the boat with the yard and stayed in touch. It was an expensive repair and it took a few weeks to finish, but the outcome was instructive. 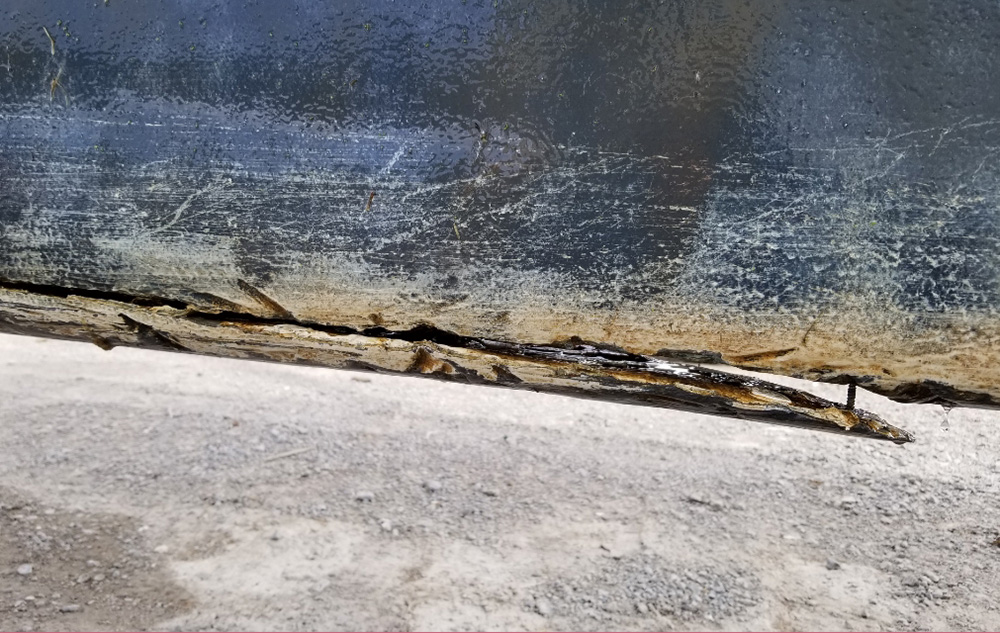 Before deciding to haul the boat and inspect for damage, I waffled. After the grounding, after being towed off, the boat handled fine and the bilge was dry. Was I being too cautious in hauling to inspect for damage? Why waste precious days during the sailing season? With nothing seeming amiss, couldn’t I wait to haul at season’s end? Ultimately, I decided to play it safe; I’m glad I did.

The yard foreman explained to me that 60 percent of the plate at the base of the keel was detached, ripped off by the impact. If I had left it unattended, it could have snagged something and been torn off completely, or possibly have caused me to become stuck. And the gash at the trailing edge of the keel was allowing water to penetrate the interior of the keel. Had this not been repaired quickly, further damage would have resulted. The yard had epoxied the keel with a 105 resin, coupled with a 205 slow hardener and a 405 filleting blend additive for bonding and strength, and screwed the plate back into place. They then sanded to fair the repairs and leave a smooth sealed surface. Anti-fouling with VC17 was the final step and the job was done! (The engine problem wasn’t an engine problem at all, but a faulty gauge. Whew!)

At the first opportunity, I sailed my boat to her home slip to enjoy the rest of the season. It is widely understood that to keep an older boat in ship shape, an owner can’t ignore the little projects that pop up. I now know too that when in doubt about some aspect of a boat, whether damage- or maintenance-related, it is best to investigate and attend to anything aboard that needs tending, as soon as possible, whether the solution is a DIY fix or requires a professional. Waiting is never prudent. And staying on top of things keeps this sailor’s cursing tongue quiet.

Deborah Kelso has been sailing on Lake Simcoe for the past 16 years. She's not a racer, but enjoys her leisurely sails. She owned a Grampian 31 for 12 years and currently sails a Grampian 2-34.

An Affair of Honor: Book Review